In-stream flow is a critical indicator of the river's health, especially during periods of flood or drought. The USGS monitors streamflow continuously at five key locations around the Neponset Watershed. Real-time data from these gauges is aggregated below.

For additional gauge sites and historical data visit the USGS Massachusetts Streamflow Page. Please let your legislators know that you value this and other scientific data provided by the USGS.

The USGS Norwood Gauge is located on the Neponset River Mainstem at Pleasant Street in Norwood, about a half mile upstream of Route One. It drains a watershed of 34.7 square miles, representing the “Upper Neponset Mainstem” and including parts of Norwood, Foxborough and Medfield, along with small portions of Sharon and Westwood, and virtually all of Walpole. Willett Pond, the Neponset Reservoir and Bird Pond are all in this watershed. Water levels are affected by groundwater withdrawals by three towns and several golf courses, as well as several industrial water withdrawals. Other factors include sewer system infiltration and inflow which are leakage into local sewer systems, none of which return to the Neponset. Lastly, there are substantial areas of unmitigated impervious surface and numerous impoundments upstream. This gauge has been operating since October 1939. 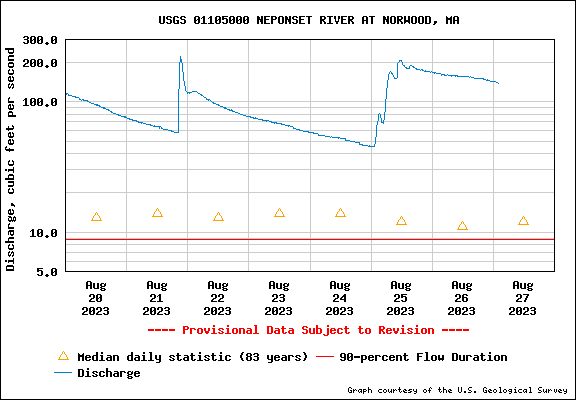 The USGS East Branch Gauge is located on the East Branch of the Neponset River in Canton, a short distance downstream of Washington Street in Canton center. It drains a watershed of 27.2 square miles, representing the most of the East Branch and including much of Canton, and a majority of Stoughton and Sharon. Lake Massapoag and Reservoir Pond are both in this watershed. Water levels are affected by groundwater withdrawals by three towns and several golf courses. There are more septic systems and fewer sewers in the East Branch watershed than in the Upper Mainstem and thus more treated wastewater is returned to replenish streamflows, and less water leaks into sewer systems as inflow and infiltration. Flows are also influenced by the substantial area of unmitigated impervious cover and numerous impoundments upstream. This gauge has been operating since October 1952. 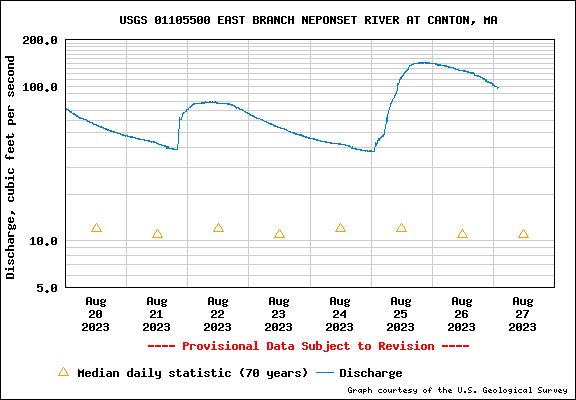 The USGS Fowl Meadow Gauge, officially known as the Greenlodge Street Gauge, is located on the Neponset Mainstem in Canton, a short distance upstream of Route 128 near the Route 128 MBTA station. It drains a watershed of 83.7 square miles. This includes all of the area measured by the Norwood and East Branch Gauges plus, the rest of Norwood, along with most of Canton and Westwood, and a bit of Randolph and Dedham. Ponkapoag Pond is in this area, along with most of the large wetland complex known as the Fowl Meadow. Water levels are affected by all the factors impacting the gauges upstream plus withdrawals for three additional municipalities and numerous additional golf courses, sewered areas, and impervious areas. Because of the influence of the Fowl Meadow wetlands, flows tend to change gradually here. This gauge has been operating only since May 2004. 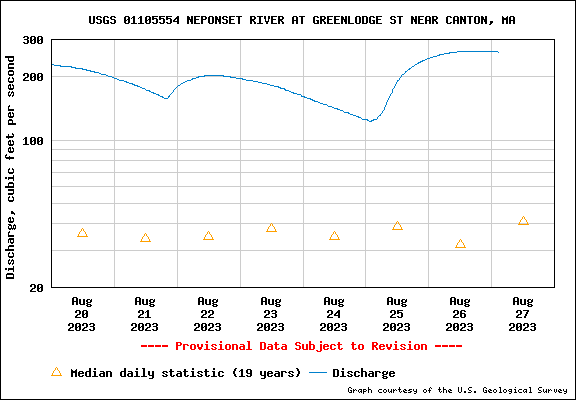 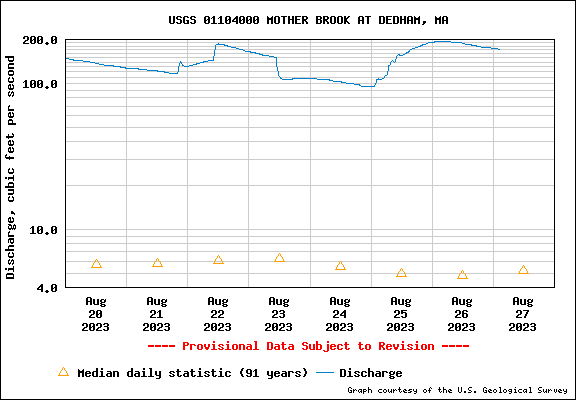 The Lower Mills Gauge, officially known as the Neponset River at Milton Village Gauge, is located in Dorchester/Milton Lower Mills a few feet downstream of the Baker Dam. It drains a watershed of 101 square miles, representing the entire freshwater drainage area of the Neponset River, including flows from all of the other gauges above, plus most of Dedham, Milton, Hyde Park, Mattapan and Dorchester. The only portion of the river not reflected in this gauge is the Neponset Estuary. There are no additional municipal water withdrawals in this area, however this gauge does reflect the addition of the most intensively developed portion of the watershed. The gauge is just barely located within the reach of tidal influence, which causes flow to spike every 12 hours in the provisional graph during periods of low flow. This gauge has been operating since November 1996.