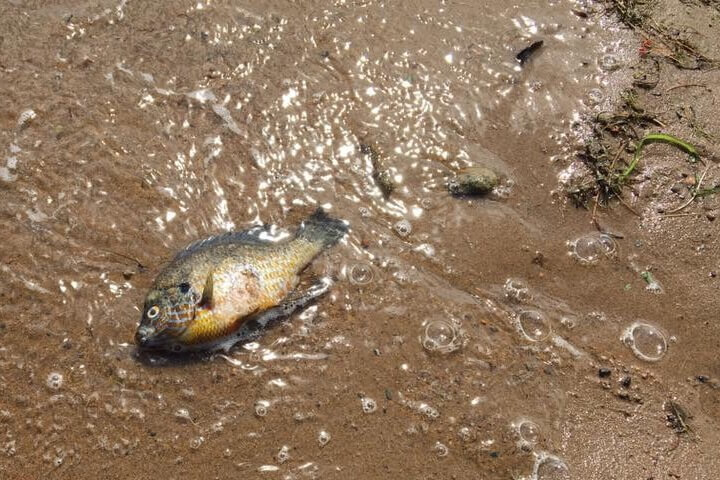 From Mass Division of Fisheries and Wildlife–

The sight of dead and dying fish along the shores of a favorite lake or pond can be distressing and trigger concerns about pollution. Fish do act as the “canary in the coalmine,” so it’s natural to think a fish kill is an indicator of a problem with human caused pollution. However, the vast majority of fish kills reported are natural events.

Natural fish kills are generally the result of low oxygen levels, fish diseases or spawning stress. Depletion of dissolved oxygen is one of the most common causes of natural fish kills.

In addition to reduced oxygen levels, late spring and early summer is when most warmwater fish species, such as sunfish (bluegill, pumpkinseed, largemouth bass) begin to spawn. At this time, large numbers of these species crowd into the shallow waters along the shore vying for the best spawning sites. These densely crowded areas become susceptible to disease outbreaks, especially as water temperatures increase. The result is an unavoidable natural fish kill, usually consisting of one or two species of fish.

When a caller reports a fish kill, a MassWildlife fisheries biologist determines if the kill is due to pollution or is a natural event. Generally, pollution impacts all kinds of aquatic life, therefore the most important piece of evidence for the biologists is knowing the number of fish species associated with the fish kill.

Fish kills in which only one or two species are involved are almost always a natural event. When it is likely a fish kill is due to pollution, MassWildlife notifies the Department of Environmental Protection (DEP). DEP takes the lead on a formal investigation which includes analysis of water and fish samples to determine the source of pollution. MassWildlife provides DEP with technical assistance by identifying the kinds and numbers of fish involved.