The Neponset River Watershed Association is working to improve the health of Unquity Brook in Milton. 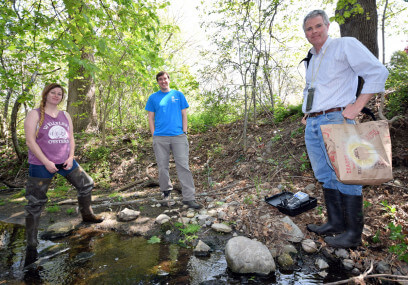 Past efforts to address the water quality issues in Unquity Brook have failed mainly because they were unable to locate where the contamination was coming from. This spring, with the help of a newly developed technology called “Microbial Source Tracking,” we were able to locate two major points of sewage contamination, and we are now one step closer to resolving the pathogen problem within the brook.

Over the course of this project we conducted 3 rounds of sampling (2 during dry weather, and 1 during wet weather), surveyed 14 potential stormwater runoff treatment sites, and developed conceptual designs for the top 3 sites. After sampling, we held a meeting with the Milton DPW to present our water quality data and to discuss our ideas for potential stormwater management improvements.  Read more…

Through a partnership with the Town of Milton, and with funding from the Department of Coastal Zone Management, NepRWA is monitoring the water quality of Unquity Brook in order to identify its major pollution sources.

The first round of sampling was completed on May 12th during dry weather. This mission gave us a good look at the stream’s health under normal conditions, and provided us with some clues about potential problem areas. The next step will be to monitor the stream on a rainy day to get a better understanding of the impact that runoff is having on Unquity’s water quality.

We plan to use the information we collect to suggest areas where Milton could get ‘the best bang for their buck’ in terms of managing water pollution, as well as locate areas were the town may need to make infrastructure improvements.

We’ll keep you posted as we make progress on this important project! For more information, contact Chris Hirsch at hirsch@neponset.org 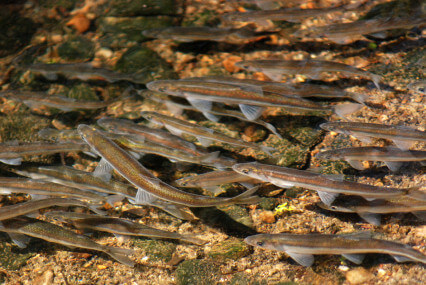 New Efforts to Clean up Unquity Brook in Milton

Unquity Brook is a small tributary of the Neponset River located in the town of Milton. It first emerges from a springhead near the Milton police station and flows northeast until it joins the Neponset Estuary at Gulliver’s Creek. The lowest portion of Unquity Brook, where it mixes with the salt water of Gulliver’s Creek, is an important spawning ground for the imperiled Rainbow Smelt. These fish spend most of their lives in salt water, but each year, in the spring, they travel up through the marsh to find fresh water tributaries in which to spawn. Unquity Brook is one of those tributaries.

NepRWA staff member, Tom Palmer, monitors the smelt migrations at Unquity Brook every spring, and noted that the smelt numbers have been down in recent years. Part of their decline may be due to the chronic water quality issues we have documented in Unquity Brook through our CWMN Program (Citizen’s Water Monitoring Network). Recognizing the plight of the smelt as a call to action, NepRWA has started an intensive monitoring project on Unquity Brook, with the goal of tracking down pollution sources, and ultimately resolving those issues.

Unquity Brook suffers from chronically high E.coli bacteria contamination, which is regularly above the state requirements for recreational contact. Our monitoring data also suggest that bacteria levels are often high regardless of precipitation. Unfortunately, in most urban watersheds we expect bacteria levels to be elevated during and immediately following wet weather because all of the pet waste and wildlife scat that gets washed into the nearest waterbody. In order to address the issue of contaminated runoff we are going to use wet weather monitoring data, along with several other pieces of information, to locate prime sites for potential treatment structures that will intercept and filter the runoff before it reaches the brook. 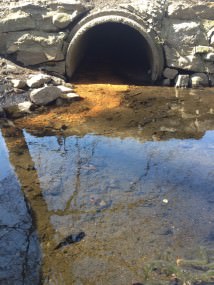 High concentrations of bacteria during dry weather often points to illegal sewer connections as a potential source of contamination. Previous NepRWA investigations discovered several illegal connections, which were fixed by the town of Milton, yet the problem still persists. Our new Unquity Brook monitoring project will try and clarify the issue of where the bacteria is coming from by using a newly developed technology called Microbial Source Tracking.

Every animal has different types of E.coli bacteria in their gut, and this new technology uses DNA to determine what type of E.coli is in the water, which is then linked back to its original source. This technology will help us pin point where the bacteria are coming from and help guide our efforts to eliminate those sources of contamination.

We’re hoping that this two-pronged approach of treating contaminated run off and tracking down illegal connections will be enough to save the smelt, and to bring Unquity Brook back into compliance with EPA water quality standards.