Land use along the Neponset River has had a lengthy and colorful history—from industrial to residential land use, commerce to quarrying. Many of these activities significantly have affected the health of the Neponset Estuary salt marshes.

In fact, Boston Harbor Watershed salt marshes have dwindled since the arrival of European colonists. Much of Boston’s marshes and the surrounding mud and sand flats were dredged or filled in the early 1800s to increase Boston’s acreage. This process severely degraded wildlife habitat — along with the area’s natural ability to process pollutants and tolerate storms. Young commercial fish species such as winter flounder, herring, clams, bay scallop, conch, dogfish shark, spiny shark and skate, dependent on salt marsh as a nursery, suffered, as did the bluefish and striped bass that use the marsh as a hunting ground. 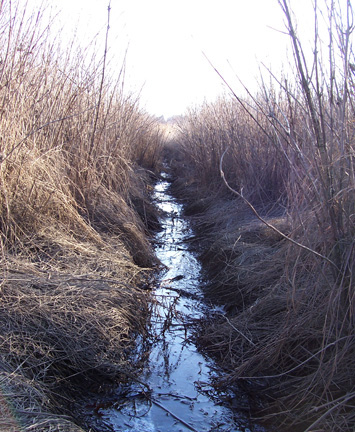 Over the centuries, the creation of ditches in marshlands around Metro Boston has altered the amount of water present, which in turn affects which plant and animal species can live in the area.

Fortunately, the revitalization of the Neponset Estuary salt marsh has begun.

In the summer of 2005, the Great Meadows Farms contracting company, under the direction of the Massachusetts Department of Conservation and Recreation (DCR), began to restore 15 acres of salt marsh in the estuary of the Neponset River Reservation, bringing five years of wetland restoration planning to fruition.

Years of dredge spoil deposition had raised the height of the marsh so much that salt water could no longer regularly flush the area. As a result, the salt marsh environment had slowly come to be dominated by plants less tolerant of salt water, such as the invasive Common reed (Phragmites australis), while native salt marsh plants like Smooth cordgrass (Spartina alterniflora) and Saltmeadow cordgrass (Spartina patens) had declined.

By repositioning much of the dredge spoils, the contractor was able to lower the wetland’s elevation and add to an adjacent wooded upland. The lowered marsh elevation exposes the area to salt water, thereby encouraging the return of a healthy salt marsh ecosystem. The contractor also breached dikes in the Neponset marsh, dug a new creek channel and planted Saltmeadow cordgrass along the new creek’s banks. 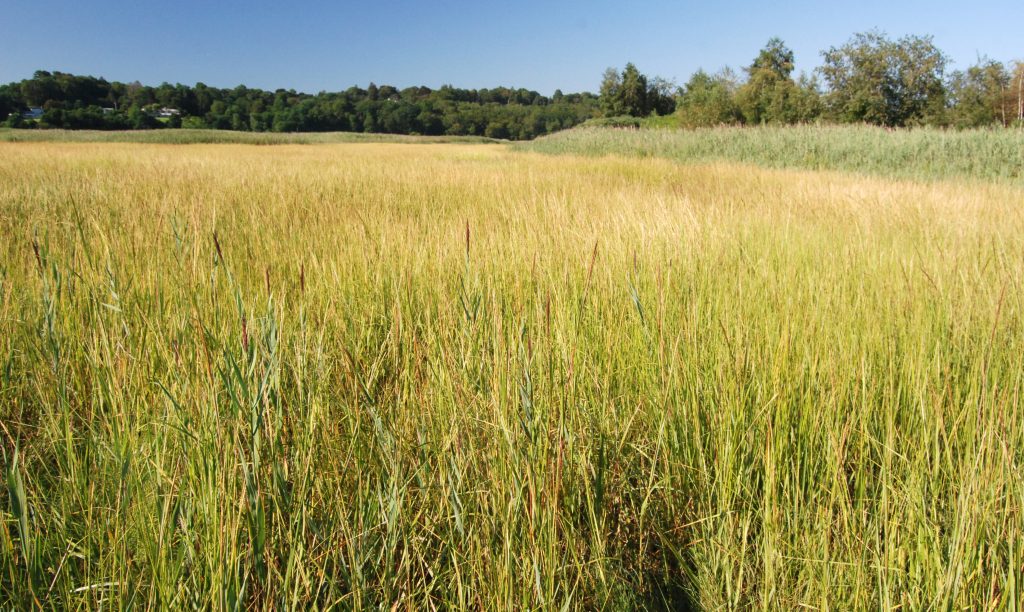 Photo of one of the restored areas of Neponset salt marsh in August 2011. Photo by Tom Palmer.

For the best view of the marsh restoration, visit Hutchinson’s Field in Milton, across from the Forbes House Museum on Adams Street. It may also be possible to view the project from the highway or from the Neponset Greenway. As the salt marsh restoration progresses, you’ll notice a shift from a yellow to a green hue in the marsh.

The Neponset salt marsh restoration project was led by the Massachusetts Department of Conservation & Recreation, with assistance from the USDA Natural Resources Conservation Service and the Office of Coastal Zone Management’s Wetland Restoration Program. Project funding has come from the US Fish & Wildlife Service and the Corporate Wetlands Restoration Project (CWRP). CWRP is a collaborative project between the MA Executive Office of Environmental Affairs, the Gillette Company, and the US Environmental Protection Agency.

The long-running conflict over public access and environmental improvements at the Neponset Landing property on Hancock St. in Quincy now will result in a much needed expansion of salt marsh restoration on Houghs Neck.

During 2011, Neponset River Watershed Association announced an agreement with Conroy Development Corporation to contribute $150,000 toward the Hough’s Neck salt marsh restoration project which is being managed by the US Army Corps of Engineers. The money will be matched on a three-to-one basis by the Army Corps for the Broad Meadows Marsh Restoration Project, enabling the restoration of approximately eight additional acres of salt marsh.

The project will remove sediment and invasive Phragmites reeds from the restoration site to restore approximately 31 acres of salt marsh, including salt pannes and tidal channels, four acres of wet meadow grasses, and 23 acres of coastal grasslands. Public gravel pathways also will be built.

Sediment had been dumped on the wetland during dredging activities in the 1930s and 1950s. Unfortunately, that sediment increased the elevation of the landscape, reducing its suitability for salt marsh plants and wildlife and allowing incursion by invasive Phragmites reeds.

To ecologically restore this area, the excess sediment will be removed, restoring connection with the surrounding water and thereby restoring the site’s function as salt marsh and salt ponds.

The restoration project will enable native salt marsh grasses and other associated species to once again grow on site and provide wildlife habitat and wetland function.

Learn more about the project: