Thank you to our Project Partners

The Town of Norwood and the Neponset River Watershed Association have partnered on a Municipal Vulnerability Preparedness (MVP) Action Grant for the Traphole Brook Flood Prevention and Stream Restoration project.

Additional funding and support in project design and implementation have been provided by the Mass Division of Ecological Restoration and the Trustees for the Blackburn and Union Privileges Superfund Site Natural Resource Damages Settlement (Mass Department of Environmental Protection and U.S. Fish and Wildlife Service). Greater Boston Trout Unlimited has also provided funding and volunteer power to help complete this project 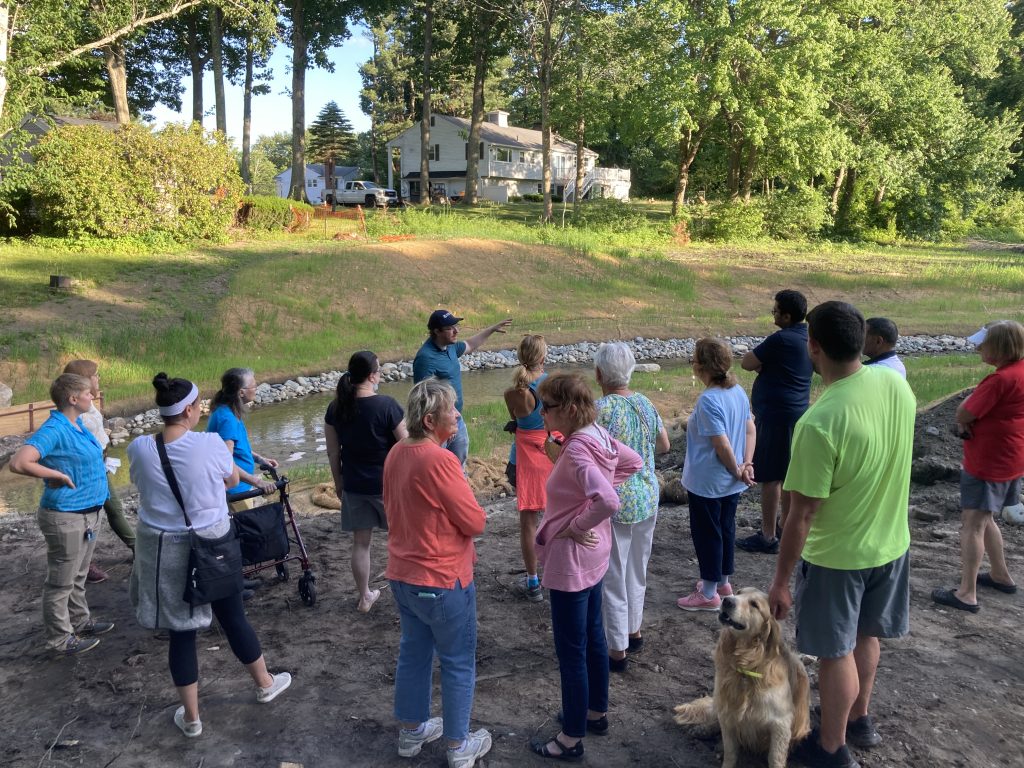 We held our second neighborhood meeting on Tuesday, June 14, and invited community residents to see the progress of the dam removal and new channel for Traphole Brook.

We held a very successful listening session, where stream abutters, apartment residents, and other members of the Mill Pond community told us what improvements they’d like to see at the new Pezwick Park, as well as current climate change-related issues that they’d like to see addressed. Suggestions included park benches, a maintained trail path, and areas for green infrastructure, like rain gardens or tree trenches.

We want to thank both the Town of Norwood and the MA Division of Ecological Restoration for participating, as well as our MVP Regional Coordinator, for attending the listening session. We also want to thank Norwood Gardens Apartments for hosting the event.

Any further suggestions for improvements to climate infrastructure or Pezwick Park can be directed to NepRWA River Restoration Director, Sean McCanty, at mccanty@neponset.org or Conservation Agent for the Town of Norwood, Holly Jones, at hjones@norwoodma.gov 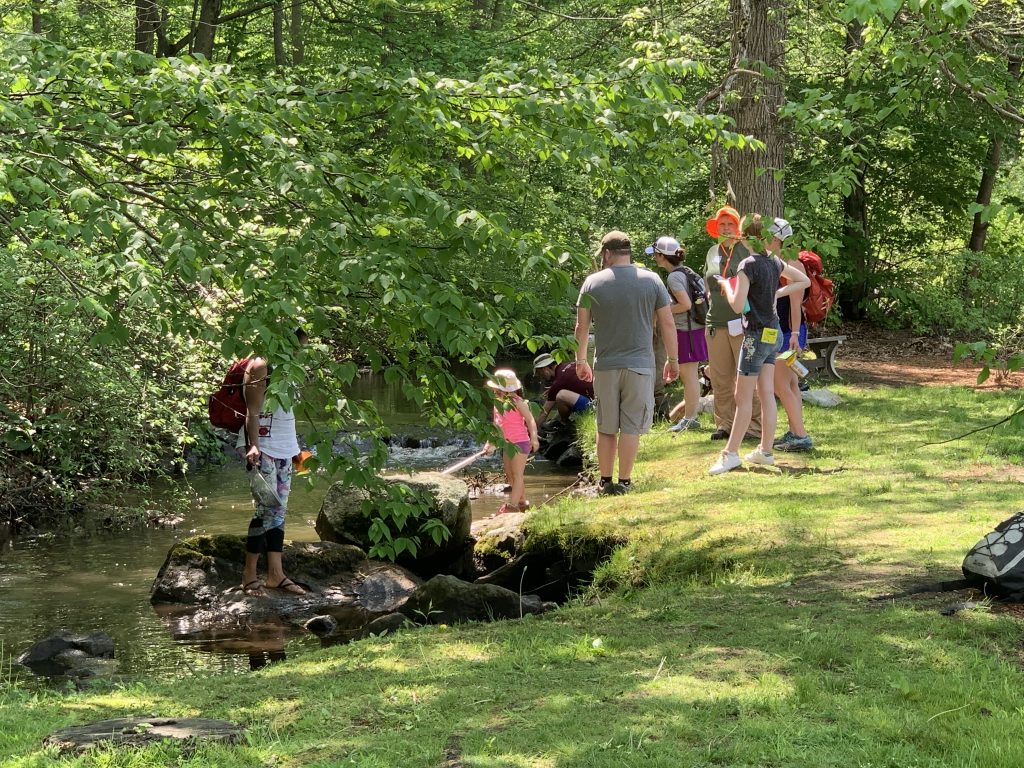 BioBlitz attendees at Traphole Brook in Norwood. Photo by Madeleine Ritterbusch, May 2022.

The BioBlitz at Traphole Brook in Norwood was a lot of fun despite the unusual spring heat. About 45 people attended and spread out across the brook and former Mill Pond to seek out creatures and plants. Among their discoveries, they found:

We’d like to thank the following volunteers for their important roles during the event:

Phase 1 of the construction is done! The downstream section of the new channel on Traphole Brook was switched on as of May 12th. Water is now flowing through woody debris and rocky bottom in this section of Traphole Brook for the first time in over 200 years. Already trout have been spotted pooling in the created channel section.

While the work continues on the upper section and the banks and flood plain need some revegetation, this is a major step in having this area be a refuge for trout and other fish while also providing some flood resilience without the danger of a dam failure. 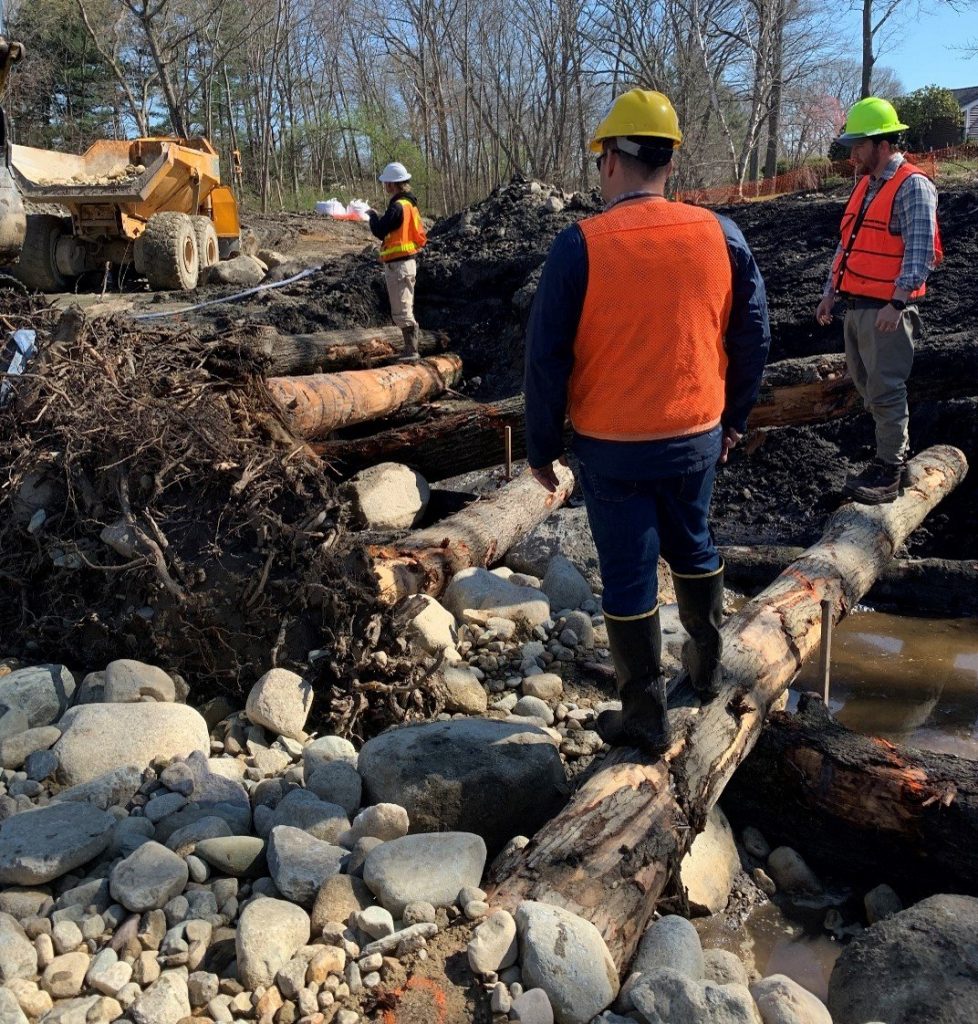 Watch water flowing through the new channel — from the old Mill Pond into Traphole Brook.

Thanks to a 5-hour monumental effort from 17 volunteers, we were able to install 3 12-foot tall trees – each well over 600 pounds – and 7 medium-size shrubs. These plants will help shade the brook from the sun, sequester carbon, stabilize the banks with their roots, and provide habitat for birds and other animals.

The trees were purchased by the Town of Norwood using funds supplied by the Natural Resources Damages Program and help supplement the ongoing project to turn Mill Pond into a free-flowing climate-resilient stream.

We owe a huge thanks to all our partners (GBTU, the Town of Norwood, and NRD), the landowners, and of course our tireless volunteers!

This past Saturday, NepRWA and the Town of Norwood organized a bank stabilization project at Traphole Brook, below the former Mill Pond on Sumner St.

More than 15 volunteers came together to collect and deploy live “tree stakes” along the bank, which will grow roots and help to hold the soil in place while also providing great fish habitat. 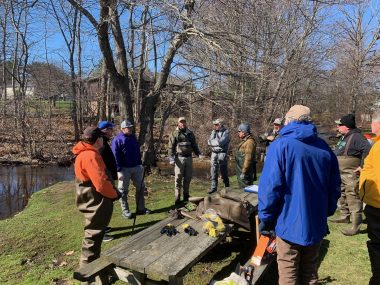 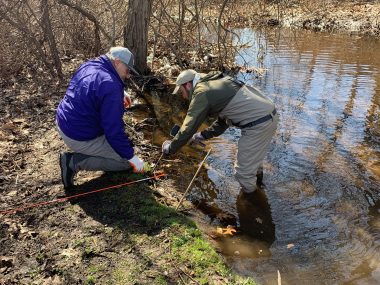 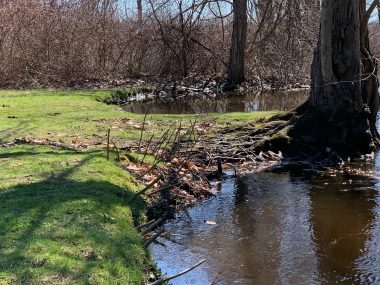 The Mill Pond Dam is out!

Construction crews took down the dam last week after diverting Traphole Brook around most of the former pond. The dam has existed in some form or another for more than 100 years, but unfortunately due to increasing silt and sand, the pond became shallower and shallower, raising stream temperatures and increasing the risk of severe flooding. This created a problem, both for the native brook trout and the people who live around and downstream of the pond.

Now that the dam has been removed, the construction team is working to remove the accumulated sand and sediment, reshape the stream channel, and add in rocks and woody habitat for fish and insects to thrive. Although there is still a lot to do, the removal of the dam itself marks a huge turning point for Traphole Brook.

The rest of the restoration will take place over the next few months and will result in a more climate-resilient stream for both one of the few populations of brook trout remaining in eastern Mass as well as for the residents who live near the brook.

A great deal of thanks goes to the Town of Norwood and Mass Division of Ecological Restoration, as well as the construction crews who removed the dam. Additional thanks go to the Greater Boston Chapter of Trout Unlimited, which helped secure funding and has supported the conservation of this high-quality stream.

This project would not have been possible without the groundwork and funding provided by the Massachusetts Natural Resource Damages Program, coordinated by the Trustees at MassDEP and the U.S. Fish and Wildlife Service.

Watch footage of the deconstruction, with interviews from Holly Jones, Norwood Environmental Planner and Conservation Agent, as well as with Ian Cooke, Executive Director of NepRWA. Thanks to Norwood Community Media for posting the video!

Current plans are to remove the dam in mid-February. Stay tuned for more updates and photos!

Flashboards removed on the dam so the pond can drain Photo by Sterling Worrell, Greater Boston Chapter, Trout Unlimited, January 13, 2022.

After 2 years of study, applying for funds, and seeking contractor bids, the Mill Pond Dam at Pezwick Park is finally being removed. The removal of the dam will improve the area’s climate resilience by reducing the risk of extreme flooding with more intense and frequent summer rain events. By rebuilding the stream channel and revegetating the banks, the area will also become more hospitable to its resident Brook Trout populations, by allowing for increased migration and keeping the water colder.

Construction officially started this month, with the flashboards being removed from the dam in order to allow the impounded water to slowly drain down. Meanwhile, the construction companies have been hard at work preparing the access points for their machinery and getting ready to divert the stream during the demolition phase. Things will be moving fast, so keep an eye out here for more updates and pictures as the project progresses!

The project is expected to proceed through June 2022, and during the spring we will be holding two outdoor educational events, as well as a final wrap-up meeting. All information about these events will be posted here as well, so be sure to check back!

Questions about the project can be directed to NepRWA River Restoration Director, Sean McCanty, at mccanty@neponset.org or 781-575-0354 x302

Watch the drone flyover of Traphole Brook in Norwood. Be sure to look for the Mill Pond Dam!

On July 12, the Town of Norwood was awarded a $682,421 Municipal Vulnerability Preparedness (MVP) Action Grant for the Traphole Brook flood prevention and stream restoration project.

The grant will fund the construction to remove the Mill Pond Dam in Norwood, rebuild the stream channel, and revegetate the riparian zone. NepRWA and the Town of Norwood collaborated on this grant proposal, which comes after two years of study, sediment testing, and permit applications.

The removal of the dam will provide almost full connectivity to Traphole Brook (save a couple of undersized culverts!), which is eastern Massachusetts’ best trout stream. It will also help with climate change resiliency by reducing flood risk to the downstream neighborhood, another example of the synergy between habitat restoration and climate safety.

Construction is expected to begin in January 2022 and wrap up by June 1, 2022.  During this time, we will host at least two public events to get people outside and showcase the project. Stay tuned!

William Sumner or his heirs likely built the dam initially to serve a grist mill on Traphole Brook (hence “Mill Pond”). It was built sometime between the late 1700s and 1851 when it first appears on a map.

By 1905, Carlotta Emerson owned the property and she and her husband Dr. Nathaniel Emerson build an icehouse on the pond and harvested ice from it. The ice house stood at least until 1920.

Since the town has owned it, the pond has been used for boating, fishing, swimming, ice hockey, and skating, but in recent years the pond behind the dam has begun to become choked with silt and start turning into a shallow emergent wetland. The silt is partially what represents the flood risk as if the dam failed it could be washed downstream and choke up the channel.

The dam itself is a barrier to fish, and the shallow wetland forming behind the dam heats up the water and makes it harder for cold-water species like brook trout to survive. 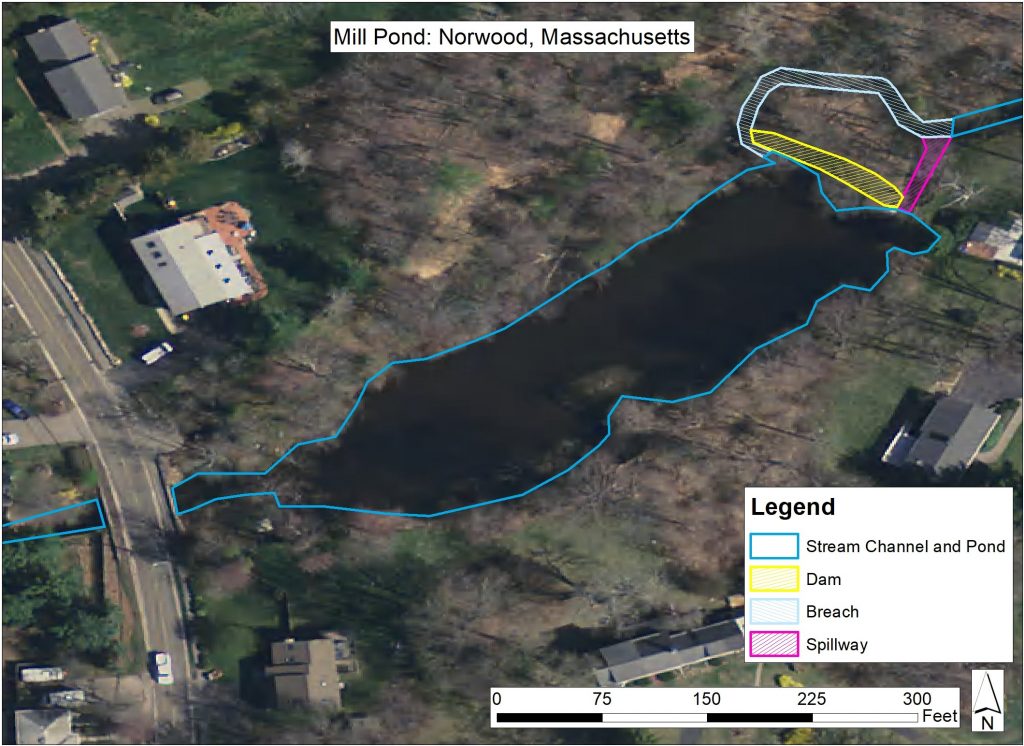 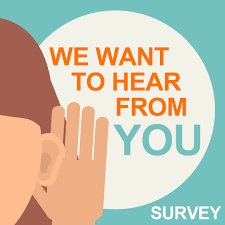 Your answers will help us plan for climate-related issues in the Mill Pond/Norwood Garden Apartment neighborhood — and more recreational opportunities in Pezwick Park. We look forward to hearing from you!

For any additional questions or comments about climate issues in your neighborhood — or if you would like more information — contact NepRWA River Restoration Director, Sean McCanty at mccanty@neponset.org

Take me to the survey!