Our volunteers have been hard at work taking water samples this year. The results are in for July 2014 and show dissolved oxygen is at low levels throughout the watershed in the summer months. 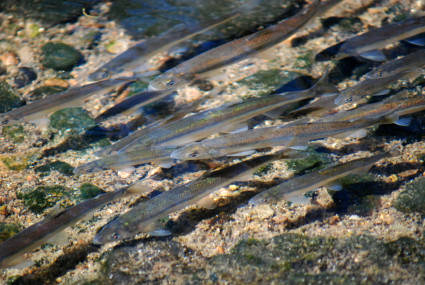 Dissolved oxygen is one of the water quality parameters that our volunteers measure in the field as part of our Citizen Water Monitoring Network (CWMN).  Oxygen levels in the river are especially important to fish and other aquatic species that need to breathe in the water. Dissolved oxygen levels have been dropping during the summer months all around the watershed.

The results from our dissolved oxygen monitors can be viewed at the following links.

The large green symbols indicate healthy levels of dissolved oxygen, and as the symbols get smaller and closer to red they show unhealthy levels.  You can see how the dissolved oxygen concentrations decrease over the summer.  Dissolved oxygen was as low as 0.8 mg/L in July 2014, well below the threshold of 5 mg/L set by state water quality standards.  The lowest dissolved oxygen level was measured at site PQB036, on Pequit Brook in Canton near the inlet to Reservoir Pond. 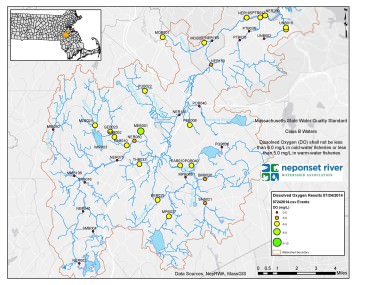 July 2014 Dissolved Oxygen Results. Click the links above to see May and June results.

In the summer, as temperatures of the air and water rise, less oxygen is able to dissolve into the water.  In addition, pollutants in the water such as lawn fertilizers contribute to overgrowth of aquatic plants.  These plants will eventually die and decay, and the decay of these plants consumes oxygen in the water.  You can help reduce the impact of yard care on our waterways by following some of our tips on greener yard care.

Our Citizen Water Monitoring Network (CWMN) has been busy collecting water samples from the Neponset River and its tributaries this summer.  So far we have held three sampling events: in May, June, and July.  We are still looking for a few volunteers to help out with our events in August, September and October!  If you would like to be involved, please contact Sarah Bounty 781-575-0354 x302 or bounty@neponset.org.