Water quality results are in for September 2014. E. coli levels are lower than August, which is a good thing for our river.

The results are in for our September 2014 sampling date!

The map below shows the bacteria data collected from the Citizen’s Water Monitoring Network (CWMN) sampling event that took place on September 25, 2014. High bacteria levels are an indication of contamination in the water. From this data we can see that 13 of our 41 sites exceeded the state E. coli standard of 235 MPN/100mL. This is lower than what we saw during the month of August. The sites in which the state standard was exceeded are represented on the map with the large orange and red dots. Site MEB001 located in Norwood at the Meadow Brook was the location of the highest level of bacteria, with almost six times the state E. coli limit.  Most of the sites found further downstream have high levels of bacteria since a lot of the bacteria accumulates as it makes its way down the river. 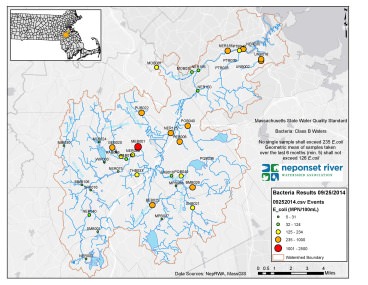 This past September was one of the driest Septembers that we have seen in a while. We only received a total of 0.33 inches of rain throughout the whole month. The rainfall during this time of year usually averages about 4 to 5 inches. Because of this lack of precipitation, there were four sites where samples could not be taken. Three of those sites were located in Milton on Pine Tree Brook and Unquity Brook while the other was located in Canton. Several volunteers also noted that the water level was extremely low at their sites.

The September sampling date and the three dates leading up to it were completely dry. The lower levels of bacteria found in the river can be partially explained by the lack of rainfall before and during the sampling date. When there is more rain, there is also more runoff from roads and parking lots that carry bacteria and other contamination into our river and its tributaries.

NepRWA is working to help towns in our watershed address polluted runoff through the Neponset Valley Stormwater Collaborative and other projects. You can read more about the Collaborative here and about a special project in Westwood here.

If you have any questions about the data, or want to find out more about becoming a CWMN Volunteer, please contact Environmental Engineer Sarah Bounty at 781-575-0354 x302 or bounty@neponset.org.