This month, bacteria levels were higher than usual, despite the extremely dry weather and low water levels.

Sampling took place on the morning of Thursday, July 21st, at 41 different locations in the Neponset watershed. Results can be found here and bacteria measurements are illustrated on the map below. 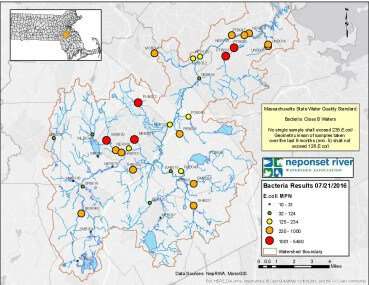 The drought that the watershed is experiencing this summer has had observable effects on the physical characteristics of the Neponset River and its tributaries, as well as on the quality of the water.

Looking at the bacteria map, you can see that sites with orange and red dots are above the limit for swimming and fishing in class B waters, at 235 most probable number (MPN) of E. coli. 17 sites out of the 36 total tested over this limit.

Usually bacteria levels this high are observed during wet weather sampling due to storm water runoff. However, this month bacteria levels were higher than usual despite the extreme dry weather.

This could be the result of a few factors. With water levels being so low due to drought, there is an increased chance of sediments being mixed in with the water samples as volunteers are forced to scrape sample bottles along the stream bed to collect their samples. Any E. coli existing within these sediments might increase the bacteria levels of the water sample.

Another factor might be that our water samples are becoming more concentrated due to a lack of rainfall and increased evaporation. 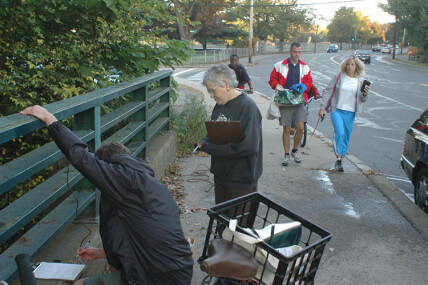 This year, July had eleven days where the temperature exceed 90 degrees Fahrenheit, while July 2015 only had two.

If there is continuous input of E. coli into a waterway from animal waste, but a less amount of water, the bacteria levels per sample will be higher.

It’s difficult to pinpoint the exact reason that our bacteria results were so high this month, but we will be running a few tests to see to what extent the sediments are affecting our samples.

As always, a very big thank you to our volunteers who took samples this month!

If you are interested in becoming involved with CWMN, please reach out to Meghan at meghan@neponset.org.