A 40B project raises questions about water quality 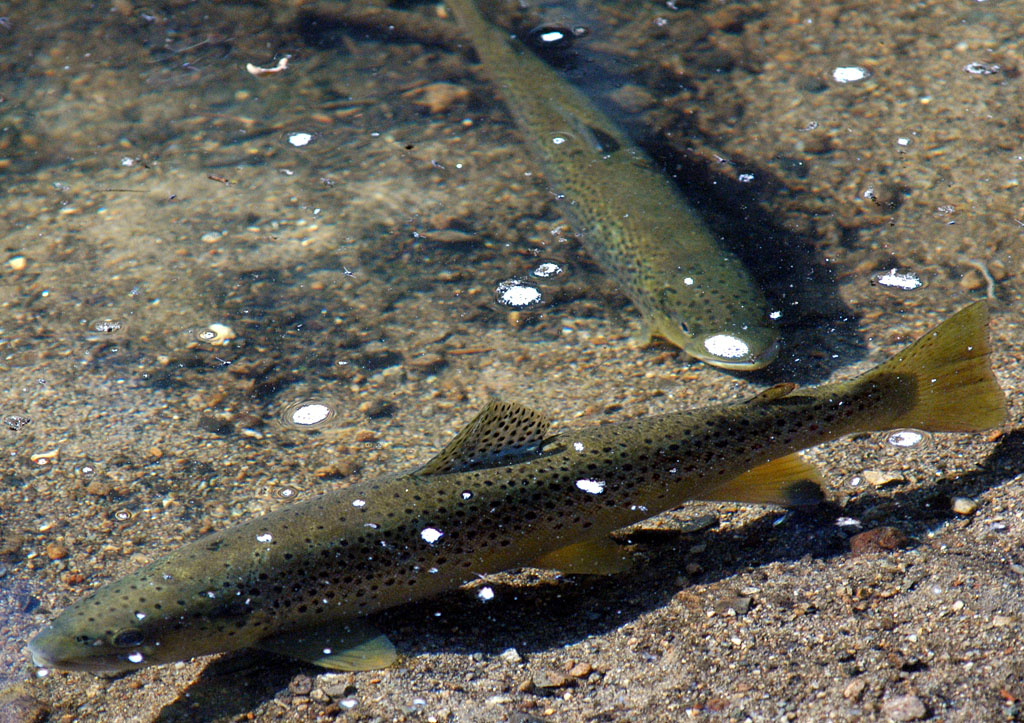 Last year a Framingham developer proposed to build a 174-unit apartment complex including affordable housing on a sloping four-acre meadow in a neighborhood of single-family homes on Moosehill Road in Walpole.

The sandy meadow is dry on top but leaks badly at its lower edges, since it overlies the downslope end of a high-yield aquifer stretching a half-mile southwest to Rt 95 and the Sharon line. The aquifer, a deep bed of sand and gravel laid down by glacial meltwater on Moose Hill’s north shoulder, captures rainfall via infiltration and releases it at springs along the meadow’s gravelly margins.

These springs continued to flow through the long dry spell that began last July and lasted until Thanksgiving, releasing water that fell as rain earlier in the year and migrated downhill through the buried aquifer. Spring water, particularly in summer and fall, is cooler and clearer than water that flows out of wetlands or water bodies, and becomes indispensable for trout and other wildlife that can’t tolerate warm or stagnant water. 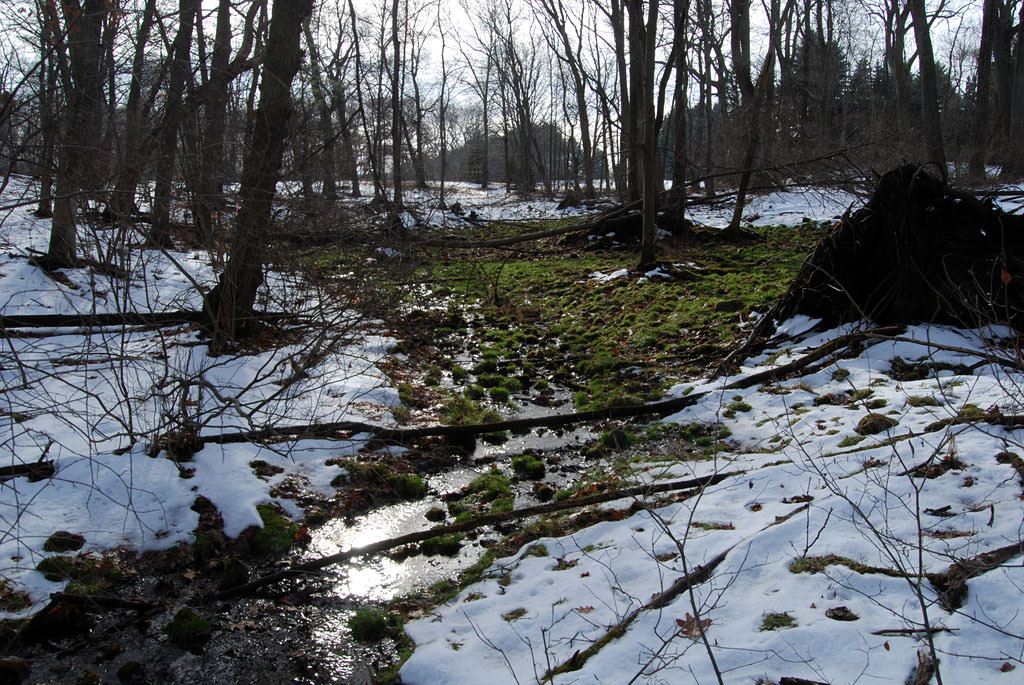 A spring emerging at edge of meadow proposed for 174 apartments, 272 Moosehill Road, East Walpole, 12/21/13. The warmer groundwater has melted the snow.

The streams beginning at the springs at the meadow’s lower edge run a short distance through wet woods before emptying into Traphole Brook. Traphole drains the east side of Moose Hill and runs north under Rt 95 and Rt 1 through Walpole before joining the Neponset in Norwood. In 1999 the state’s Division of Watershed Management sampled Traphole’s fish community at Coney St. in Walpole, not far downstream from the meadow, and found 47 brook trout and 29 brown trout–more trout than were counted at any other site in the entire Neponset basin.

These fish rely on the cool, dependable water emerging from the springs at the meadow’s edge. What might happen to these flows if the meadow were paved over for 174 rental units?

Last summer Walpole neighbors concerned about the size and density of the project contacted NepRWA and asked for help reviewing it. The developer had submitted wetland delineation plans to the Conservation Commission–were they accurate?

The original plans did not show either the springs or the streams issuing from them. The Commission required that both be added, but agreed with the developer that the streams were intermittent rather than perennial–an important distinction, since the state’s wetland regulations protect a 200-ft buffer on both sides of most perennial streams, but allow development right up to the edge of intermittent ones. Plans called for the buffer, known as the Riverfront Area, to be cleared, graded, and filled with buildings, parking lots, and detention basins.

NepRWA agreed with the neighbors that everyone, the trout included, would benefit if the project was scaled back and pulled out of the buffer. But there would not be any buffer unless we could convince the Conservation Commission that the streams beginning at the springs were perennial, and flow throughout the year. This we were unable to do, since the Commission relied on a statement in the regulations that streams with watersheds of a half square mile or less are, by definition, intermittent, and the watershed feeding the springs was only a third of a square mile. 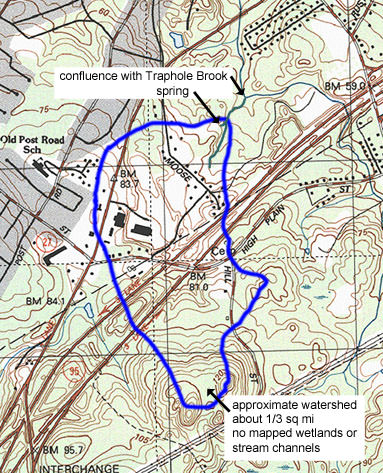 NepRWA argued that this definition was a presumption only, and could be overcome by direct observation. Intermittent streams run dry in dry weather, but these spring-fed streams continued to flow through a particularly rain-starved late summer and fall, as the Commission had itself observed during its site visit in mid-October–why not base the decision on the evidence? But the Commission considered itself obliged to map the streams as intermittent.

The Wetlands Protection Act, widely regarded as the strongest conservation law in Massachusetts, requires anyone proposing work in or near wetlands to go before the local Conservation Commission and describe the work in a public hearing, thereby providing abutters, neighbors, and anyone else the opportunity to estimate the impact the project might have on protected public interests associated with wetlands. In addition, the Act provides that any ten residents of a community where the project is located may appeal a decision of the Conservation Commission to the state Dept. of Environmental Protection.

In this instance a group of East Walpole residents who had attended the hearing agreed that years of personal observation indicated that the springs emerging at the edge of the meadow were perennial. These fifteen neighbors wrote an appeal asking the DEP to reverse the Con Comm’s finding that the streams were intermittent. They were aware that if the 174-unit project, known as Barberry Homes, were built right up to the edge of the springs, then the runoff from six or eight acres of rooftops and parking lots would enter them directly, and this stormwater–warmed by hot asphalt in summer and laden with salt and sand in winter–would proceed directly to the trout habitat just downstream. If, however, the springs were mapped as perennial and protected by the 200-ft buffer, this same runoff could be recharged to groundwater some distance upslope, and filtered and cooled before it emerged at the surface.

The DEP accepted the neighbors’ appeal and visited the site in December. Although snow had buried the meadow, the springs were still flowing. The DEP reviewer walked the streams, took dozens of photos, and drove away with the packet of evidence the neighbors had prepared. He said a decision would be issued sometime after the holidays.

If the DEP were to find in favor of the neighbors and determine that the streams are perennial, it would not prevent the 13-acre meadow on Moosehill Road from being developed, but it’s likely that the 174 apartments would have to be reconfigured and downsized to minimize impacts to water quality that occur when riverbanks are cleared and paved. There is a difference between streams maintained by groundwater and those fed by runoff, an obvious difference; the latter tend to flow only during storms, and cut deep channels choked with trash and gray sand. This difference is apparent in the wet woods below the meadow at the project site, where the spring-fed streams are joined just downslope by another stream originating at the mouth of a 1000-ft culvert draining a half-mile stretch of Rt. 95. That stream is indeed intermittent, and in dry weather is reduced to a deep trench connecting a series of puddles. 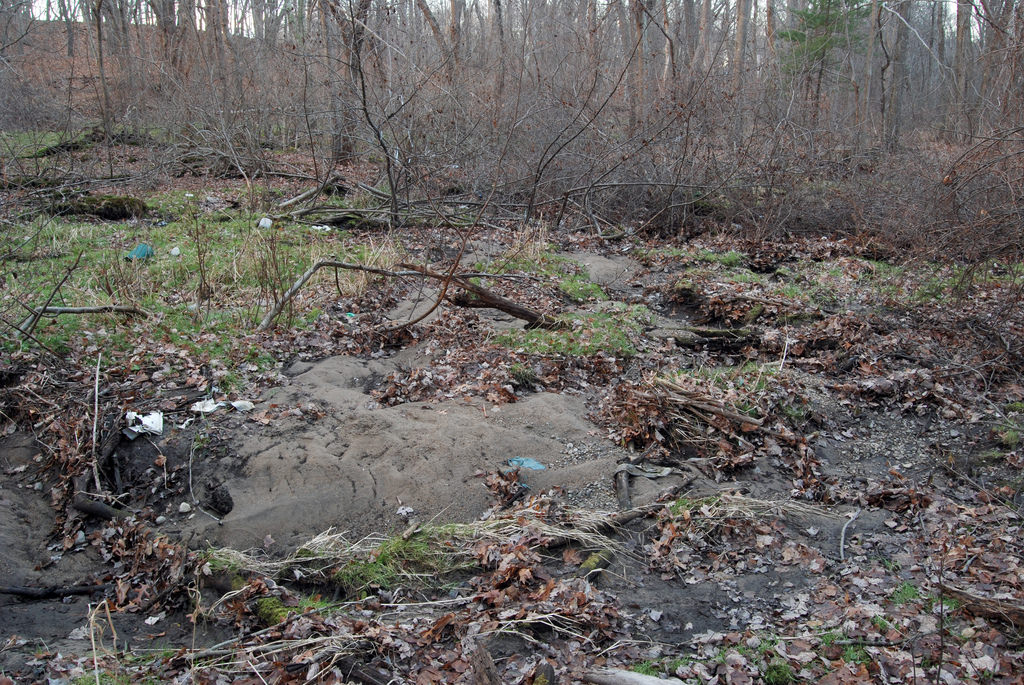 Many of the families on Moosehill Road have been there for generations, and remember when the meadow was a chicken farm, which benefited from the good drainage and abundant well water. They liked to walk their children from the meadow down a meandering woods path to a bend in Traphole Brook, where there is a broken-down boulder dam built long ago by who-knows who. You can stand by that dam and see little brown torpedo-shaped fish which may or not be trout dart along the edges of the adjacent pools. That is a rare sight nowadays.

One response to “Trout Water in East Walpole”