NepRWA Advocacy Director submits formal comments to the EPA on what could be the most important new government effort to reduce water pollution in decades. 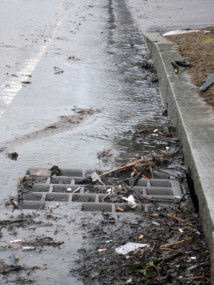 Over half of our water pollution today comes from “stormwater runoff,” rainwater which picks up oil, grease, bacteria, fertilizers and pesticides as it flows off parking lots, sidewalks, lawns and roads and into the municipal storm drains on our streets. These storm drains provide very limited pollution reduction before discharging directly into our rivers, streams and ponds (contrary to common belief, storm drains do not connect to sewage treatment plants).

The U.S. Environmental Protection Agency (EPA) has proposed to make towns do much more to reduce stormwater pollution. For example, towns are to be given a 5 year timetable to identify and eliminate all illegal connections (such as sewer pipes) to storm drains. EPA has also proposed that towns adopt ordinances which require development projects to treat and infiltrate the first inch of rainfall in each storm (85% of the annual rainfall) back into the ground. Infiltration is the only effective way to eliminate bacteria from runoff, and bacteria is the number one pollution problem for the Neponset watershed.

Unfortunately, EPA will only require towns to apply the so-called “1 inch rule” to developments of an acre or more, which are pretty rare in a largely urban and suburban watershed like ours. While NepRWA commented to EPA that this rule should apply to much smaller developments, we’re not terribly confident that it will do so. So we’ve been working for the last two years, and will continue to work in the future, to get our towns to take the initiative themselves.

At our urging, the Town of Westwood will be proposing at its spring town meeting to require local stormwater management permits for projects as small as ½ an acre. Equally important, the new ordinance will direct the local Conservation Commission to look at projects as small as 5,000 square feet and, if necessary, direct them to implement practical and inexpensive stormwater management measures.

In addition, as part of the Association’s ongoing effort to work cooperatively with local communities to reduce water pollution, our Watershed Environmental Engineer, Sarah Bounty, is teaching towns how to better identify illegal connections of sanitary sewer pipes to storm drains.