Update: YES, a Stormwater Utility IS Right for Milton!

Update, February 12 — Congratulation to Milton, which became the 10th community in MA to adopt a Stormwater Utility at their Special Town Meeting last night! It was a substantial two hour debate with opinions expressed on all sides, but in the end the measure was enacted by a significant margin on a voice vote. The Patriot Ledger provides an account of the meeting.

Special congratulations goes to DPW Director Joseph Lynch for his hard work in putting together and clearly explaining the proposal, and to Selectman Tom Hurley, who provided the political leadership to move the measure forward, and make a successful case to the voters. NepRWA and the Metropolitan Ara Planning Council were privileged to provide the town with technical assistance and outreach support.

Original post By Ian Cooke, February 2, 2016 — Cities and towns across the state universally fund drinking water and wastewater (aka sewage) services through water and wastewater fees. The fees that homeowners and businesses pay are based on the amount of water they use or sewage they generate. But stormwater—the third and often neglected branch of municipal water infrastructure, which causes violations of water quality standards in an amazing two-thirds of the Commonwealth’s waterways—is almost universally funded through the property tax.

Stormwater utilities are an idea that have been getting much more attention around the state as the US Environmental Protection Agency prepares to issue a much tougher municipal stormwater permit that will require towns to take additional steps to reduce the amount of pollution they discharge to rivers, lakes and wetlands via their storm drains.

As towns anticipate having to increase stormwater costs, many are considering the potential benefits of putting stormwater on an equal footing with water and wastewater, by funding stormwater through a dedicated fee on each property’s amount of pavement and other hardened “impervious surfaces,” instead of continuing to use the property tax. 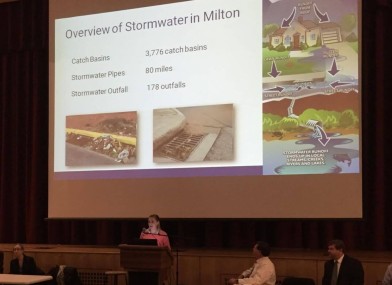 The Milton Board of Selectmen decided in December to put the stormwater utility idea to the voters at their February Special Town Meeting, and turned to NepRWA and the Metropolitan Area Planning Council (MAPC) to provide technical assistance and outreach on the topic. Since then, NepRWA and MAPC have helped the town analyze their data on impervious surface, develop a rate proposal, and present at three public meetings to discuss the idea.

What do YOU think? Is your town doing an adequate job protecting local waterways  from polluted runoff? Is additional revenue needed? If increased costs are unavoidable, would you want your town to consider a stormwater utility or continue relying on the property tax?

Below is some much more detailed background on how a stormwater utility works and what is being proposed in Milton, or download our printable pdf Fact Sheet.

What Is a Stormwater Utility?

Milton is facing new federal requirements to reduce the amount of polluted stormwater runoff it discharges to waterways. This will require the Town to increase its investment in stormwater infrastructure.

While Milton is required to incur these increased costs, it does have choices about how to fund the work.

Fees added to the stormwater enterprise fund could be used only for stormwater, would be consolidated in one account, and would automatically roll over for future use if there was a surplus.

Just as with water and sewer, the stormwater utility budget must be reviewed by the Selectmen and Warrant Committee, and approved by Town Meeting annually.

A stormwater utility encourages property owners to reduce impervious cover. Over time, this reduces pollution, flooding, and the Town’s costs.

What is Polluted Stormwater Runoff?

Developed areas like Milton include many parking lots, buildings, roadways and other hardened “impervious surfaces.” When it rains, water runs off impervious surfaces and picks up pet waste, oil, sand, fertilizers, and other pollutants. It then flows into gutters and storm drains, which discharge it directly into the nearest waterway.

Polluted stormwater runoff is the single largest source of pollution to Milton’s ponds and waterways.

Impervious surfaces are also a major factor in flooding problems. Everyone who owns or uses any impervious surfaces, contributes to the creation of stormwater runoff and everyone depends on Milton’s stormwater system to prevent streets and homes from being flooded.

What Is Stormwater Infrastructure? 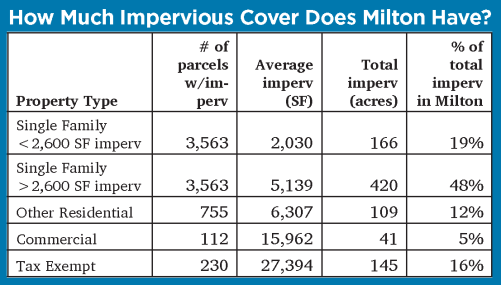 How is Milton’s Infrastructure Maintained?

Milton must actively maintain its stormwater system through tasks such as: street sweeping, storm drain inlet cleaning, inspection and repair of pipes, manholes, and storm drain inlets, upgrading treatment facilities, issuing permits for stormwater discharges on private property, and many other activities.

The costs of stormwater management are spread across many town departments and there is no estimate that covers all these costs. However, many of Milton’s stormwater activities are carried out by the Department of Public Works (DPW) which estimates the cost of its current program is $865,000 per year when debt service on capital projects is included.

How is Milton’s Stormwater Regulated?

Since 2003, the US Environmental Protection Agency (EPA) has issued Milton a permit to discharge storm-water. The 2003 permit has not reduced widespread water pollution problems due to stormwater in MA. As a result, EPA is issuing a new permit with much stricter requirements which will be more expensive.

The DPW estimates it will need an additional $120,000 to comply with the new EPA permit during the first year and they expect these costs to increase further as more requirements take effect in future years

What Does the Town Meeting Article Do?

The DPW would be responsible for administering the program, and the stormwater fee would become an additional line item on the quarterly water/sewer bill.

What Happens If the Article Is Adopted?

There would be a series of steps to create the utility if the proposed article is adopted:

How Much Would Be Raised Via the Fee?

The Selectmen have indicated that they will ask the spring Town Meeting to approve a budget of $705,000 for the first year. This includes $509,000 of existing direct costs, $121,000 of new direct costs for the new permit requirements, and $75,000 of indirect costs. The Selectmen are not planning to include the cost of debt service for existing stormwater capital improvement projects ($281,000/yr). Also excluded are costs in departments other than the DPW.

What Properties Would Be Covered?

The fee would apply to all parcels that have impervious cover except for public roadways. This would include residential and commercial properties as well as nonprofit and tax exempt properties. It would also apply to parcels owned by the state government and town.

Has This Been Done in Other Places?

Stormwater utilities are common across the country, with more than 1,400 in operation. They are less common in MA but at least nine communities have implemented or authorized a utility already including: Reading, Newton, Gloucester, Fall River, Yarmouth, Westfield, Chicopee, Northampton, and Canton.

How Would the Fee Be Calculated?

The basic “rate” for a stormwater fee is calculated by dividing the amount to be raised ($705,000), by the total area of impervious cover in the town excluding public roadways (38,576,071 square feet). This equals 46 cents per 100 square feet of impervious per quarter.

How Would the Fee Be Structured?

The Selectmen are proposing that commercial, government, nonprofit and multi-family residential parcels—about 1,100 parcels in all—be charged based on the number of square feet of impervious cover on each parcel using the basic rate of 46 cents, per quarter per 100 square feet.

The proposed rate structure would be finalized by the Selectmen based on input they collect during required public hearings. The total amount of funding to be raised would be determined by Town Meeting in May. See the tables below for sample fees based on the proposed fee structure and a budget of $705,000.

What do YOU think? Is your town doing an adequate job protecting local waterways from polluted runoff? Is additional revenue needed? If increased costs are unavoidable, would you want your town to consider a stormwater utility or continue relying on the property tax? Add a comment below to let us know what you think!