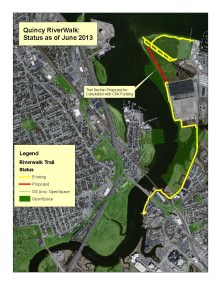 The City of Quincy has authorized the Neponset River Watershed Association to proceed on constructing the final portion of the two mile long northern section of the Quincy Neponset Riverwalk. Once the project is complete, the Riverwalk will run along the Neponset Estuary from the pile-supported gazebo at Adams Inn north to Squantum Point in DCR’s Squantum Point Park. The Watershed Association hopes to have the work completed by next spring, with an official opening in the summer of 2014. The Association this week authorized it’s consultant for the project, Park Planning Associates, to start work.

The City of Quincy is providing $98,000.00 in Community Preservation Act funds for the project, with the Watershed Association putting in $32,000 of its own from the proceeds of a settlement with a developer several years ago. The Association also plans to fund the addition of benches, signage and other amenities along other portions of the Riverwalk before it opens.

There is currently a public waterfront walkway all the way around the Boston Scientific building on Commander Shea Blvd, and this project will connect it to walkways in Squantum Point Park. It will be built along an overgrown, largely buried and impassable taxiway that was built to service the Naval Air Station which occupied Squantum Point from 1923 to 1953. The area is owned by Boston Scientific and the MA Department of Conservation and Recreation.

The currently open portions of the Riverwalk run from the waterfront of Adams Inn, under the 3A highway bridge to Dorchester, across the Neponset Landing property, under the MBTA Red line bridge and out to Commander Shea Boulevard. Commander Shea, which is owned by the Boston Scientific Corporation, has public sidewalks and Boston Scientific has authorized the Watershed Association to add Riverwalk signage and benches. As noted above, a walkway around Boston Scientific was constructed many years ago and includes a natural beach area for launching canoes and kayaks.

The “Conceptual Plan for the Neponset Riverwalk” was published in 2002 by the Neponset River Watershed Association and the Friends of the Neponset Estuary, with assistance from the Quincy Environmental Network. Since that time the Watershed Association has negotiated public easement agreements with private waterfront property owners and the City of Quincy has produced a number of important studies, including the “Preliminary Design Report – Northern Section” in 2007. Quincy City Councilors Kevin Coughlin, Margaret Laforest and Douglas Gutro also helped resolve a number of disputes amongst Quincy residents about some amenities along the Riverwalk.