This spring, NepRWA, and Greater Boston Trout Unlimited launched a new study, called the Embrace-A-Stream Project, to understand the health of the Neponset River’s cold water streams and save our native brook trout. 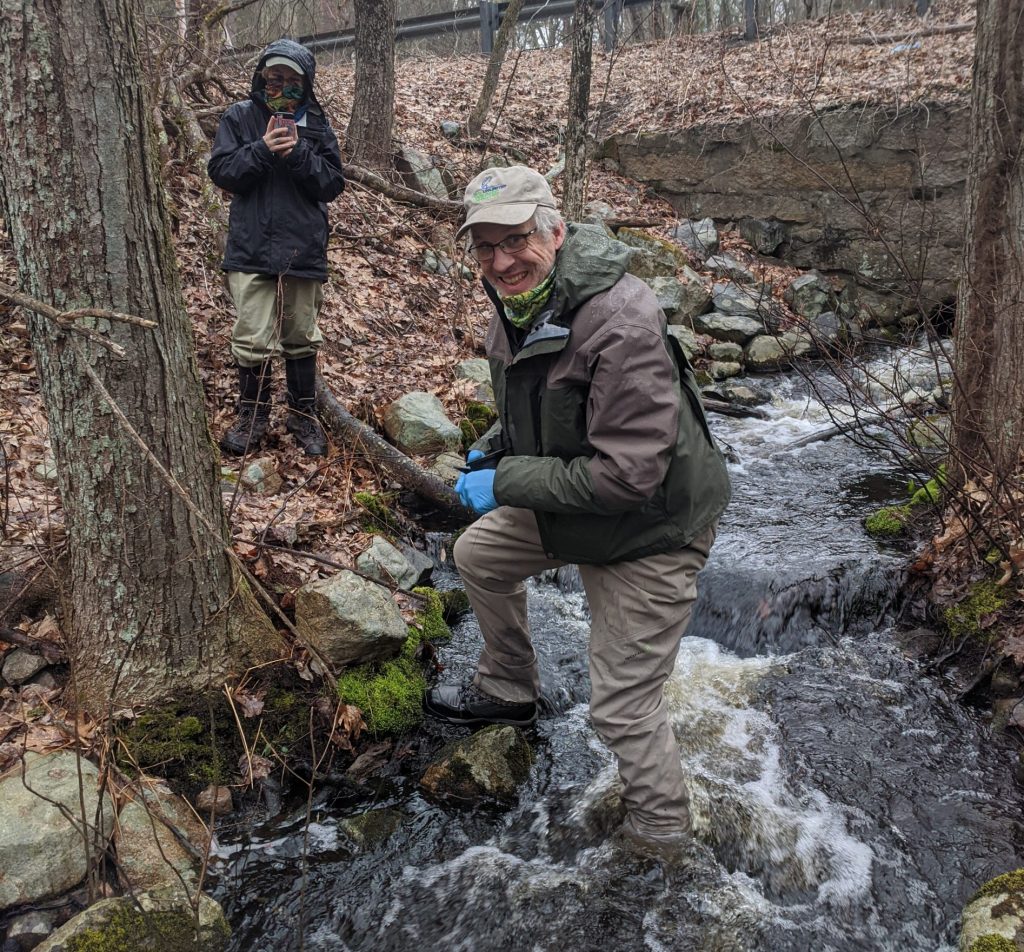 Part of the project had volunteers install temperature loggers (small devices that record the water temperature every 15 mins) at over 30 locations throughout the Neponset Watershed.

Each month, they visited their assigned sites and collected the previous month’s temperature data. This data allows us to assess the temperature fluctuations at every site and give us a broader understanding of the upstream, midstream, and downstream health of each brook.

Why Does the Temperature Matter?

Cold water streams are exactly what they sound like. Streams that have cold water. Specifically, water that stays below 68°F year-round. The wildlife that lives in these streams are specially adapted to these conditions, and when the water gets too hot it kills them.

Some examples of how warm temperatures impact aquatic ecosystems: 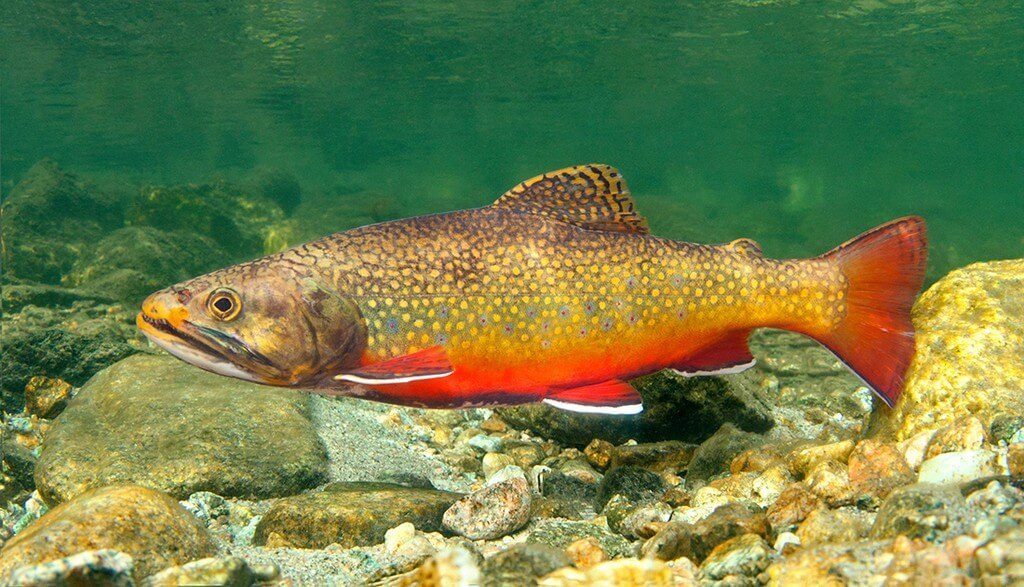 Why is this helpful?

This study allows us to identify which sections are getting too hot and which sections are cold and healthy. If we know the part of the stream that is unhealthy, we can target it and take measures to bring the temperature down and re-establish river health in that portion. Some actions that can be taken to restore colder water temperatures are:

This project has given us a better understanding of the water temperatures in the Neponset River’s various tributaries. Specifically, we have been tracking: 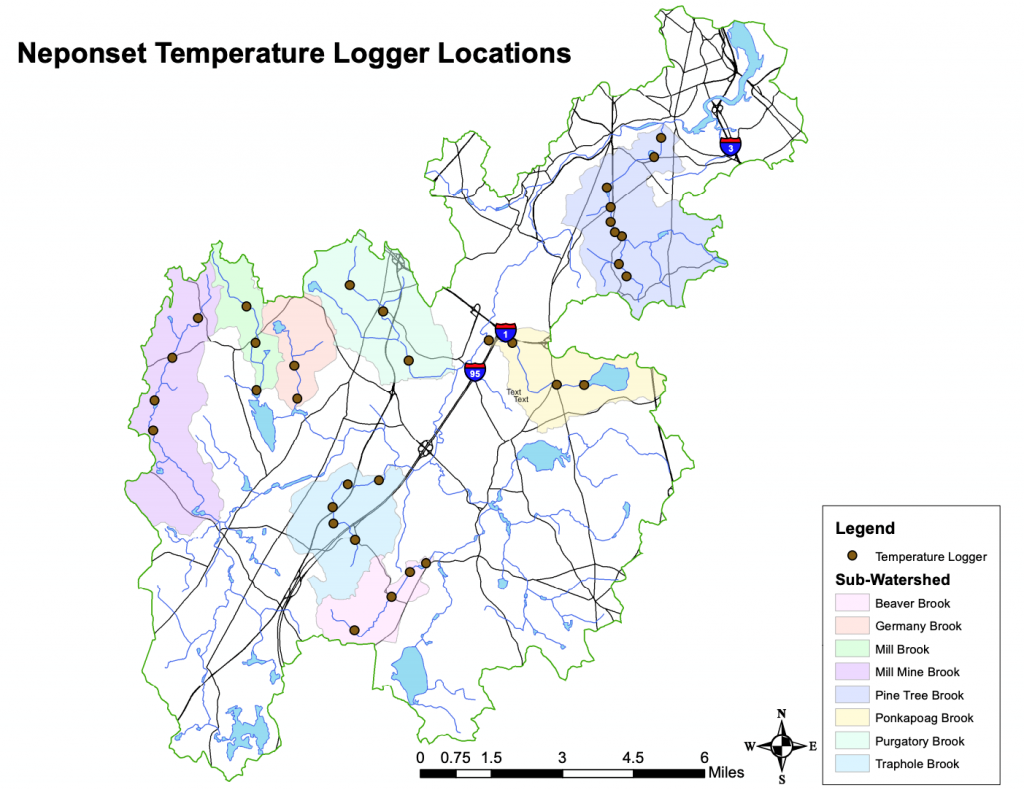 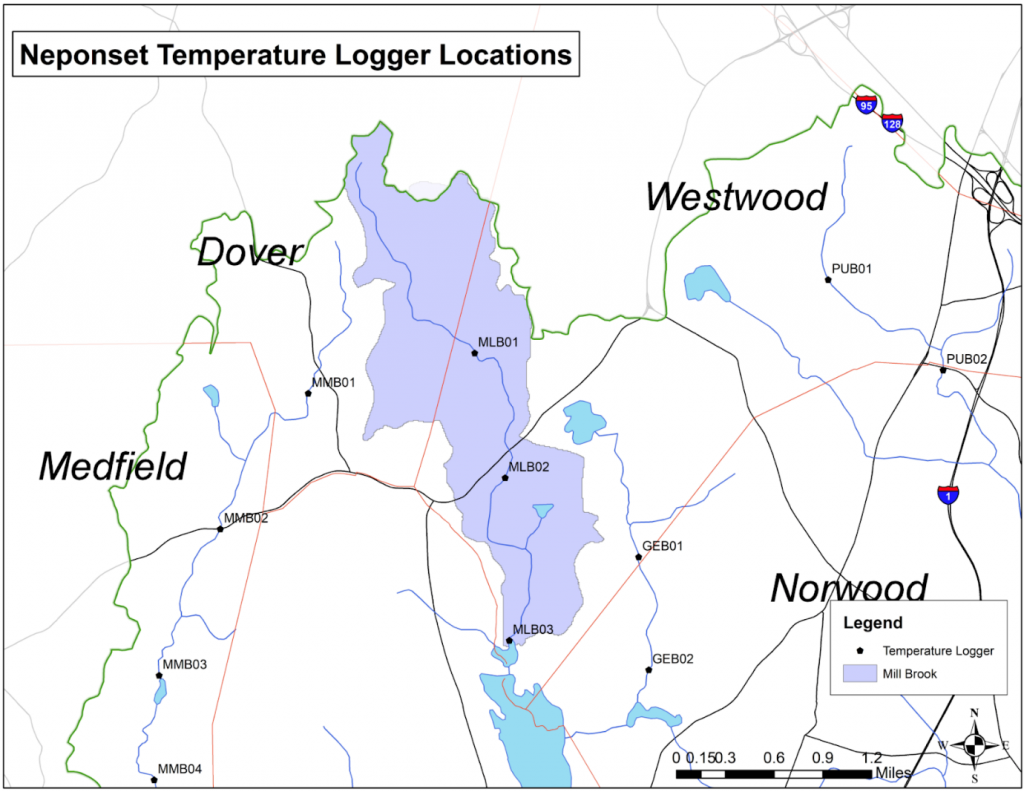 Mill Brook spans 4.88 miles in its entirety, flowing South from Powisset St (Dover, MA) to the Willett Pond’s northernmost point in Westwood. It occupies a basin area of 0.48 miles2, and 6.1% of it is covered by forest while 38.7% is urban developed land. 10.4% is considered wetlands. The USGS has not reported a water use summary about Mill Brook. 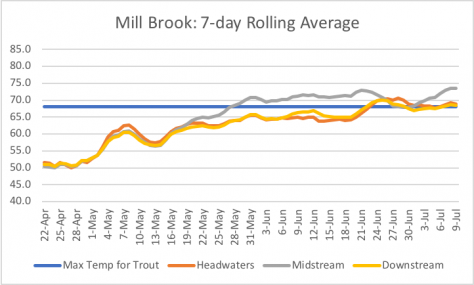 Unfortunately, all three sampling sites of Mill Brook surpassed the 68 °F threshold. The midstream portion of the brook was the hottest: It passed 68ºF by the end of May, while the headwaters and downstream portions of the brook reached 68ºF around June 21st. The highest average of weekly maximum temperatures was 73.57ºF, which occurred on July 8th, 2020. 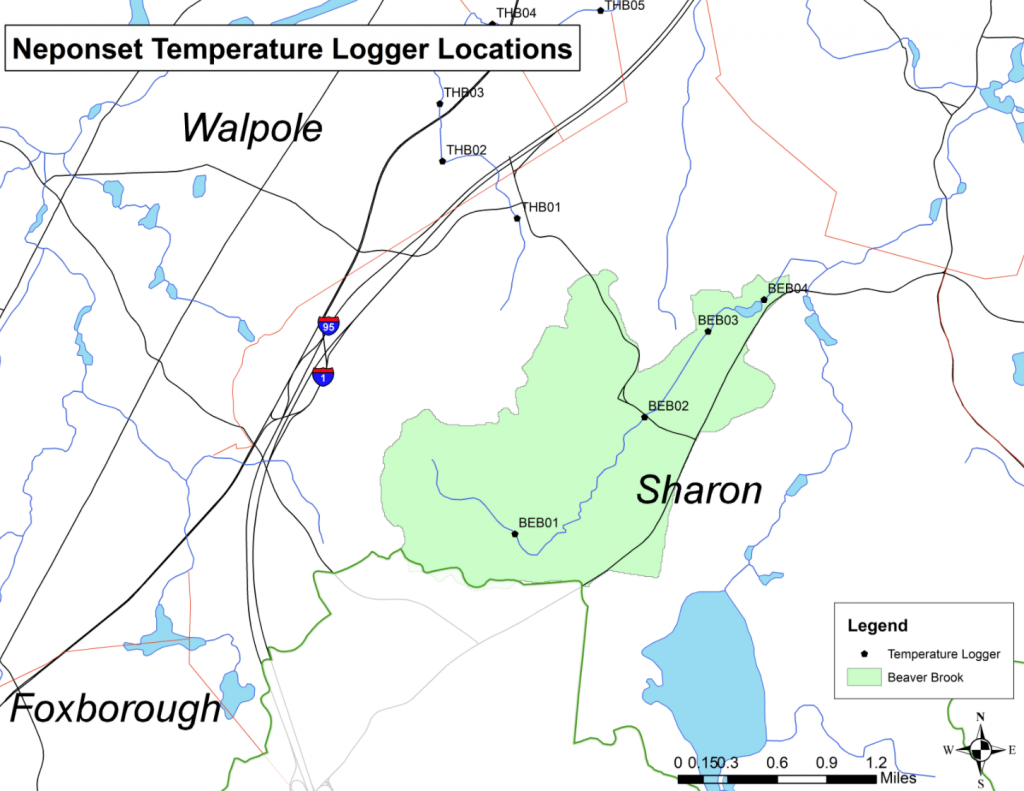 Beaver Brook branches off of Massapoag Brook west in the town of Sharon and flows through Saw Mill pond and into Mass Audubon’s Moose Hill Wildlife Sanctuary. The total length of the brook is just under 6 miles in a 2.43 mile2 area with 64.2% of the land is forested while 25.1% is developed. Furthermore, 12.8% can be classified as wetlands. This brook is used as a freshwater withdrawal source. The height of water usage is during the summer months and the greatest in July with an average of 1.055 million gallons of groundwater removed per day (via USGS stream stat). 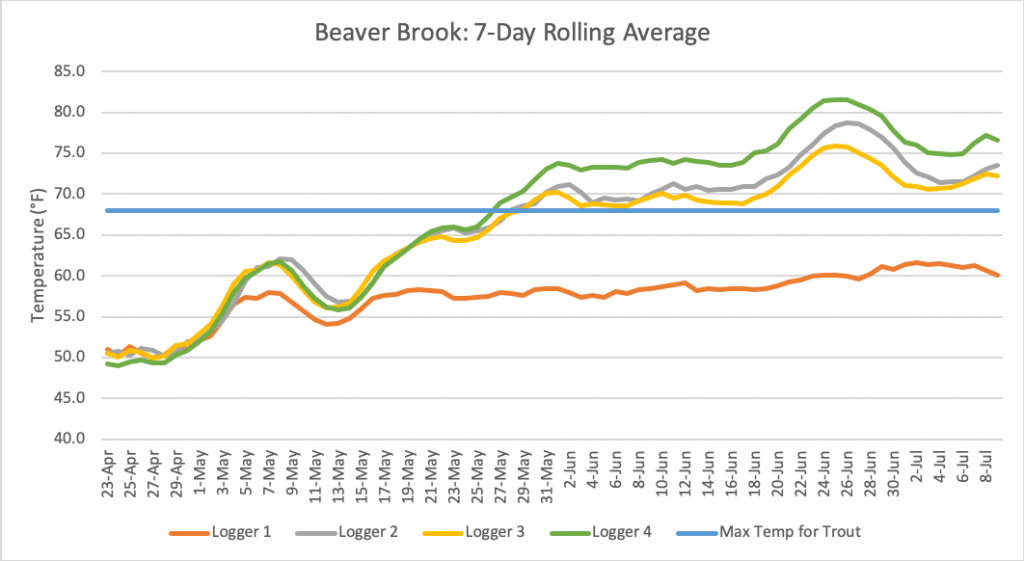 The temperature data for Beaver Brook was taken by four temperature loggers. Logger 1 is the farthest upstream and Logger 4 the farthest downstream. The upstream sections of Beaver Brook stayed cool and averaged below the 68°F threshold while downstream breached and averaged above 68°F after the last week of May. This is likely due to the fact the brook was channelized and cleared of bank vegetation to make way for the commuter rail tracks. The maximum seven day rolling average occurred on July 25th at 81.53°F downstream with temperatures recorded by Logger 4. 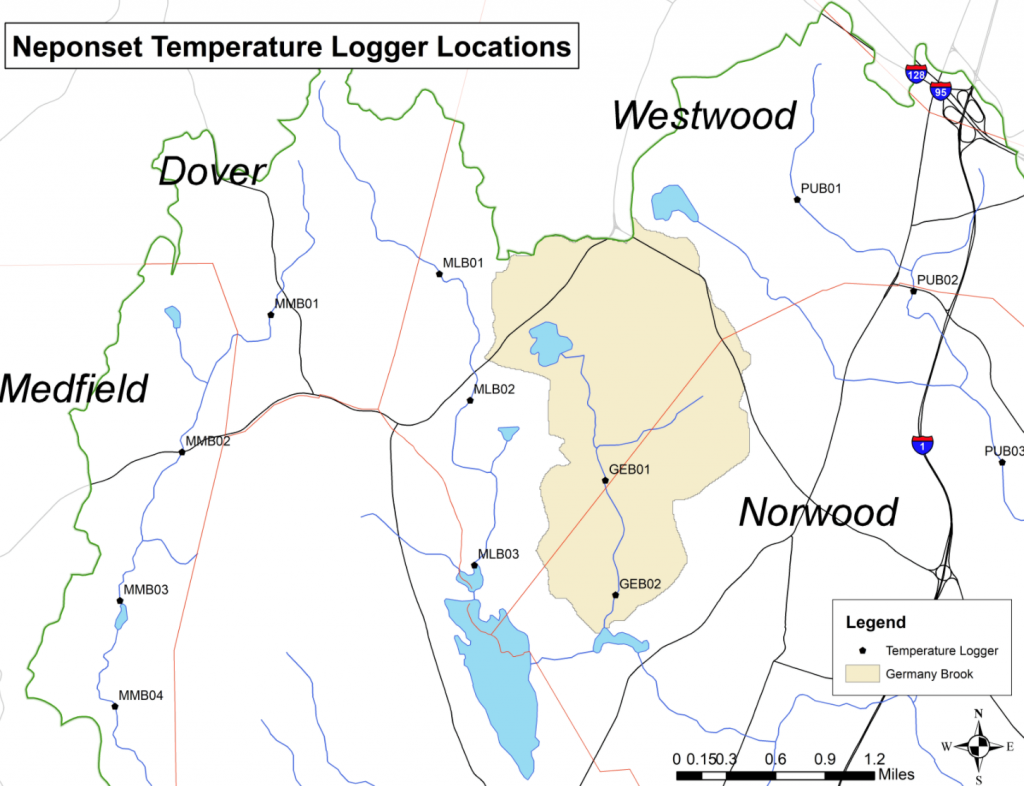 Germany Brook flows from Buckmaster Pond in Westwood south into Ellis pond in Norwood. There are walking paths in Norwood along the brook to Ellis pond. The brook is 4.63 miles long and occupies a basin area of 2.4 miles2. Along the brook, 16.3% is forest and 67.8% is developed land. 9.3% of the land is classified as wetlands. 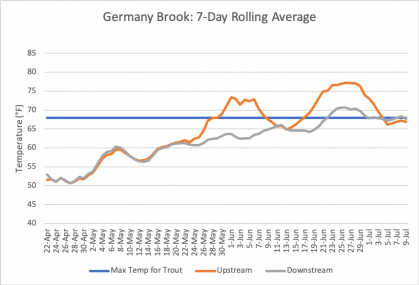 For the majority of the month of May, the temperature of both Upstream and Downstream stayed below 68°F. However, Upstream’s average maximum temperatures reached 68°F or above from May 30th-June 8th and again from June 17th-July 3rd. Downstream Germany Brook stayed cool until June 22 and did not average below 68°F again until July 1st. For the rest of July, the average temperature downstream fluctuated between 67.13°F and 68.32°F. Overall, the maximum rolling average occurred Upstream at 77.19°F on June 26th. 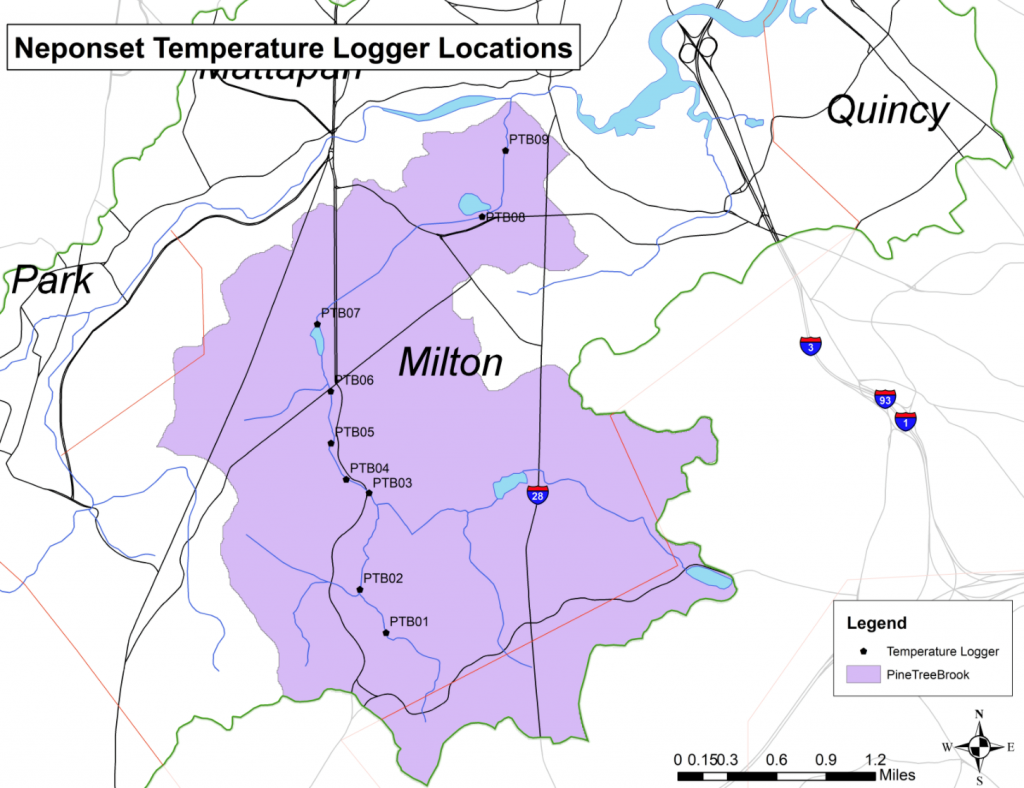 Pine Tree Brook starts in the Blue Hills Reservation in Milton and flows into Popes Pond, Turners Pond, and ends where it intersects with the Neponset River. The brook is just over 13 miles long in a 6.91 miles2 area. 46.7% of the area around Pine Tree Brook is developed land and 50.5% is forested. Of the entire area, 9.0% is estimated to be wetlands. Pine Tree Brook is a source of freshwater where water use withdrawals on average increase in the spring, peak during the summer months, and decrease in the fall. The maximum amount of water withdrawn on average occurs during the month of June at 0.027 million gals/day of surficial water and 0.028 unspecified source at 0.028 million gals/day. 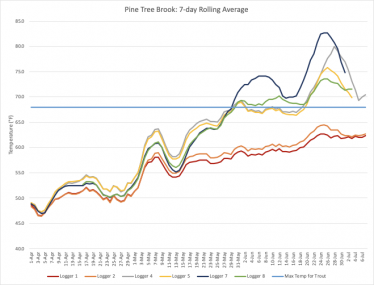 The temperature data for Pine Tree Brook was taken by nine temperature loggers. Logger 1 the farthest upstream and Logger 9 the farthest downstream placed close to the intersection with the Neponset River. However, circumstances like storms and errors occurred resulting in inaccurate data collection from a few of the temperature loggers. The six loggers that had consistent collection are displayed in the graph (Loggers 1,2, 4, 5, 7, and 8). Overall, upstream Pine Tree Brook stayed cool while midstream and downstream averaged above 68°F during the end of May and into June and July. The greatest maximum temperatures averaged on June 25th at 82.64 °F from temperatures recorded by Logger 7. 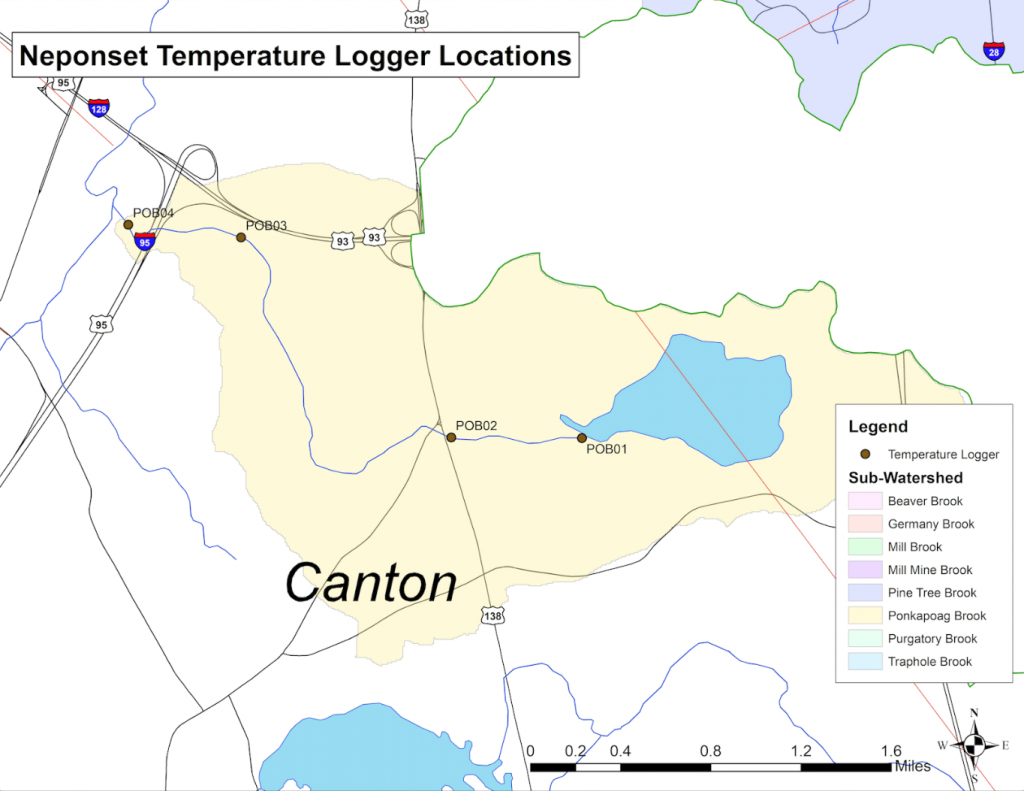 Ponkapoag Brook spans for 6.7 miles, flowing from Ponkapoag Pond in Canton, under I-95 and directly into the Neponset River. It’s watershed occupies an area of approximately 2.39 mi2. 34.6% of the area around Ponkapoag Brook is forested land, while 51.1% is considered developed. Of the entire area, 13.4% is estimated to be wetlands. Ponkapoag Brook is a source of freshwater where water use withdrawals on average increase in the spring, peak during the summer months, and decrease in the fall. The maximum amount of water withdrawn on average occurs during the month of July at 16.8 thousand gals/day of surface water. 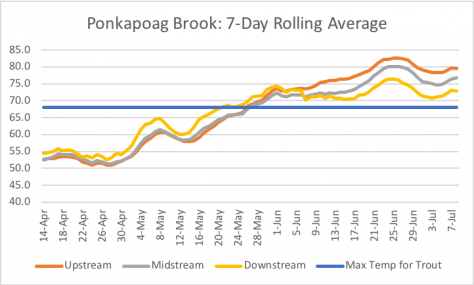 All three testing sites along Ponkapoag Brook surpassed the 68ºF threshold by the end of May. From there, each site fluctuated but the temperatures remained unhealthy throughout the remainder of the data collection period. The graph demonstrates how the water cooled slightly as it flowed downstream. Based on the weekly rolling averages, the hottest water temperature was recorded by the Upstream logger on June 25th, measuring at 82.6ºF. This is the result of hot surface water flowing out of the pond and into the brook at this location. 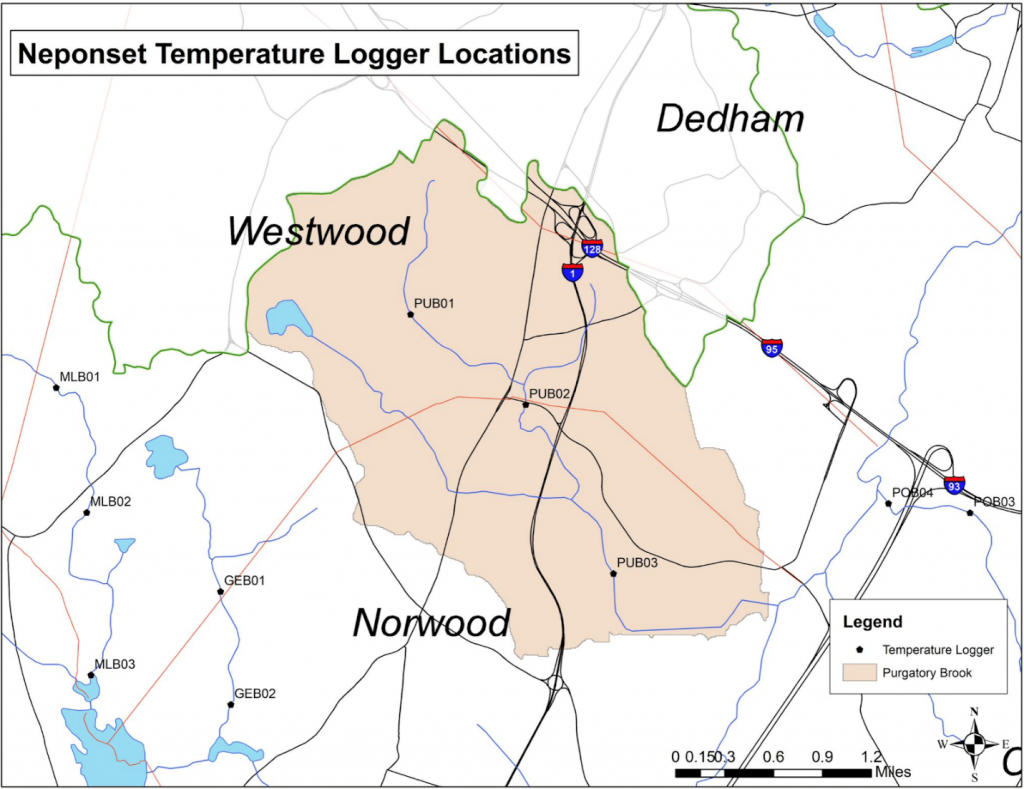 Purgatory Brook spans for 14.4 miles. Its headwaters begin in Mulvehill Conservation in Islington. It merges with Plantingfield Brook near the Ellis Gardens playground in Norwood, and connects with the Neponset River after flowing by the Norwood Memorial Airport. It occupies an area of approximately 2.37 mi2. 27.9% of the area around Ponkapoag Brook is forested land, while 62.0% is considered developed. Of the entire area, 16.4% is estimated to be wetlands. Purgatory Brook is a source of freshwater that helps support the local communities and industries. The maximum amount of water withdrawn on average occurs during the month of July at 3.5 thousand gals/day of surface water. 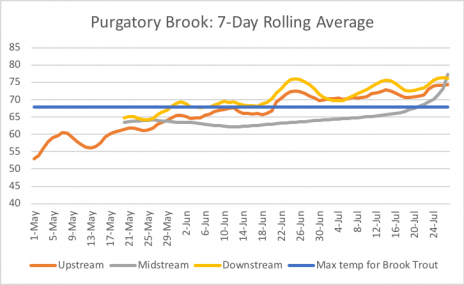 As demonstrated by the graph, water temperatures in all three testing sites of Purgatory Brook steadily increased throughout the 2020 summer months. Although only the upstream data is fully represented here, it is clear that Purgatory Brook’s midstream site was recording consistently lower daily maximum temperatures than the others. Over the course of the testing period, all three sites surpassed the 68ºF ecosystem threshold for brook trout. The upstream site reported temperatures above 68ºF starting on June 22nd, and the midstream on May 30th, while the downstream temperatures did not exceed this level until recording a brook-wide high of 77.3ºF on July 27th. 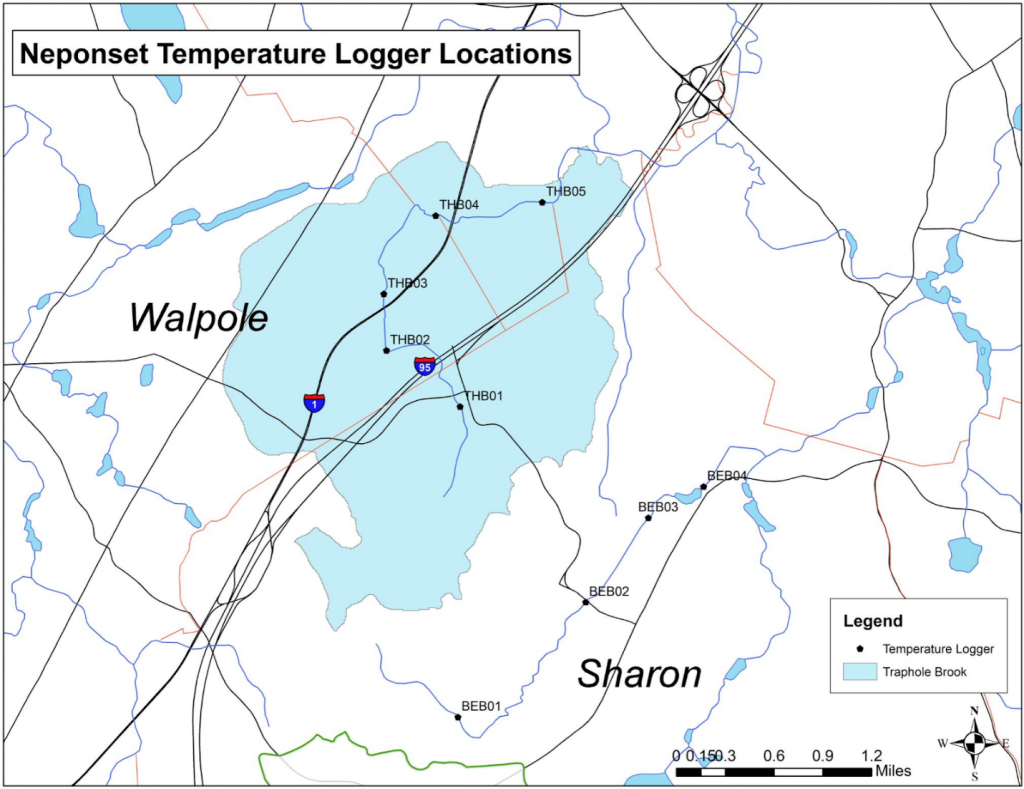 The streams in Traphole Brook combine to flow for 5.88 miles. Traphole’s headwaters begin by the Moose Hill Farm Reservation south of East Walpole. It flows north and connects with the Neponset River near the Neponset Valley Lands and I-95. Traphole Brook is an incredibly healthy tributary to the Neponset. In fact, its brook trout population densities are in the top 10% of the state of Massachusetts. It occupies an area of approximately 1.88mi2. 40.1% of the area around Ponkapoag Brook is forested land, while 53.8% is considered developed. Of the entire area, 7.6% is estimated to be wetlands. There are no municipal water withdrawals in the Traphole Brook aquifer. 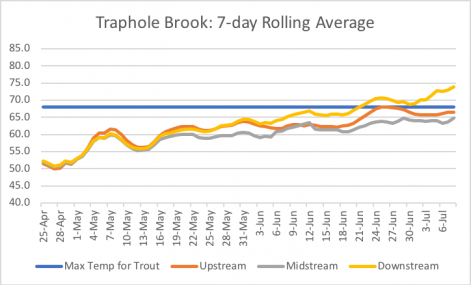 Compared to most of the other brooks, Traphole Brook has remained relatively healthy. Its upstream and midstream points never surpassed the 68ºF threshold, despite coming very close in the third week of June. The temperatures in the downstream section of the Brook passed the temperature cutoff on June 21st and continued to record unhealthy temperatures throughout the remainder of the trial period. The heating issues of the downstream section is likely due to the Mill Pond dam immediately upstream. We are working on removing this dam and hope to have it out of there by Fall 2021. This should help keep the water cool. The brook’s summer-long high was 73.9ºF on July 8th in the downstream section. 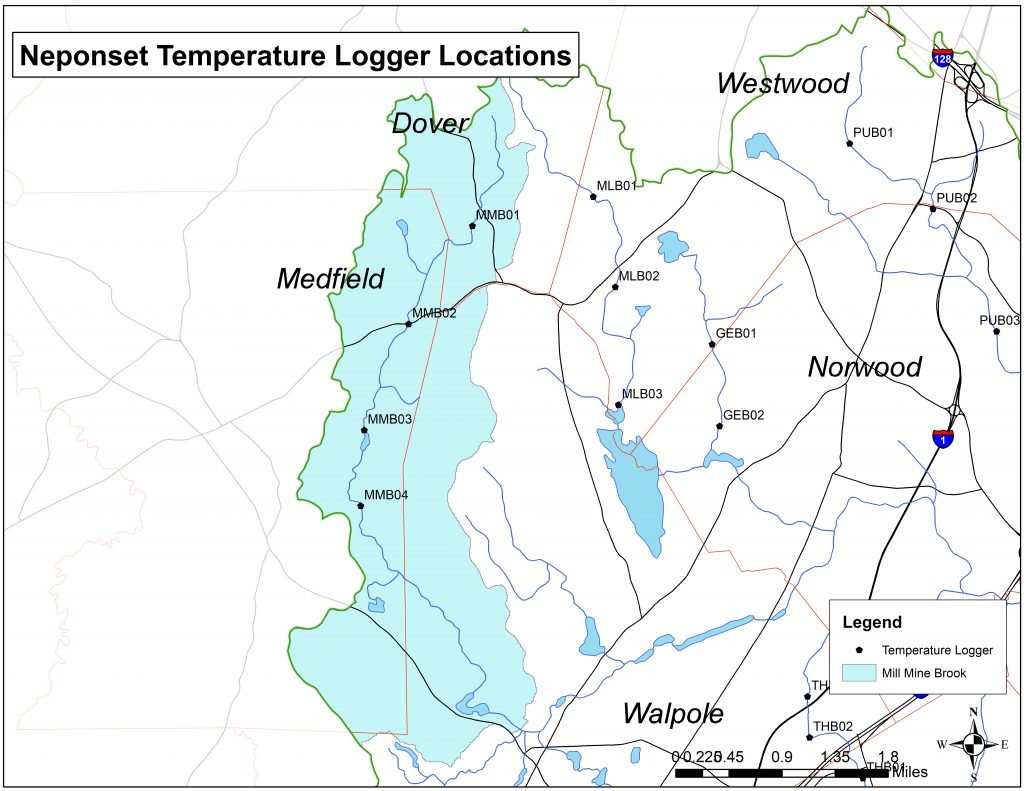 Upstream Mill Mine Brook is used as a freshwater withdrawal source. The height of water usage on average is in July at 0.207 million gallons of water per day. Mill Mine Brook has a watershed area about 7.08 miles2. Its watershed composition is 15.3% wetland or waterbody, 60.8% is forested, and 27.5% developed. Almost 7% of the watershed is impervious cover. The length of brook is 16.6 miles From Rocky Woods Reservation through Turner Pond in Walpole. Recreational areas along Mill Mine Brook include Fork Factory Brook Reservation, Rocky Woods Reservation, and Turner’s Pond which offer walking trails and areas to fish. 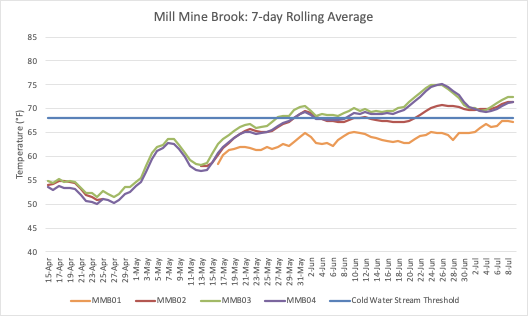 Half of the streams that we measured had sections that were staying cold enough for cold water species to survive. These areas are called refugia, and their persistence is essential for our trout to survive a changing climate.  Upper Tubwreck/Mill/Mine Brook, upper Beaver Brook, upper Pine Tree Brook, and most of Traphole Brook stayed cool enough for cold water species to survive. Not surprisingly the areas that were staying cool were the undeveloped headwaters of each stream, where the influence of groundwater springs is usually the highest. These are areas that we will be prioritizing for conservation and restoration.

Disappointingly it appears that we have lost some of our former coldwater streams to development and or climate change. Ponkapoag brook, lower Pine Tree Brook, and Purgatory brook all were getting much too hot for trout to survive. All hope is not lost however. It is possible that there are localized cold spots near ground water springs that cold water species may go during the summer heat. But they can only get to these spots if there are no barriers (dams and culverts) preventing them from reaching the refugia. The next phase of this study, involves using environmental DNA to uncover where the fish actually are in each of these systems. Hopefully, this will shed some more light on what’s going on in each of these systems, and what are the best actions to take to save our trout.

One response to “Water Temperature Report”