September CWMN bacteria results were markedly lower than August's, due to lower rainfall.

September CWMN bacteria results were markedly lower than August’s, and this is likely attributed to the fact that the watershed did not receive significant rainfall in the 12 days prior to September’s sampling.

The September’s Citizen Water Monitoring Network (CWMN) sampling of the Neponset watershed took place on Wednesday the 2nd. Our volunteers helped to sample from 41 different sites, and the below map illustrates the bacteria results we received. 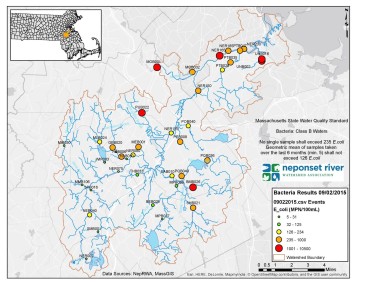 Red and orange dots on this map indicate areas along the watershed that are not safe for swimming by the state’s bacteria standards. Particularly high sites this month include UNB016, UNB014, NER165, MOB001, PUB022, BMB026, which exceeded the “boat-able” limit as well as the “swimmable” standard. 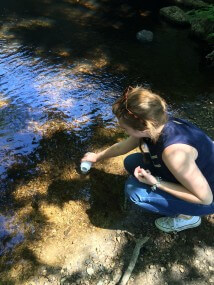 A volunteer sampling at a CWMN site.

Overall, September’s bacteria results were markedly lower than August’s results. This can likely be attributed to the dry weather leading up to the September sampling day. The watershed did not experience significant rainfall in the 12 days prior to sampling, and as a result, this reduced runoff and the amount of bacteria flowing into the watershed.

In the 72 hours before the August sampling, the watershed received 0.26 inches of rain prior to sampling. Rainfall creates runoff from parking lots and other hard surfaces which makes its way into the watershed and results in the higher bacteria counts. Rain before sampling allows pollution on roads, parking lots, and driveways to make its way into streams and rivers which is why we saw higher bacteria levels in August versus September.

Runoff from roads drains directly into the Neponset. This contributes to high bacteria levels.

From the map, you can see that sites close to densely populated areas, such as Boston, have high bacteria levels due to the increased runoff.  It is interesting to note that even during dry sampling conditions, like in the months of July and September this year, these sites tested high for bacteria, suggesting there could be other contributing factors to the bacteria in addition to stormwater runoff.

If you have any questions about the data, or want to become a CWMN Volunteer, please contact Environmental Engineer, Sarah Bounty, at 781-575-0354 x302 or bounty@neponset.org.