Our monthly results from the Citizen's Water Monitoring Network October sampling show improved flow around the watershed as well as lower bacteria levels than previous months.

The map below shows the bacteria data collected from the Citizen’s Water Monitoring Network (CWMN) sampling event that took place on October 30, 2014. From this data we can see that only 8 sites exceeded the state E. coli standard of 235 MPN/100mL. This is less than we have seen in previous months. This is partly because bacteria have a more difficult time surviving in the cold. Therefore, we did not see nearly as much bacteria in our river as we did during the warmer months. The sites in which the state standard was exceeded are represented on the map with the large orange and red dots. Site UNB016 located in Milton at the Unquity Brook was the location of the highest level of bacteria, with 10,500 MPN/100mL. 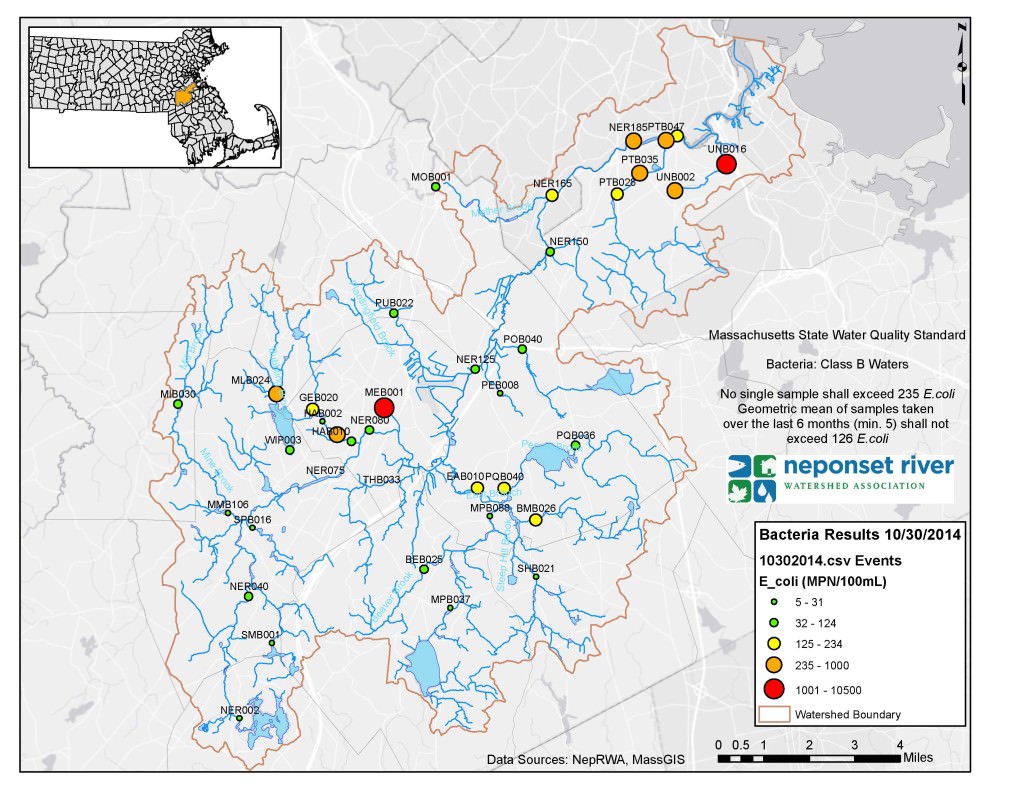 E. coli is a bacteria that is used as an indicator for fecal contamination, which could be coming from leaking septic systems, leaking sewer pipes, polluted runoff, or animal waste.  When levels of E. coli are high there is concern that other pathogens may be present in the water which present a public health risk when a person comes in contact with the water.  Bacteria is one of the most concerning pollutants in the watershed, as high levels have been consistently observed in several locations.

The month of October was a particularly wet one this year.  We had a total of 9.6 inches of rain throughout the whole month. The average rainfall during this time of year is usually 4.8 inches. Many volunteers observed that the water levels were high and that the flow of the river was very fast. This resulted in each volunteer being able to take a water sample at their site, much better than our September sampling date!

Our CWMN program is taking a break for the colder months of the year, but we will sample again starting in May 2015.  You can find historical data here.

If you have any questions about the data, or want to become a CWMN Volunteer, please contact Environmental Engineer Sarah Bounty at 781-575-0354 x302 or bounty@neponset.org. Our CWMN program is successful thanks to the citizen volunteers who take water samples once a month for the warmer six months of the year.  Training and equipment is provided by NepRWA.