The  first water sampling of the watershed for 2015 took place on May 6. Our volunteers helped to collect samples from 41 different sampling sites, and the below map illustrates the bacteria results we received.  Generally, the bacteria levels were low across the watershed compared to results from previous years.  The green and yellow points on the map represent E. coli levels that are considered acceptable by state standards with under 235 MPN/100mL (these units are a way of measuring number of bacteria present in the water). From the map you can see the majority of our sites tested in this range, although five sites did not. 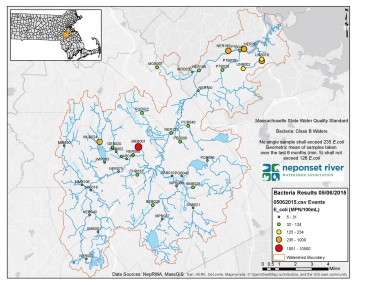 Results from the May 2015 E. coli sampling. Click image to enlarge.

The state water quality standards are set to protect public health.  E. coli is a bacteria that can indicate that there may be viruses or other microbes in the water that could make people sick.  Results above 235 indicate there is enough of a health risk from the bacteria that people should not be swimming.  Results below 235 mean it is safe to use the water for recreational purposes, such as boating and fishing.

Another factor to consider is the significant amount of snow melt the watershed experienced in the months of March and April. This has a “flushing” effect on the Neponset River and its tributaries which not only dilutes the water and therefore lowers the bacteria levels, but also can wash away waste that has been contributing to the E. coli levels. 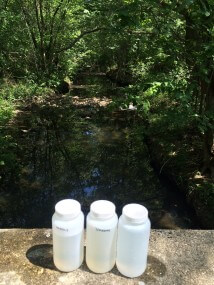 There were five sampling sites with high bacteria results this month, the highest being MEB001. This site is located on Meadow Brook in Norwood and consistently tests very high for bacteria. This is due to leaking sewer drains in close proximity to the brook that have contaminated the water. Another point of interest is MLB024, located on Mill Brook at the inlet of Petee’s Pond. Although this site does not consistently show high results, it was also high during the previous year’s May sampling.  NER185, NER200, and UNB016 also show high levels of bacteria, and this could be a result of their locations with high population densities.

If you have any questions about the data, or want to become a CWMN Volunteer, please contact Environmental Engineer Sarah Bounty at 781-575-0354 x302 or bounty@neponset.org.