The June Citizen Water Monitoring Network (CWMN) sampling event took place on Thursday, June 16. By coincidence, this happened to be the morning after a fire on Hawes Brook resulted in a fish kill involving hundreds of fish, the results of which are discussed later in this post. Our volunteers collaborated to sample 41 different sites within the Neponset Watershed, and the map below illustrates the bacteria results we received. 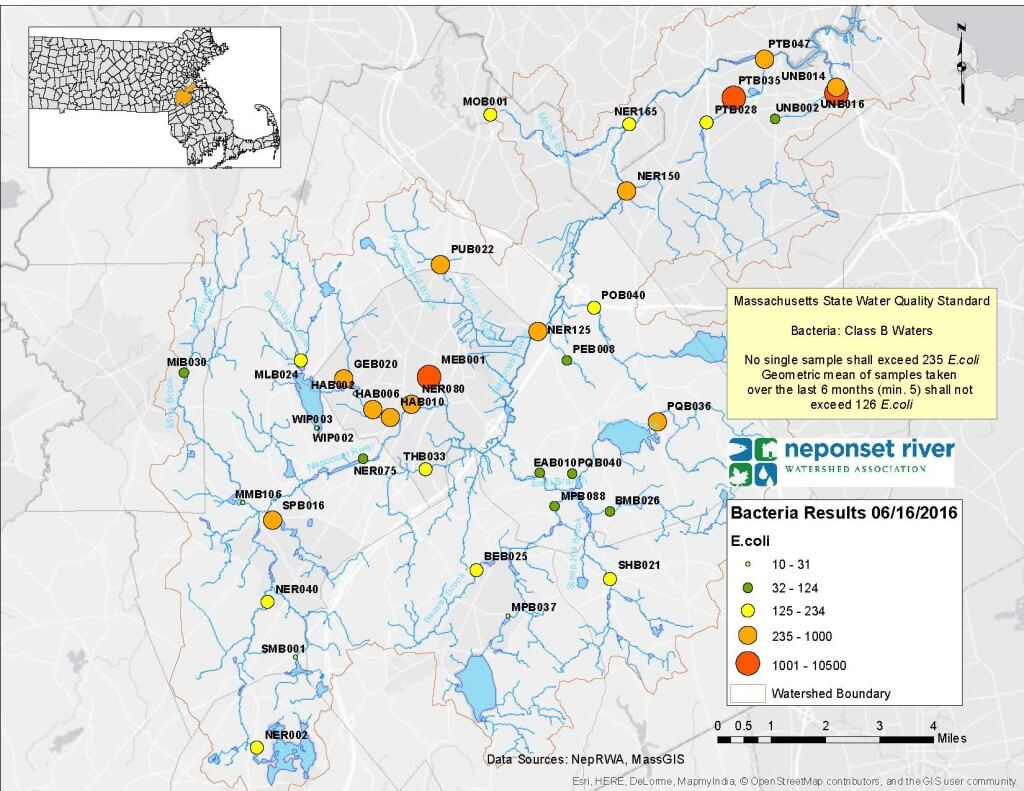 In the 72 hours before this month’s sampling, the watershed received 0 inches of rain prior to sampling, which is referred to as dry sampling conditions.

It is odd that we observed a significant amount of sites exceeding bacteria standards this month since samples we taken during dry sampling conditions. Some sites could potentially be a result of illicit discharges from leaking sewer pipes. We will continue to monitor the situation as the summer progresses and have identified a few areas that we will investigate in the field.

As mentioned earlier, we did observe a few abnormalities in our CWMN data on sites that were affected by the Hawes Brook fire – most notably HAB006, HAB010, and NER080. These sites came back with unusually high bacteria and total phosphorous levels. The bacteria is likely a result of the million gallons of water that inundated Hawes Brook in an effort to put out the fire. This generated runoff which likely swept bacteria into the water. The release of phosphorous is often associated with fire, and therefore we can likely attribute the high total phosphorous levels to this.

Click here to read more about the Hawes Brook fire and fish kill.

Finally, I would like to remind everyone how much we truly appreciate our volunteers. Without our CWMN samples, we may have never known about the devastating environmental impact of the Hawes Brook fire. It is a testament to how important the CWMN program is and it would not be possible without our volunteers!

If you have any questions about the data, or want to become a CWMN Volunteer, please contact Field Sampling Coordinator, Meghan Rauber, at 781-575-0354 x306 or meghan@neponset.org.