On the first Saturday in December, about 30 persons of all ages and sizes assembled at 2 PM in the glassed-in kiosk at Squantum Point Park in Quincy to explore the recently-opened Riverwalk. 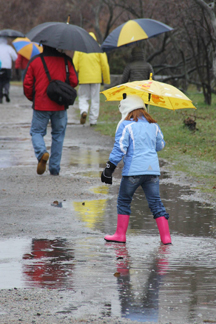 The tour, organized by Sally Owen’s Quincy Environmental Treasures Program, nearly didn’t come off because of downpours earlier in the day, but the radar promised some slackening in the afternoon, and we took advantage.

For years, anyone wanting to walk along the Neponset in Quincy needed bolt cutters, a machete, and perhaps a few search warrants, but now the fences are down and the brush cut away, and the worst obstacle we faced was a large puddle.

The trip was particularly rewarding for me, since I had opened negotiations fifteen years ago with Boston Scientific, owner of the 25-acre former Jordan Marsh warehouse, for public use of their extensive frontage on the river. They agreed to move their fence back from the water, build a stone dust path, and provide a permanent easement for walkers. This was the first step of many.

At the start of the walk, Maggi Brown of DCR, the state park agency, recalled the complicated history of Squantum Point, where Bethlehem Steel built destroyers in World War I, and where the Navy operated an airfield until after World War II. When we stopped at the Point itself, Steve Perdios of the Quincy Environmental Network, recalled that the Riverwalk was originally conceived by Quincy attorney Bryan Stevens, who was interested bringing something positive out of the bruising battles over wetland filling that had plagued the development of Marina Bay. After we started down the old airport access road toward Boston Scientific, landscape architect Pete Jackson, told us something about how walking paths work and what he had done to make this one succeed. 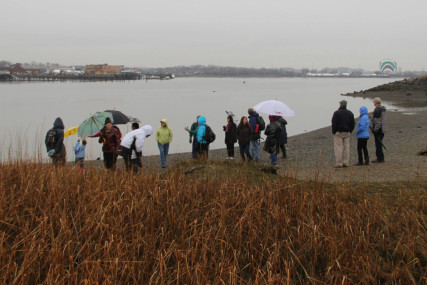 There was nobody fishing at the far corner of Boston Sci, where the riprapped fill ends and the marshes begin. Thanks to the falling tide, we could walk out on the pebbly beach, which is backed by low cliffs of dark peat that are losing their battle with erosion, perhaps due to global warming. Here the path follows the fence back to Shea Boulevard, where a half-dozen parking spaces sometimes fill up in good weather.

We followed Shea Blvd. all the way to the MBTA Red line bridge, then turned off to onto the embankment. It leads to a small stone bench overlooking the spot in the marsh where Debra Davis, one of Whitey Bulger’s many victims, was removed fourteen years ago. The path follows the filled bank under the bridge and into the waterside park abutting the new twelve-story apartment building, Neponset Landing, squeezed between the Red Line and Rt 3A bridges. Here the path occupies a permanent public easement negotiated with builder Conroy Development, by Steve Pearlman of NepRWA. 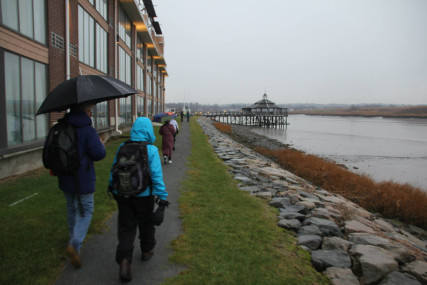 It was raining again and getting dark when reached the wooden gazebo built out into the river at the far side of Adams Inn, which is open to the public from dawn to dusk, and where Quincy Mayor Tom Koch had officially opened the Riverwalk two weeks earlier. Here we counted noses and talked about extending the path upriver past State Street to the Milton line, where it could connect across the Granite Avenue bridge to the Greenway on the Dorchester side. This was not a new idea, but it perhaps seemed a little more do-able now.