This election season, residents of Boston, Norwood and Dedham can shape their community's future for the better by voting to adopt the Community Preservation Act.

The Community Preservation Act or “CPA” is a powerful tool for funding projects to preserve parks, playgrounds, wildlife habitat, and historic properties, as well as creating affordable housing. It works by establishing a small property tax surcharge to fund these specific needs, and drawing state matching funds for every dollar the community invests. 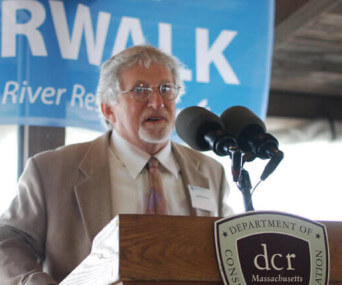 Former NepRWA staffer Steve Pearlman at the opening of the Quincy Riverwalk, funded in part through the CPA

So far, at least 160 communities have adopted the CPA, including many in the Neponset Watershed. We’ve seen the benefits of CPA funding first hand from the construction of portions of the Neponset RiverWalk in Quincy, to the preservation of the mill where Paul Revere rolled the copper that lined the hull of Old Ironsides in Canton, to updating playground equipment and buying land to block an unwanted 40b development in Sharon.

Again and again we’ve seen that choosing to set aside dedicated funding for these important needs opens up tremendous possibilities that benefit the quality of life for everyone in the community, both now and into the future.

Adopting the CPA is a two step process: initial approval by town meeting or city council, and then approval by the voters themselves at the ballot box. We encourage voters in all Neponset towns considering the CPA to vote yes!

On the Ballot in Boston and Norwood

Boston and Norwood residents will see the CPA on on their ballots when they show up to cast their votes in the presidential election on November 8.

The “Yes for a Better Boston Coalition,” of which NepRWA is a member, has mounted an impressive campaign in favor of CPA for the Commonwealth’s largest city. Learn all about the details of the proposal in Boston at www.yesbetterboston.com.

Supporters in Norwood have assembled a great resource with the details of their proposal at www.cpa4norwood.org.

Before Town Meeting in Dedham

Those who attend Town Meeting in Dedham on November 16, will have the chance to take the first step and determine if CPA should be placed on the ballot in Dedham for a future election.