“Team Neponset” managed to meet with seven of our legislators and/or their staff members, giving us bragging rights for most visits by a team in one day (by far). 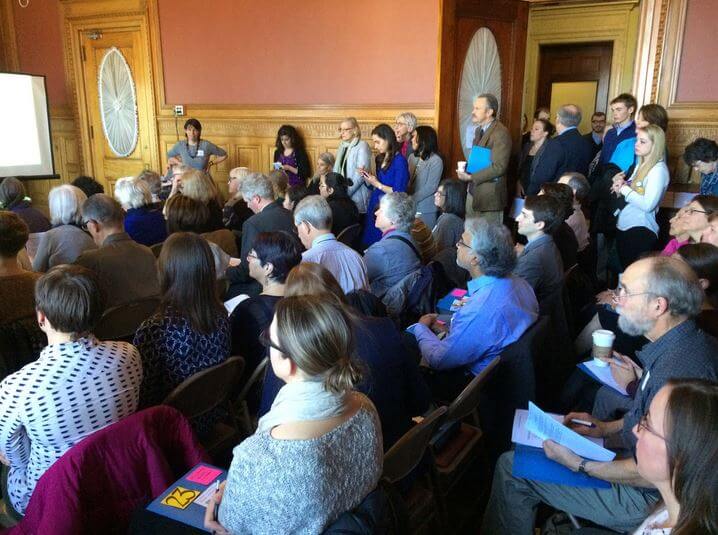 NepRWA’s Executive Director Ian Cooke, along with Board Member Laura Vaites, and Member/Volunteer Diana Satin, made a whirlwind tour of the Statehouse on March 30 during the first Annual #Lobby4Rivers Day sponsored by the Mass Rivers Alliance.

The day brought river advocates from around the Commonwealth into Boston and was a tremendous success. The Rivers Alliance staff had anticipated a total of 25 volunteer lobbyists for the day but ended up with a total of 70 volunteers who managed to meet with 70 legislators in one day.

“Team Neponset” managed to meet with seven of our legislators and/or their staff members, giving us bragging rights for most visits by a team in one day (by far).

We were especially grateful that we got to sit down face to face with:

We also got to meet with legislative staff for:

We found the people we met with in each office to be thoughtful, generous with their time, and very aware of environmental issues in their districts and of the need to protect and improve the Neponset. Most seemed generally supportive of the legislative priorities we came to discuss, and some had already formally co-sponsored one or more of the bills.

Neither Laura, nor Diana, had ever been to the Statehouse nor met with a legislator. Laura commented that “it was a very positive experience to get to meet face to face with our legislators. I was impressed by how knowledgeable they were and I was excited by the level of enthusiasm they showed toward issues of conservation and water quality.”

Diana added, “as someone who has written to my legislators before on a variety of issues, I really had no idea what to expect. It was great to get to actually meet some of them and get a first-hand feel for them as real people. It felt like a very worthwhile use of time, and I would definitely recommend it for anyone who has never done something like this.”

A big thank you to everyone who took the time to meet with us. However, we didn’t manage to meet with all the legislators in the “Neponset Watershed delegation” so we will be following up with others in the weeks ahead.

The main bills and issues we were asking our legislators to support (or oppose) included:

We also asked the legislators to support the funding levels recommended by the ELM Green Budget Coalition, particularly as they apply to MassDEP Administration (2200-01000, the Division of Ecological Restoration (2300-0101), DCR Watershed Management (2800-0101), and DCR State Parks (2810-0100).

One response to “Success on #Lobby4Rivers Day”