De-icing solutions containing salt are added to the roadways to allow for safer driving conditions in the winter. Much of this salt ends up in our waterways as the snow and ice begin to melt.

On February 16, 2016, there was a brief but intense rain storm. This came after unusually warm weather, which had begun to melt much of the snow accumulation. Melting snow, plus stormwater runoff, travels from roads and other impervious surfaces into catch basins, through pipes, and finally exits outfall pipes and drains, where it empties into the watershed.

Map of the sampling sites in Canton, indicated by the red circles. On the left is Washington St, a relatively busy road. On the right is Harrison Rd, which is much quieter.

In order to see how the salinity of the water was affected by this rain storm, water samples were taken at two locations in Canton.

Samples were taken of the road runoff, in the catch basin, and exiting the outfall pipe. They were taken over the period of the storm as well, to see how the salinity changed over time. The first site was on Harrison Road, a quieter neighbor with a dead-end, where the stormwater from the road drains into Ponkapoag Pond.

The second site was on Washington Street, right before a busy intersection, and experiences heavy traffic. The water from this site drains into Ponkapoag Brook. 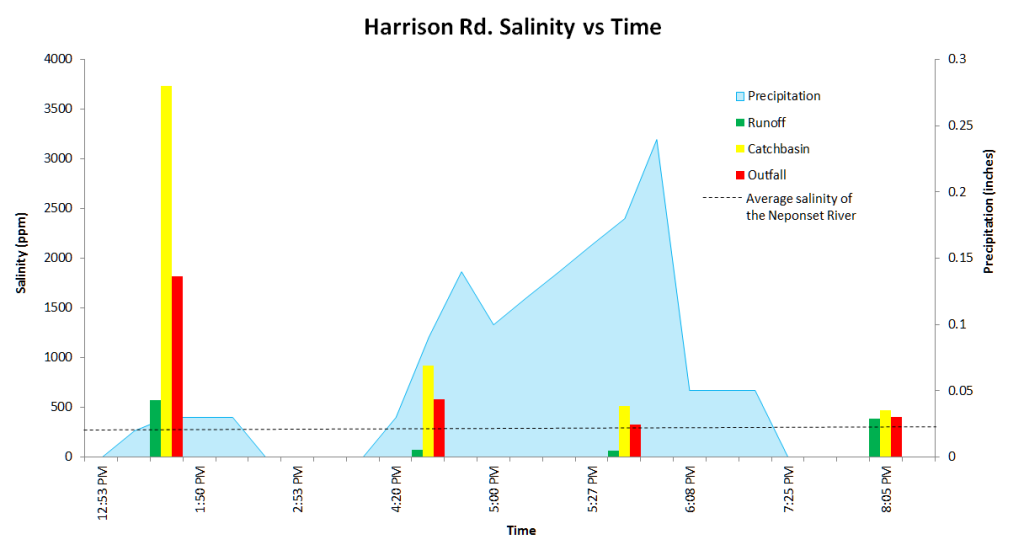 Graph of salinity and precipitation over time for the Harrison Rd. sampling site.

Looking at the above graph for the Harrison Road site, it is clear that the salinity is highest before the storm actually begins. There was very light rain and a significant amount of snow melt during this time. The catch basin tested especially high, and this is likely due to the fact that the snow melt had begun to accumulate in this catch basin or that when the road was salted, salt fell directly into the catch basin.

The black dotted horizontal line on the graph indicates the average salinity of the Neponset River, which is about 260 parts per million. The catch basin exceeded this level during all time intervals. Before the storm, the runoff and outfall also tested significantly high.

At the beginning of a storm, known as the “first flush”, the storm water has the effect of clearing away things that have been accumulating on the ground, and flushing them into the waterways. As the graph indicates, this is consistent with our salinity findings, as the levels drop dramatically once the rain begins. Interesting to note too, is how the outfall salinity levels are always higher than the runoff. This is possibly a result of the accumulating salt in the catch basin being swept out the outfall. 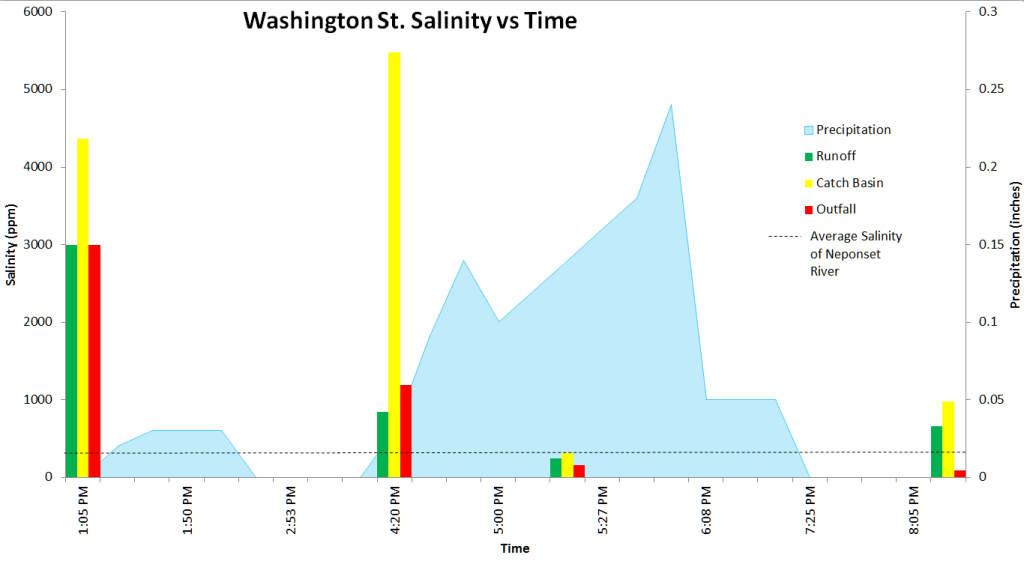 Graph of salinity and precipitation over time for the Washington St. sampling site.

Compared to the Harrison Road site, the Washington Street site experienced much higher salinity levels. This is likely the result of Washington Street being a much busier road and therefore may be salted more frequently. In addition, there was a major salinity spike in the catch basin during the “first flush” sampling interval. Once again, the middle of the storm saw a dip in salinity as the storm water flushed the salt further down the river.

A diagram showing dense, saline-rich water sinking to bottom of a lake.

Road salt can effect the health of the watershed by disrupting the way that aquatic plants and animals can regulate their body fluids.

Salinity-rich waters are also more dense and tend to sink to the bottom of water bodies. This can be especially problematic in ponds, lakes, and estuaries because it impedes water mixing, which is essential to nutrient cycling and maintaining proper dissolved oxygen levels, especially at the bottom water layers. Aquatic plants and animals struggle to survive in oxygen-depleted water.

2 responses to “Stormwater Effects on Watershed Salinity in Canton”