Best wishes go to our Advocacy Director, Steve Pearlman, who will be retiring in mid-June. Steve and his dog, Brady, are a hard act to follow, and will be missed for sure! 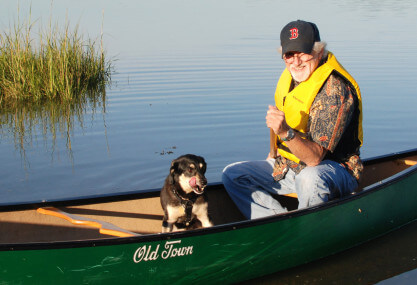 Steve and Brady on a NepRWA outing.

It was 11 years ago that I took early retirement from the Department of Environmental Protection (yes, there were financial incentives) and joined the staff of the Neponset River Watershed Association. It was a good move for me, for sure. I’ve enjoyed my time here more than on any job I’ve had. Now I turn 68 in June, and I will go from working part time at NepRWA to not working at all. I’ll miss it and I won’t miss it. What I’ll miss most are the wonderful people I work with here. I might just have to drop by for lunch every now and again.

I have to admit, though, that I’ve been looking forward to retirement since kindergarten. As the bard said, “twenty years of schooling and they put you on the day shift.” I’ve been on the day shift a long time now. I’ve spend virtually all my adult life working for government and non-profits on environmental protection. Rewarding and worthwhile work, but discouraging to see the gigantic financial cuts made over many many years. First at the federal level 35 years ago — thanks a lot, Ronnie — and then at the state level 25 years ago — thanks, Gov. Wealth for getting the ball rolling.

All of it due to politics and short-sightedness disguised as government “financial” crises. Simply because Democrats and Republicans alike dare not mention the “T” word. The government gives tax incentives for private investment, while public investment is deemed wasteful. Well you don’t get something for nothing. When I was with DEP, they told us to think, “more with less.” Now it’s just less with less and less and less.

Even NepRWA’s once considerable government funding has mostly dried up, though thankfully Ian and others have managed to cobble together a number of alternative funding sources. It’s wonderful that we now gets paid by some of our municipalities to help them with things like water conservation and stormwater. I’ve seen NepRWA go from a mostly adversarial relationship with our towns to a real partnership. It was a smart move and a productive one.

Now NepRWA and the whole environmental movement in Massachusetts will have to fend for themselves as I ride off into the sunset in my Mazda Miata convertible. I’d like to thank everyone who has been fighting the good fight, but at 67 + I can’t remember your names. Bye.

One response to “Steve Pearlman Bids Us Farewell”