With little fanfare, the construction fences came down this past weekend, and the long awaited connection between Central Avenue and Mattapan Square was complete!

The long awaited “missing link” in the Neponset Greenway Trail is finally finished! The trail is currently having a “soft” opening with the official ribbon cutting and publicity still to come. 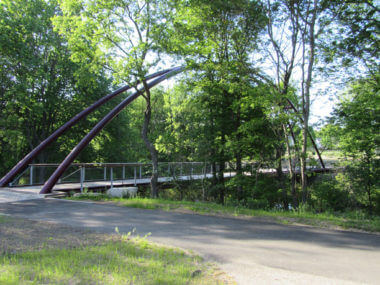 The new section of trail runs upstream along the Milton Side of the River from Central Avenue, before crossing to the Mattapan side of the river, via the dramatic new Harvest River Pedestrian Bridge at Ryan Playground. The trail then continues upstream on the Boston side of the River toward Mattapan Square along the Canopy Bridge, a raised pathway that carries pedestrians and cyclists safely over the train racks.

The new route will provide easy access to a beautiful section of the river that has traditionally been very difficult to access. Furthermore, by opening up a continuous route from Hyde Park all the way to the mouth of the river, it completes the next major phase in the long term vision for a trail that will serve all the communities along the river. 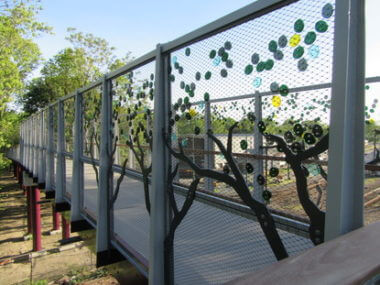 Guided Bike Tour on May 27

For a guided bike tour of the entire route from Paul’s Bridge in Milton to Castle Island, join local advocates Jessica Mink and Lee Toma on Saturday, May 27 at 10:00 am at Paul’s Bridge (Neponset Valley Parkway, Milton MA).

Jessica and Lee are core members of the Neponset Greenway Council, a citizen committee that has been advocating for the trail for many years now.

See more photos of the trail at the MassPaths Neponset Greenway page.