Room to Roam for Our Native Brook Trout

Removing dams along Pine Tree Brook and the Neponset River will help to restore fish migrations that have been lost for hundreds of years. 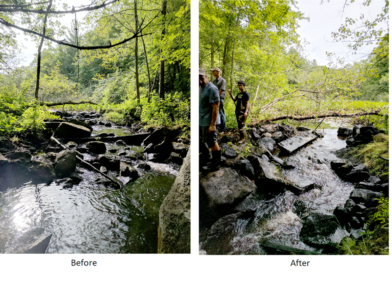 A team of volunteers, staff from DCR, and NepRWA staff members removed and rearranged boulders in the breached Harlings Mill Dam to restore fish passage in Pine Tree Brook. This was the first stage in a larger three stage restoration of the stream corridor between Harland St. and Canton Ave. in Milton. Brook trout can now travel freely between Canton Ave. and the headwaters of the brook near Hillside Street.

Removing the dam at Harlings Mill gives trout access to a large swath of high quality foraging habitat and now allows them to travel back upstream in the fall to the cold headwaters where they like to spawn. These efforts will go a long way in protecting and bolstering the trout populations in Pine Tree Brook, and should ensure that they will remain for generations to come.

A huge thank you to all of the volunteers, and the folks at DCR that made this project possible. We are looking forward to the next steps in the project. 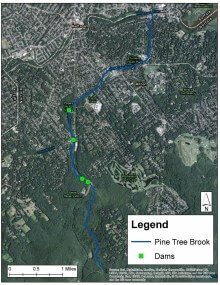 Pine Tree Brook winds its way down from the Blue Hills, through Pope’s Pond, past (but not through) Turner’s Pond and finally into the Neponset River, just downstream of the Central Ave Bridge in Milton. Along the way there are a total of four dams preventing fish and other aquatic animals from traveling to and from the Neponset.

One of the projects we’ve been working on for the past couple years aims to remove the three most upstream dams in order to reconnect the headwaters into a continuous habitat all the way down to Pope’s Pond.

Eventually, if passage were also restored at Popes Pond and Baker Dam in Lower Mills, it would reconnect the Blue Hills to the ocean restoring smelt, herring, and shad migrations that have been blocked for hundreds of years.

The three headwaters dams we are working on now are all very small, and the restoration work will be accomplished using only people power, which means we need your help.

If you’re interested in participating in this project, which will take place next summer, please contact Environmental Scientist, Chris Hirsch, at hirsch@neponset.org to get added to the list of volunteers and get regular project updates.

During times of drought, like the extreme one we suffered through this past summer, the headwaters of streams and rivers, where trout breed, tend to be the first to dry up. As this happens, the fish seek refuge downstream where they often have to cross over dams in order to find enough water to wait out the drought. And while it’s often possible for a fish to pass over a dam heading downstream, it’s often impossible for them to get back over the dam from its bottom.

In natural streams, when water levels recover after a drought, fish are able to return to the headwaters and repopulate the area. When rivers are dammed, fish can’t get back upstream and headwaters can be left barren unless they are artificially stocked by people. A healthy river is one that is self-sustaining and resilient against stressors like drought. Removing dams allows streams to heal themselves naturally and moves us closer to our goal of healthy streams and rivers.

The uppermost portion of Pine Tree Brook is home to one of the only breeding populations of native brook trout in the entire watershed. Removing the three headwater dams will double the available trout habitat, increase access to prey, and increase access to drought refuge locations. Removal will also allow trout that ventured downstream during the summer in search of food and shelter to return to the headwaters in the fall to spawn. All of these benefits greatly increase the strength and resiliency of this rare population of brook trout and help guarantee they will remain there long into the future.

The Pine Tree Brook Stream Continuity Project is on pace to have fish passage restored through two of the three dams by the end of June next year. All of the permit applications have been or are about to be submitted, and we are currently coordinating with the Mass Historic Commission, DCR, and the Milton Conservation Commission to ensure the project meets all regulatory standards.

The middle dam, called Harling’s Mill Dam was built in the 1700’s by Thomas Harling, and was used to power his saw mill. The long-abandoned dam, breached during the severe floods of the 1950s. Because of the historic nature of the site we want to ensure that we accomplish our goals while still preserving as much of the site as possible. We won’t be altering any of the intact parts of the dam, but instead we will be moving rocks that were dumped into the breach at some point in a half-hearted attempt to repair the dam. Removing the rocks will create a channel that is fish passable under low flow conditions.

We are currently looking for funds to hire an archaeologist to document the site before, during, and after our alterations so that we can better understand the cultural significance of the site. This is the last major hurdle we must overcome before we can complete the first phase of the project. 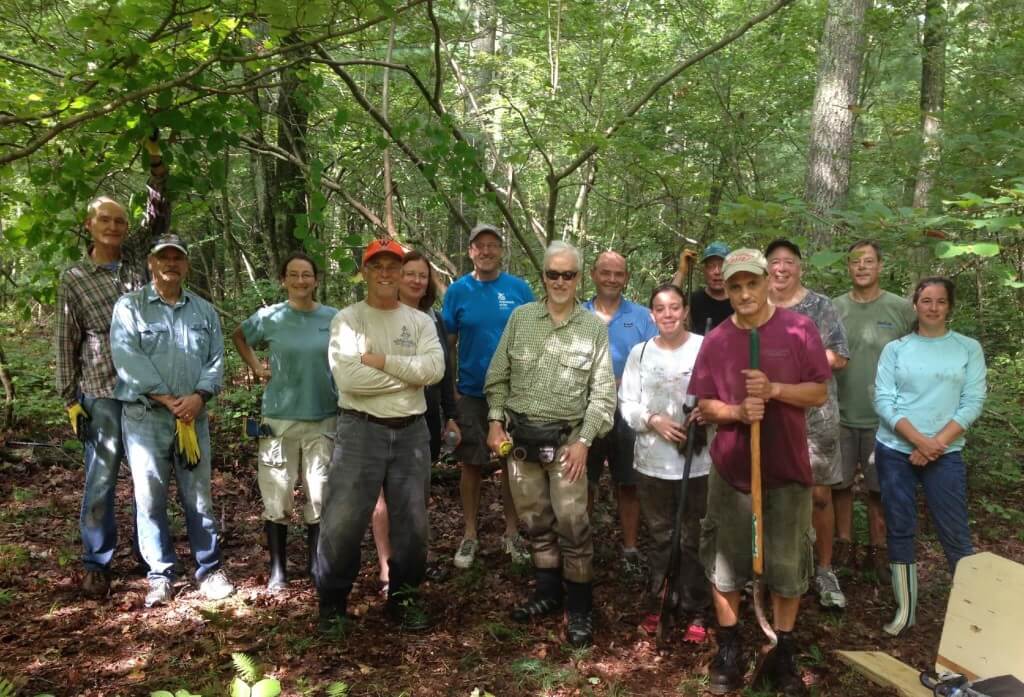 We’re thankful for the volunteers who worked on the Traphole Brook Dam Removal Project!

3 responses to “Room to Roam for Our Native Brook Trout”