Rollin’ on the River 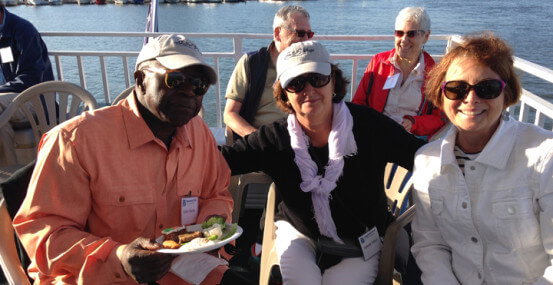 The morning of August 9th dawned dismal and rainy, and did not look like good boating weather for NepRWA’s planned sunset cruise along the Neponset River Estuary and Dorchester Bay. However, as the day progressed, the clouds disappeared and the sun came out – and the weather became much more agreeable.

Captain Mike of the Boston Belle greeted our 57 guests as they boarded the boat in Marina Bay and went to the open upper deck to find seats.  NepRWA Executive Director, Ian Cooke, welcomed everyone and remarked about our good luck with the lovely weather. As we sailed through the estuary, he gave a vivid description of the area, pointing out assorted landmarks, and describing the various plants and wildlife.

About an hour into the cruise, Bob Chen, Director of the School for the Environment at UMass/Boston, discussed how his students were using the Neponset River as a laboratory for studying carbon cycling in rivers.

According to Bob, as plants are pulling carbon out of the air, some amount of it gets released back to the water in the watershed, and accounts for the naturally “tea” colored water in the river. This happens across the watershed, but one of the most active areas is in the Neponset saltmarshes.

You can learn more about Bob Chen’s research at UMass/Boston by clicking here.

After the talk, Bob mingled with the crowd to answer questions, while guests enjoyed an array of delicious food and cocktails, the beautiful view, and the company of new friends.  As our two hour tour came to an end, the summer sun was low on the horizon, and it was apparent that a great time was had by all.

We’d like to thank all who attended the Neponset Estuary Cruise!  Special thanks also goes to our sponsors, Venezia Restaurant and Roche Bros.