Can six towns and one watershed association upgrade 720 bathrooms and 360 laundry rooms in just four months in a bid to save 157 million gallons of water?

The towns of Canton, Foxborough, Sharon, Stoughton, and the Dedham-Westwood Water District have come together with the Neponset River Watershed Association to pilot a regional water conservation program that will serve more than 50,000 households. Our goal is to save 157 million gallons water between now and June 30, 2014!

Inexpensive faucet aerators, combined with good water use habits like those demonstrated here, can dramatically lower household water use.

The water conservation collaborative is promoting rebates on water saving toilets and washing machines, as well as distributing efficient showerheads and faucet aerators to local residents. As part of the effort, the Association will be organizing a major outreach push to promote the program in the participating towns through educational mailings, bill stuffers, local advertising, posters at retail outlets, public service announcements and other means.

Residents interested in saving water, lowering their water bill, and helping protect the health of the Neponset River and its tributaries should contact their local water department for further details over the next few weeks, and keep a lookout for campaign information which will start appearing over the next several weeks.

The project is being funded by a grant from the Mass Department of Environmental Protection, which will underwrite half the cost for the rebates and 100% of the outreach costs, with each participating community providing a match for the rebate costs. The Town of Sharon is serving as fiscal agent on behalf of the collaborative.

The Neponset Watershed Association organized the project, wrote the grant, and will administer much of the work on behalf of the communities. The project is strictly time limited and only runs to the end of the state’s fiscal year on June 30, 2014. It required significant groundwork by the Association to bring the communities together, get everyone on the same page, and write the grant. This critical preparatory work was made possible by donations from the Association’s individual and corporate members.

“We’ve set a real challenge for ourselves to retrofit 720 bathrooms and 320 laundry rooms in just four months,” said Nancy Fyler, Water Conservation Coordinator for the Watershed Association, “but with all the towns working together, we are confident we can get the job done in time.”

Excessive water withdrawals impact water levels in the river, with adverse effects on fish, wildlife, recreation and water quality. Most areas of the Neponset Watershed are classified as “Ground Water Category 5” by the MassDEP, which is the highest level of impact under the new state classification system. 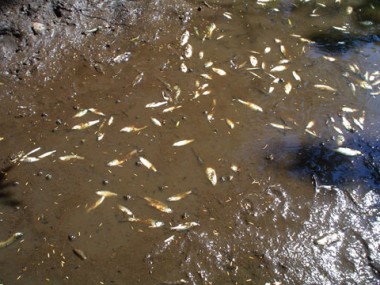 Drought, combined with heavy summer water withdrawals, left this tributary of the Neponset dry, causing a fish kill. While the effects of depleted streamflow are seldom this dramatic, they exert a considerable influence on the health of local wetlands and waterways.

The Watershed Association views aggressive water conservation programs and greater efficiency as one of the most promising strategies to help reduce the amount of water being diverted from the river and restore the health of our streams. The advantage of conservation over other strategies to reduce water withdrawal impacts, is that it saves money, by reducing short term operating costs for water suppliers, and helping communities avoid or postpone expensive capital expenditures for expanding supplies.

Ultimately our goal is to see every water supplier adopt aggressive water conservation programs, and we believe the kind of regional approach embodied in this project is the easiest and most cost effective way for communities to do that.

All eight communities, who get some or all of their drinking water from within the watershed, were asked to participate, and six agreed to join forces, with Medfield and Walpole declining. The Association hopes to see the communities continue the regional effort on their own once grant funds are exhausted, and to see additional communities join in the future.