Reason and the River: From the Industrial Revolution to Dorchester Bay: Connecting the Dots on the Neponset River Trail

From the Industrial Revolution to Dorchester Bay: Connecting the Dots on the Neponset River Trail
Blog #4 By Will Reason

Starting from the Mattapan end, I cycled through a lovely stretch of the winding river, green and shadowy, similar to the Hyde Park section I described in my first blog. Before too long, I reached the Harvest River Bridge, which crosses the river into Milton. The bridge, completed in 2017, consists of two tall narrow arches supporting the path. These striking purple beams slice across the sky and stand dozens of feet above the water below. 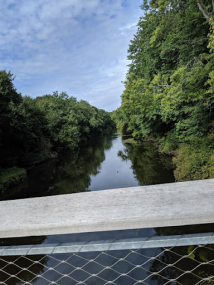 View along the river from the Harvest River Bridge 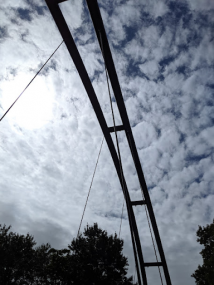 Staring up at the stunning arch of the bridge

Once across into Milton, the trail quickly becomes a monument to the river’s industrial past. It runs past the old Baker Chocolate factory with its towering smokestack. The repurposed factory provided an interesting backdrop to my bike ride and served as a reminder of the river’s more bustling (and more polluted) past. A nearby mural pays tribute to the Indigenous people who once farmed and fished along the river, a testament to its historical links to man.

Leaving behind this industrial stretch, the river opens into a narrow estuary, 6-foot-tall grass marking the boundary of a salt marsh. The path meanders along Dorchester Bay, passing the site of the annual Neponset RiverFest, runs through Pope John Paul Ⅱ Park, and finishes in a long loop through Joseph Finnegan Park. It is worth exploring the various splits and extensions the path takes through these last couple of green spaces. They each provide unique views of the estuary. 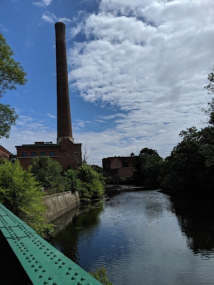 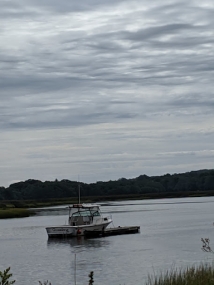 Looking out across the estuary

A ride, walk, or run along the Neponset River Trail presents the visitor with some of the ecological, historical, and recreational highlights of the area, as well as many friendly faces enjoying the outdoors. With broad accessibility and appeal, this path is thoughtfully designed and intriguingly beautiful.

About the author: Will Reason is a rising Senior at Boston University Academy, who writes about his experiences exploring the Neponset River and its watershed. His series highlights a different area of the watershed with each installment. He hopes to inspire readers to enjoy and help protect this fabulous urban waterway.