Click here for photos of the Quincy RiverWalk Grand Opening.

The RiverWalk includes a natural beach behind the Boston Scientific facility on Cmdr Shea Blvd., from which canoes and kayaks may be launched and landed. Free parking is available a few hundred feet from the launch. The Quincy RiverWalk is directly connected via the Neponset Ave. Bridge sidewalk to Pope John Paul II Park and the Neponset Greenway trail in Dorchester, which are also part of the Neponset River Reservation. 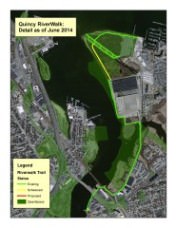 Except for Squantum Point Park, virtually all of the RiverWalk is built on private land. Public access to each property was obtained through the painstaking work of the Watershed Association, the Quincy Environmental Network and other local citizens, as well as through the cooperation of most of the landowners. The City of Quincy’s Community Preservation Committee and Mayor last year approved over $98,000 to complete the RiverWalk and the Watershed Association has spent tens of thousands more on paving a formerly gravel portion of the RiverWalk as well as purchasing and installing benches, kiosks, maps, and extensive signage.

The most difficult part of the whole effort was gaining public access to a half mile stretch of waterfront land running from the Adams Inn to Commander Shea Blvd. Back in 2004, the Watershed Association reached a Settlement Agreement with the developer of the Neponset Landing apartments at 2 Hancock St., through which NepRWA agreed to drop its opposition to the construction of the building in return for the developers promise to build an 8 foot wide walkway on that property as well as on properties owned by Adams Inn, MassDCR and the MBTA. The developer also agreed to provide a number of amenities, including benches, lighting, landscaping and rebuilding of a dilapidated pier. However, getting all these improvements actually built took a 10 year long struggle (only some of it caused by the developer) which involved two lawsuits, four conservation committee hearings, and two public meetings before the Quincy City Council. But in the end, with the help of courts, the Quincy City Council, and many others we got it done.

DIRECTIONS TO THE QUINCY RIVERWALK
Once on the RiverWalk, be sure to look for RiverWalk signs.

From Dorchester.  Take either Neponset Ave. or Gallivan Blvd. to the Neponset Ave. Bridge. On the Quincy side of the bridge, stay left to the light.