Restoring Our River, Celebrating Our Success, Building Our Capacity

From water withdrawal permitting, to municipal stormwater permits, a notable birthday and more, major projects and opportunities along the Neponset will come to a head during 2017. The Watershed Association needs your help to make the most of these opportunities and bring you a cleaner, healthier, more accessible river.

Read on to learn what’s coming in 2017, how our focus on municipal and state leadership is poised to bear fruit, and how you can help achieve these goals. 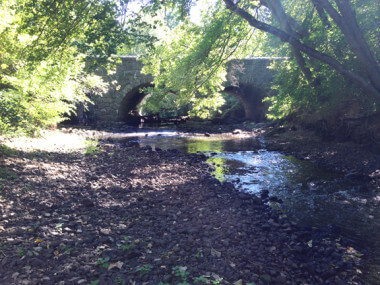 This year’s historic drought brought new attention to the effects of water withdrawals on the Neponset and highlighted serious problems with the state’s drought response.

Permits for all the large water withdrawals in the Neponset Watershed are scheduled for renewal during 2017, and because these permits last for 20 years, re-permitting is a once in a generation opportunity to make progress on streamflow.

We will be deeply engaged in the re-permitting process, using our technical and legal expertise to help communities reduce their impact on the Neponset.

With the help of generous individual donors last year, we launched our “Hot Spot” Monitoring Program, which enables staff to conduct follow up sampling at problem areas flagged by our water quality monitoring volunteers.

The goal is to zero in on specific pollution sources and work with communities to get them fixed.

Our first year was a tremendous success, locating at least four problem discharges. During 2017 we will work to ensure that the discharges we found last year get fixed, and investigate additional problem areas.

After years of working to get our communities ready, strict new municipal stormwater permits finally take effect in 2017. The new permits require cities and towns to reduce the amount of water pollution they discharge from thousands of stormwater outfall pipes, which could dramatically improve river health if communities do a good job.

We will get communities off to a strong start with our   innovative regional stormwater partnership.

We’ve made steady progress on restoring habitat for a rare population of native brook trout on Milton’s Pine Tree Brook in the Blue Hills.

We will secure permits to deconstruct three small dams and finish removing at least two of the barriers.

To help restore historic herring and shad runs up 17 miles of the Neponset, we will continue to press the Commonwealth to take action against polluters who contaminated river-bottom sediments.

Lastly, we’ll partner with the US Fish and Wildlife Service to identify and implement a range of habitat restoration projects in the upper Neponset using settlement funds from a Superfund site in Walpole.

This coming year, the Neponset is set to achieve a goal that the community and the Watershed Association have been working toward for more than 30 years: a continuous recreational greenway along the Neponset from the Blue Hills to the sea.

This goal will be largely realized once the “missing link” in the Commonwealth’s Neponset Greenway Trail between Central Avenue in Milton and Mattapan Square opens in early 2017. We are looking forward to a much deserved celebration!

But with the trail set to open, much of the river itself is still impacted by decades of accumulated trash and debris.

We will expand our volunteer river cleanup program to include new communities and engage even more volunteers so that everyone can enjoy both the new trail and a beautiful river to go with it.

It is fitting that 2017 will be such an important year for the river, because it will also be the 50th anniversary of the Neponset River Watershed Association.

In recognition of our 50th and the incredible progress we have made in turning the river into an asset for its communities, we will be making a special effort to get people out enjoying their river over the next 12 months.

Look for events and celebrations throughout 2017!

Read more about how we are trying to build a team that can achieve these goals during 2017, and how you can help make that happen!