The Dedham transfer station has officially been shut down

The Dedham transfer station, a former major source of pollution on Mother Brook, has officially been shut down by the Town of Dedham citing “serious structural and environmental safety issues”. Read more on Town of Dedham website.

The Town of Dedham has responded to our complaints, and their actions (described below) should greatly improve the situation.

Without household waste introducing new E.coli to the site, and without the sprinkler system washing pollutants into the river, we are hopeful that sanitizing the system will eliminate the problem until the ultimate fate of the transfer station site is determined.

We will continue to monitor the site regularly to ensure that the problem is in fact fixed.

A big thank you to Joe Flanagan and the Town of Dedham for taking this issue seriously and responding quickly to protect Mother Brook.

On the banks of Mother Brook, just below the transfer station, is a drain pipe designed to collect rain water and discharge it into the brook. (See photo below.)

Unfortunately, after sampling this pipe we discovered that it was intercepting and discharging a highly polluted liquid. The pipe continues to discharge during dry weather, when there shouldn’t be any flow. 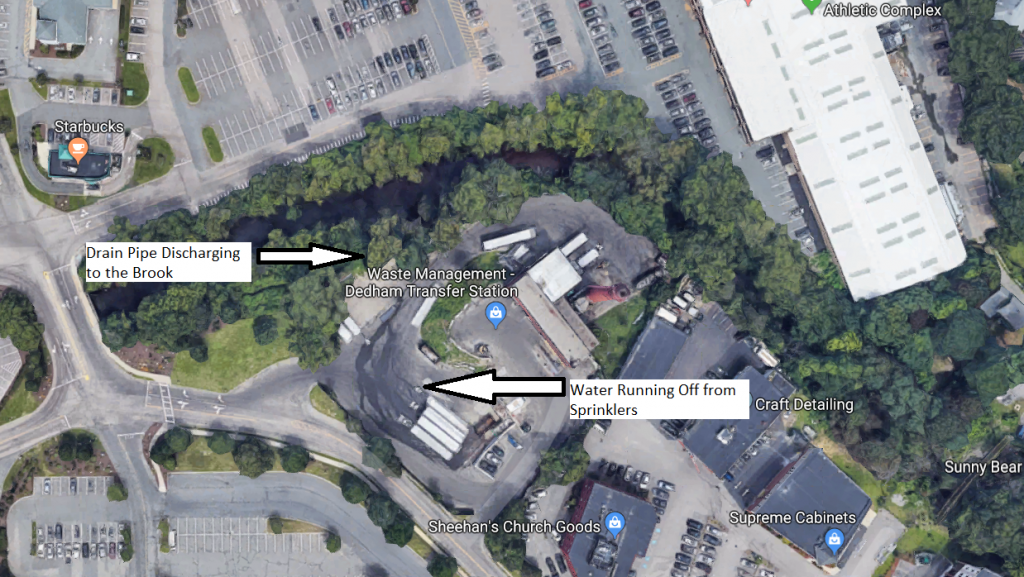 At first we suspected that the liquid was “dumpster juice” being washed off the pavement by sprinklers and collected by a storm drain that leads right to the Brook. Dumpster juice, not surprisingly, contains high concentrations of bacteria and other pollutants. Discharging it to a storm drain, let alone intentionally washing it off into the storm drain using sprinklers as the contractor operating the transfer station is doing, is a clear violation of the Clean Water Act.

However, during our most recent inspection there was much more flow being discharged than we would expect to be produced by a few sprinklers, which leads us to suspect that their may be an additional source of pollution in the area. The prime suspect is a nearby sanitary sewer line. Its possible that this sewer pipe has a leak and that is getting into the nearby drain pipe and further adding to the problem. We are currently helping the Dedham DPW get to the bottom of this issue so that it can be resolved as quickly as possible.

The Dedham DPW  investigated the sanitary sewers in the area, and has ruled out that as a possible source of contamination. They have also conducted dry weather and wet weather sampling at the outfall and have confirmed our results for dry weather. We are still awaiting the wet weather results.

In order to determine the impact that this pipe is having on Mother Brook, we also sampled upstream and downstream of the pipe. On the days we sampled, the water upstream of the pipe was clean enough for swimming with E.coli concentrations of 21 and 55 mpn respectively, but 100 yards downstream of the pipe, E.coli concentrations weren’t even clean enough for boating (2,419.6 mpn). Its unclear just how far downstream the contamination plume reaches, but it is clear that the pipe is contaminating the brook for a significant distance, and we suspect this source is likely the cause of water quality violations that have been documented downstream by our volunteers for some time. You can explore our hotspot water quality data on our interactive map found here

Controversy Over the Future of the Transfer Station

This is just one issue in an on-going debate about the future of the Dedham Transfer Station. The transfer station is operated by a contractor, and is not involved in collecting or disposal of the Town’s curbside trash, but rather accepts trash almost entirely from other communities for a fee.

The Town has recently developed preliminary plans to renovate and update the transfer station to meet current standards. At a recent selectmen’s meeting, many local residents came out to voice their opposition to this plan and to propose instead that the town should shut down the transfer station and use this land for something else.

The neighbors cited issues with odor and air quality, safety concerns related to the deteriorating smoke stack, devaluation of their properties due to pollution, garbage trucks illegally trespassing across private property to enter and exit the site, and the fact that the transfer station is only open to accept garbage from Dedham residents for limited hours on Saturday mornings. With looming costs of upgrading the station, dismantling the dangerous smoke stack, fixing this polluted discharge, and potential tax abatement, it seems that there are more lucrative options for the town to generate revenue from this property. 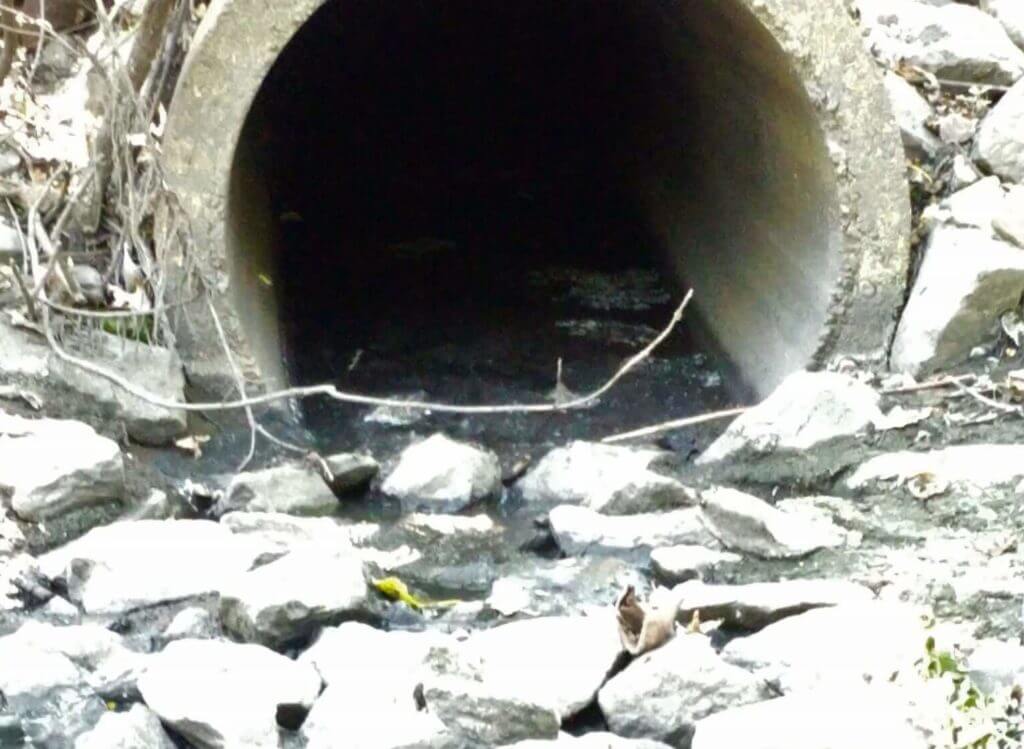 While we would prefer that the site be redeveloped for a land use that is more appropriate for a river front property, our main concern is that this pollution issue is dealt with as soon as possible. It is not OK to wait to address this issue until the fate of the site is determined years down the line. If left unresolved, the town and their contractor are opening themselves up to the possibility of fines from the EPA upwards of $50,000 per day for every day that they are out of compliance with the Clean Water Act. It would be best to avoid that possibility all together by fixing the issue as soon as possible.

A few of the possible fixes that could be implemented today to address this issue are: retrofitting the drain pipe to discharge into the sanitary sewer or a “tight tank” instead of the river and building a temporary canopy over the receiving area to keep rainfall out, discontinuing operations at the transfer station until appropriate facilities can be put in place, or fixing the leak in the sewer if in fact there is one contributing to this issue.

Dedham is lucky to have great leadership and staff within its DPW who have repeatedly expressed their desire to do the right thing and fix this issue. We are confident that with the necessary support they will be able to do so.

4 responses to “Serious Problems at the Dedham Transfer Station Improved”