The Canton Conservation Commission’s next hearing on the project is on Wednesday, April 13 at 7pm at the Pequitside Tavern.

The redevelopment of the Plymouth Rubber Property in Canton is now well underway. All of the former factory buildings have been demolished and the developer is beginning to appear before local boards to obtain final construction permits. The now cleared site, dotted with huge piles of earth, crushed concrete and other demolition materials makes an impressive sight from the sidewalk on Revere Street. 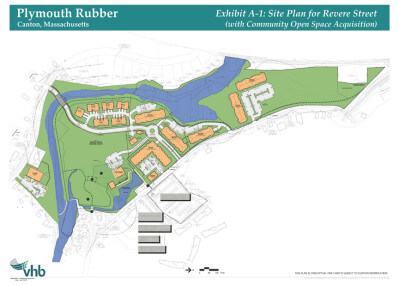 The plan calls for construction of a mixed use development, with a significant portion of the property to be acquired by the Town of Canton for conservation land, historic preservation and/or municipal use, making a unique opportunity for Canton to reclaim such a large piece of land near the center of town for community use.

The historic preservation component of the project will stabilize and restore two buildings, a barn and copper rolling mill, both built by Paul Revere when he first developed the property for industrial use. The plan is to transfer these buildings to a new nonprofit which would operate them as a historic education center.

The proposed conservation land, for which NepRWA has been asked to hold a conservation restriction, will open up public access to the East Branch of the Neponset River, as it flows around the perimeter of the site and/or through a series of culverts on the property. This is a section of waterway that has been fenced off from the public for many, many years and that has the potential to be a tremendous recreational and aesthetic resource for the Town.

The Neponset River Watershed Association (NepRWA) has been following and commenting on the permitting process. The first portion of the permitting that we have commented on is the plan to “restore” the 1960’s vintage flood control channel, known as the “bypass channel” which was built by the Army Corps and carries the East Branch of the Neponset River around the site. 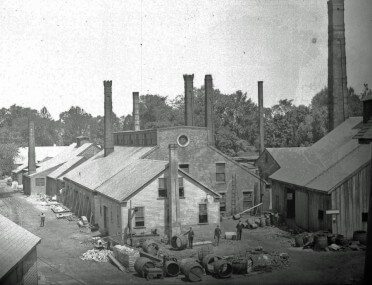 The Bypass Channel has not been maintained by the Town over the years, and the Army Corps has ordered the Town to remove vegetation, accumulated sediments and wetland plants to ensure adequate flood conveyance capacity. As part of their mitigation package, the developer has agreed to do the repair work for the Town and the Town is currently in the process of seeing required permits.

NepRWA has a number of concerns with the bypass channel, not least of which is that it was designed in the 1960’s with no consideration whatsoever for wildlife habitat, recreational use or aesthetics. NepRWA believes that now is the ideal time to rethink and re-engineer the bypass channel, to integrate it into the historic features and conservation land on the site, and give residents of Canton access to a piece of recreational waterfront worthy of the Town.

Short of that, we have been advocating for modifications to the way water flows through the site, to ensure that the historical industrial design for the river, which directed as much flow as possible into underground pipes with no ecological or community value, is not restored.

Instead, we would like to see flows directed into the above-ground bypass channel which goes around the perimeter of the site, and which for all its inadequacies, is at least accessible for use by wildlife and community members.

At the same time, we are urging the town to modify the cross section of the bypass channel to give it a more natural “V-shaped” profile instead of restoring the original design which is 60 feet wide with a “flat-bottom” cross section that leaves the water a proverbial “inch deep and mile wide” during periods of low flow.

Lastly we are urging the Town to take additional steps to preserve as many existing trees as possible on the south (Neponset Street) side of the bypass channel and to plant additional trees to help provide shade and keep water temperatures cool where there are no existing trees.

The Canton Conservation Commission’s next hearing on the project is on Wednesday, April 13 at 7pm at the Pequitside Tavern, 79 Pleasant St., Canton.