A photographic journey along the Neponset River shows progress, but there is still work to be done.

On the Monday before Christmas NepRWA board member Martha McDonough and DCR planner Stella Lensing pushed off from the canoe launch at Martini Shell Park to have a look at some of the remaining trouble spots downstream as far as the Tileston and Hollingsworth Dam, and I tagged along to get photos.

Here we are approaching the Dana Avenue bridge from upstream, with a dead elm fallen on the left bank. When the river was channelized through most of Boston in the early 1960’s, the banks were graded and armored with boulders, and since then trees have colonized the gaps between the stones. These trees lean toward the light over the water and tend to fall into the river–good for habitat, sometimes bad for traffic. Elms are the main offenders since they die young of dutch elm disease. On either side of the fallen elm are scaly-barked river birches, a Neponset specialty. 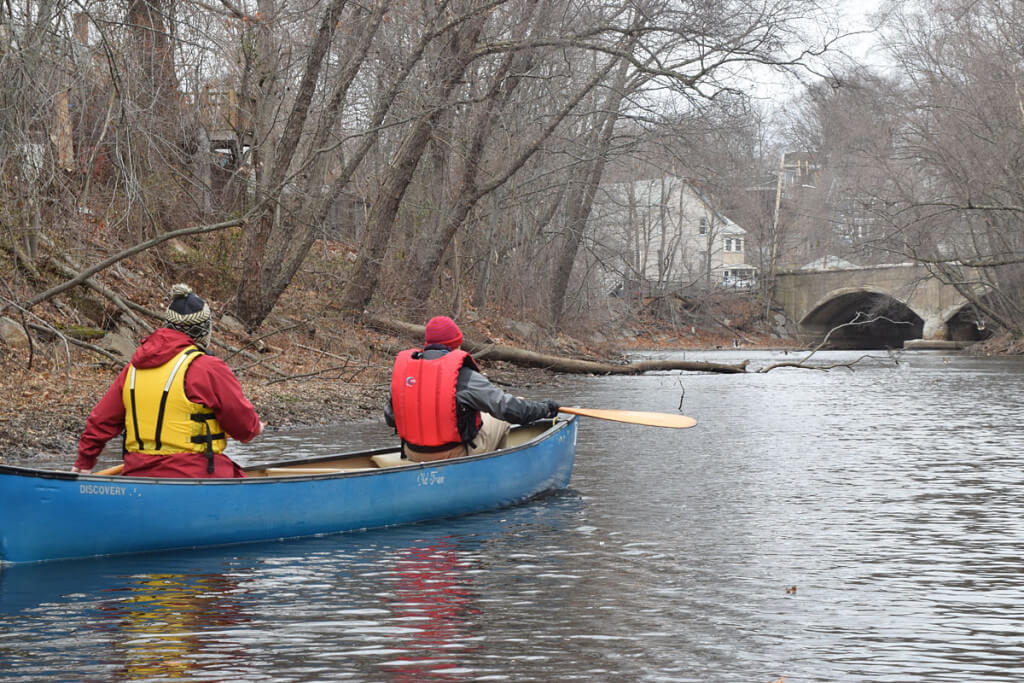 Here you can see the ramp at the Fairmount commuter rail station, with its tiled roof. Atop the bank in between is the former site of the Lewis Chemical Corp. at 12-24 Fairmount Court, a federal Superfund site, which was demolished in 2013. Lingering hot spots make redevelopment of the site problematic. 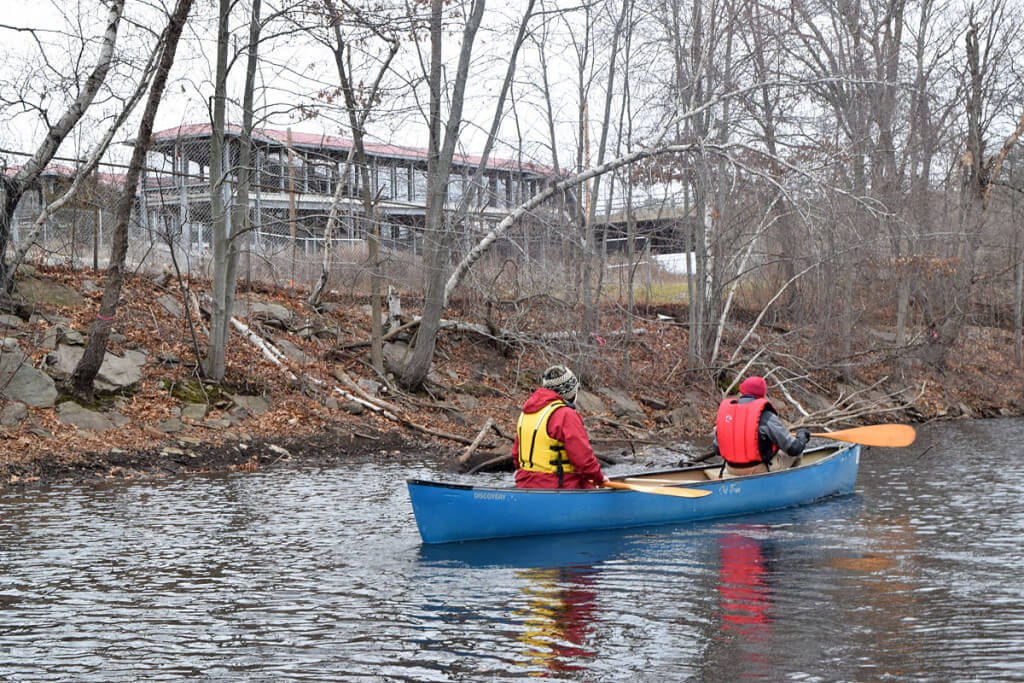 Below is the big apartment building at 605 Truman Highway just downstream from the Fairmount Avenue bridge, with a growing trash deposit jammed against the chainlink fence along the river. Topped with three strands of barbed wire, this fence is nearly continuous along the Neponset in Hyde Park. It was reportedly installed circa 1960 after a child drowned in the river. In my opinion its time has passed. 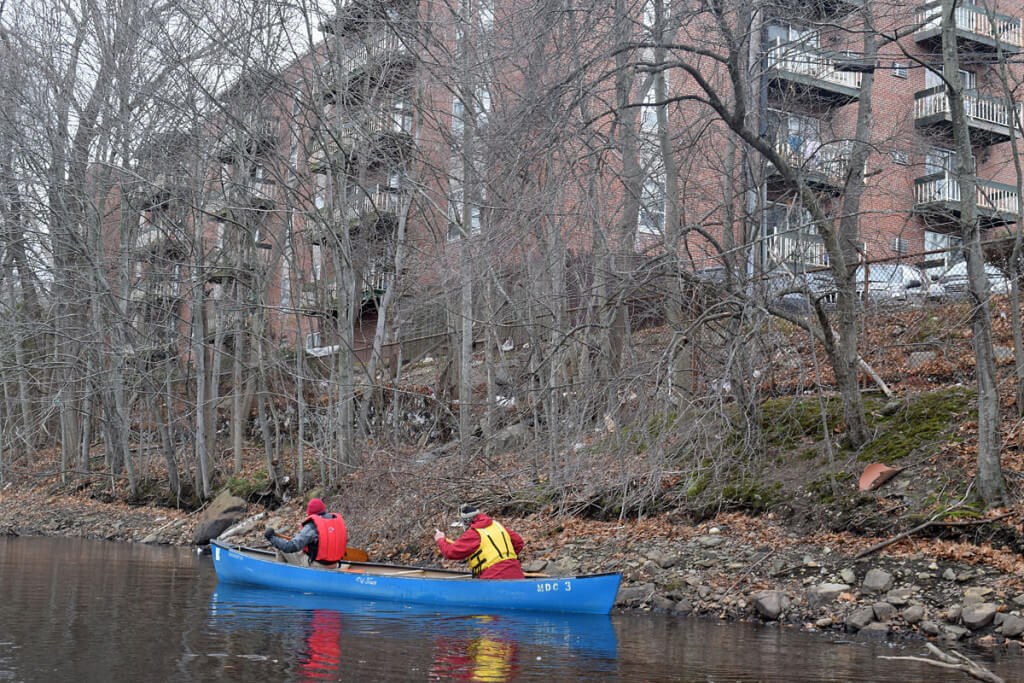 Here’s the fence again on the left bank at 19 Maida Terrace. Probably because of the lack of structures near the water, the bank was not filled and rip-rapped here and has a more natural appearance. 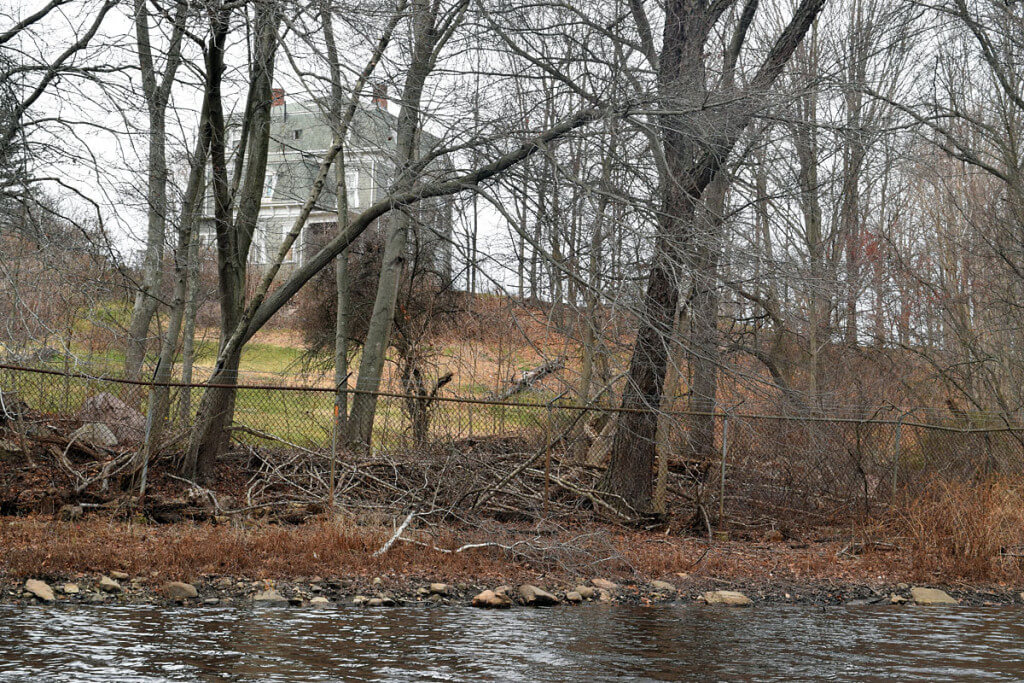 We turned around at the Tileston and Hollinsworth Dam, which is showing its age. The left-side bascule gate is rotted out and the river leaks through it. This dam interrupts fish passage and serves no useful purpose. At rear is the new development on River Street called the Shops at Riverwood. 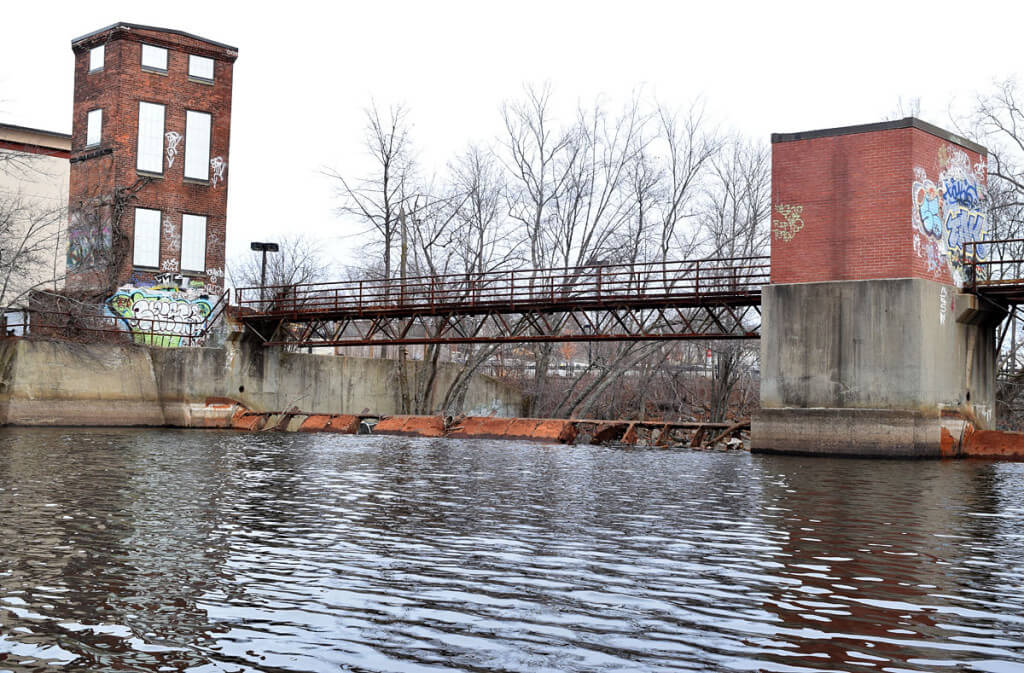 Here’s Stella and Martha showing their form on the return trip. I was alone in my boat and had a hard time keeping up. Stella is project manager for the much-anticipated extension of the Neponset Greenway from Central Avenue upstream to Mattapan Square, now under construction. 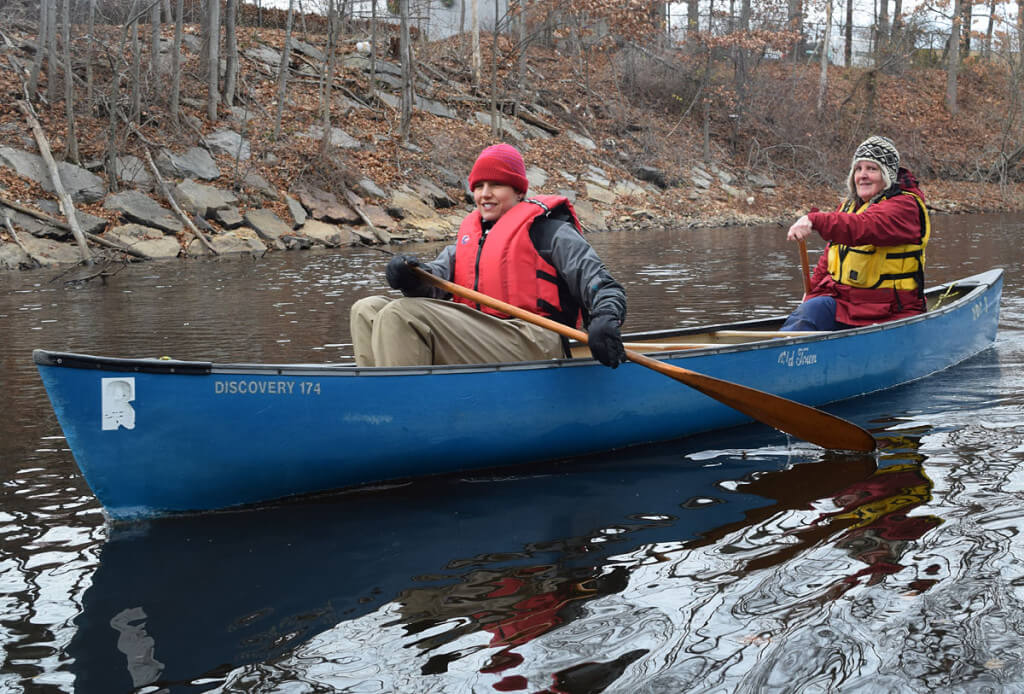 Here’s Martha digging into the southerly headwind that made the return trip a workout at 50F. We got warm. 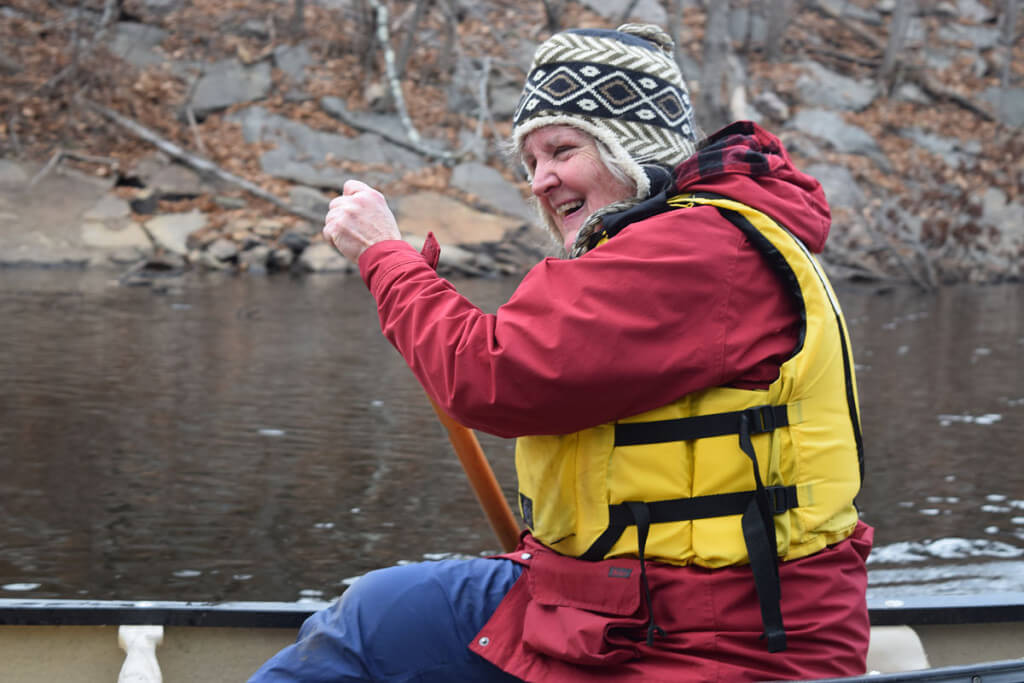 Here we are approaching the Dana Avenue bridge from downstream. Mother Brook enters at right behind the central pier. The far bank under the span at left is the Blake Estates Urban Wild on Fulton Street, an important staging area during recent cleanups. 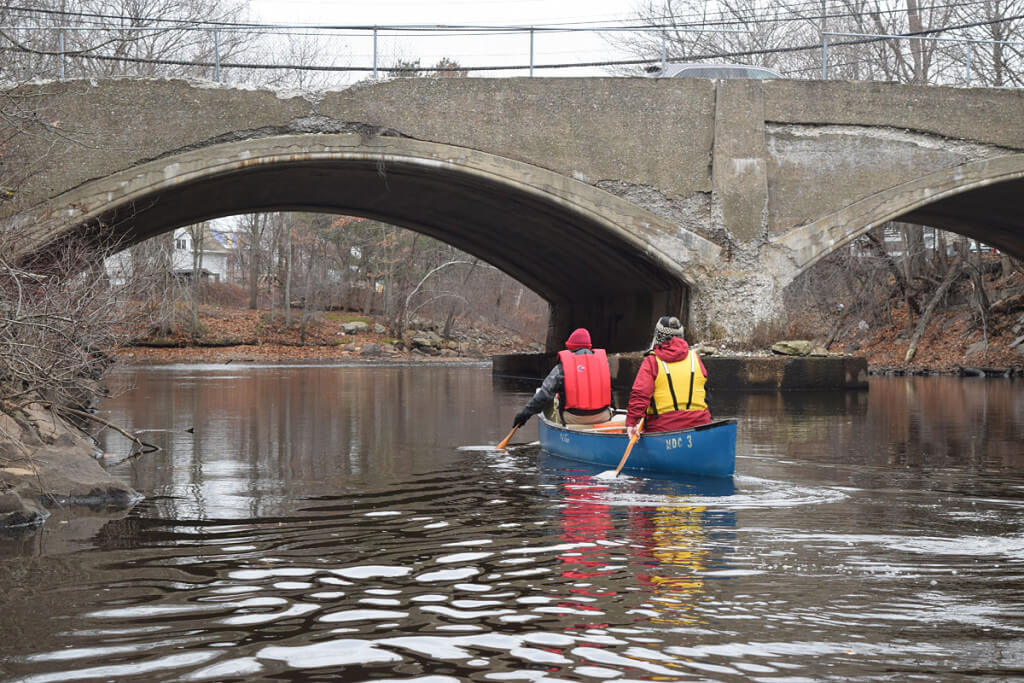 The B Street footbridge was formerly a major obstacle, thanks to a deep deposit of drowned shopping carts–now mostly gone, thanks to Martha and her cleanups. At rear is the concrete mixing plant at 8 B Street. 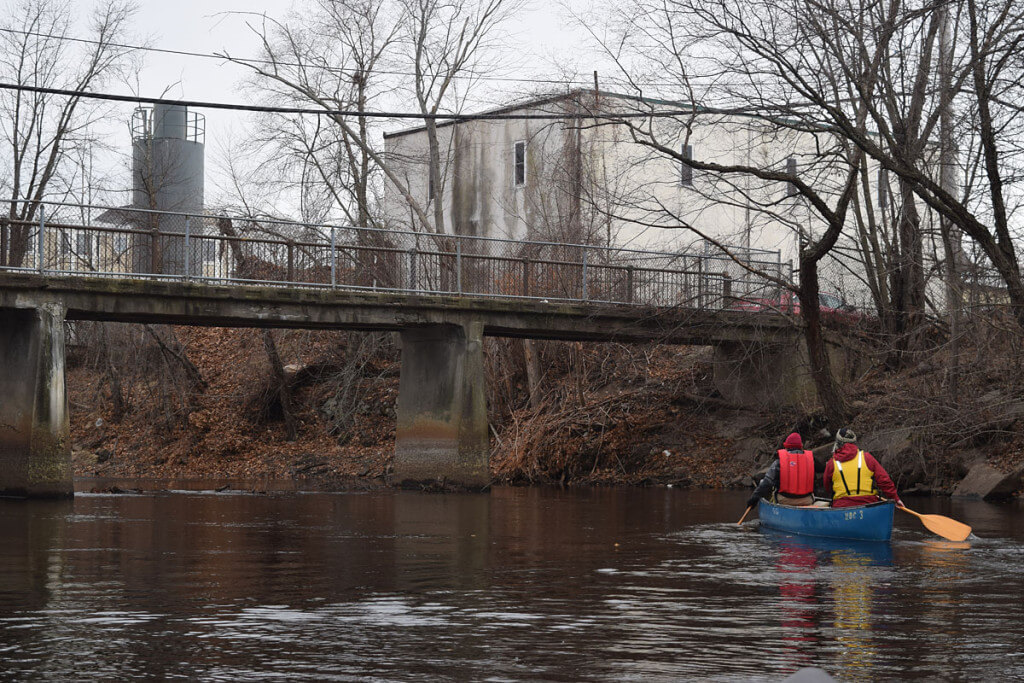 Martha is right; the best way to see the river is from the river.