At this time of year, when biological activity is at a mininum and anything exposed to air risks freezing, one plant stays green by staying underwater.

Here it is in the Blue Hill River alongside Rt 128: 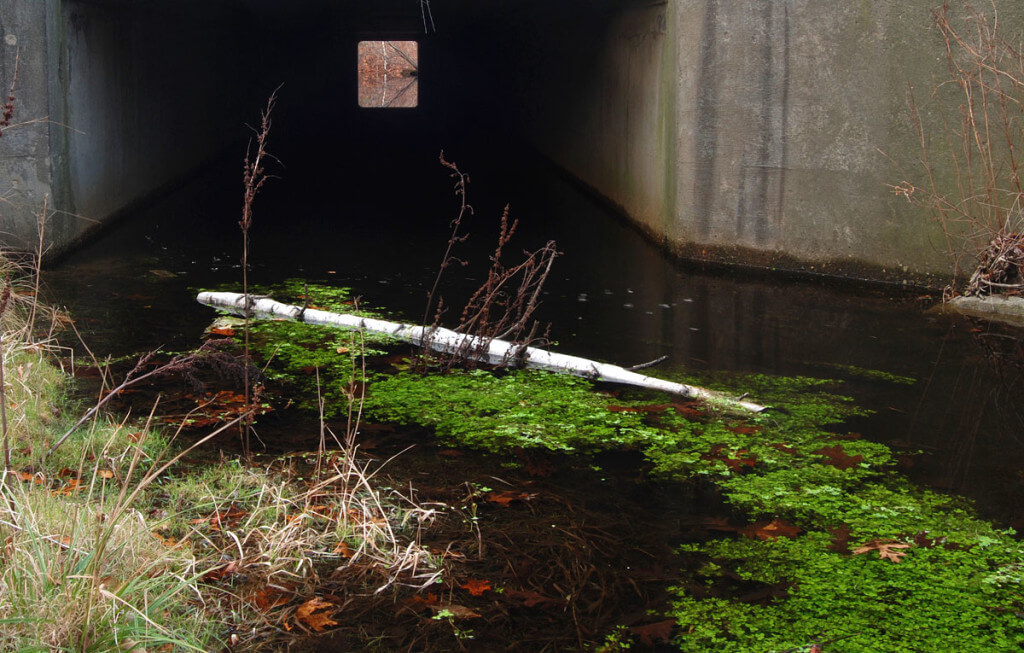 Here it is again, looking downstream toward Ponkapoag: 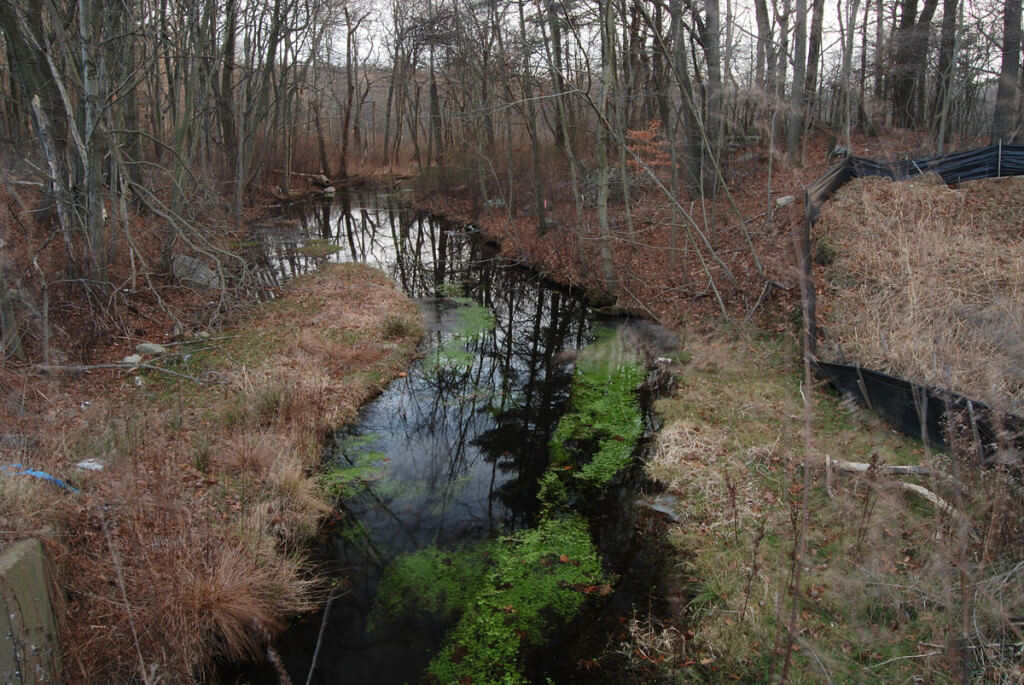 Both these photos were taken on December 11, not yet officially winter, but here it is on the other side of the culvert, at the southeast corner of Brookwood Farm, on February 14: 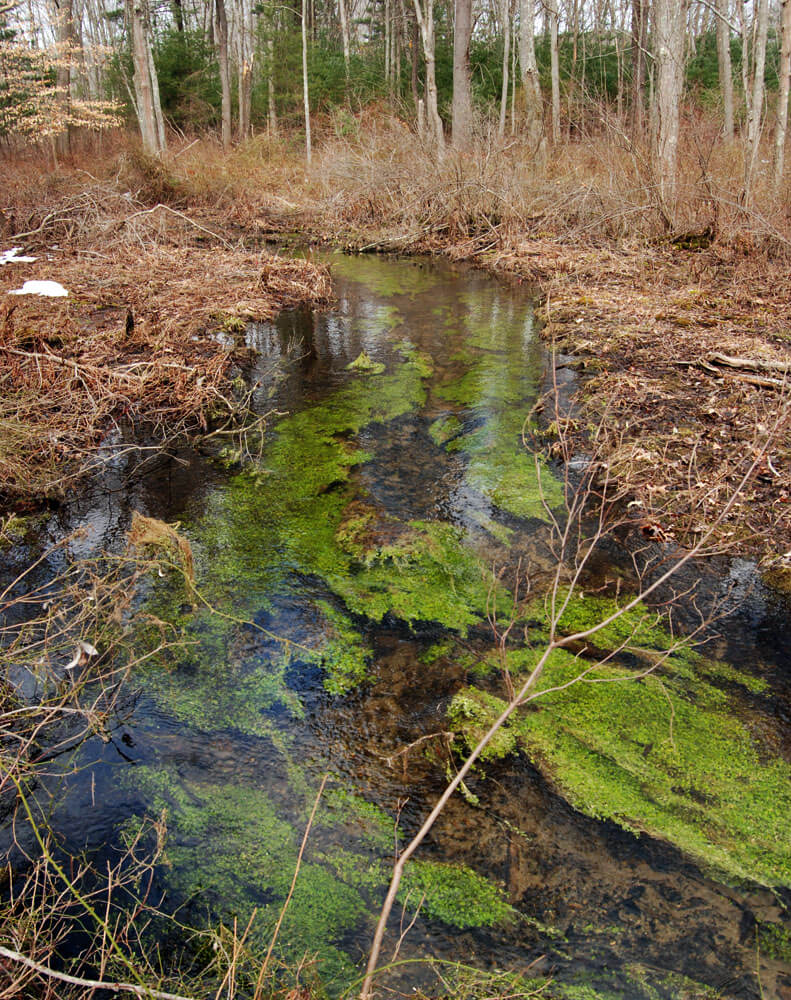 In quieter water it can nearly fill the water column, as here in New Milford, CT on December 27: 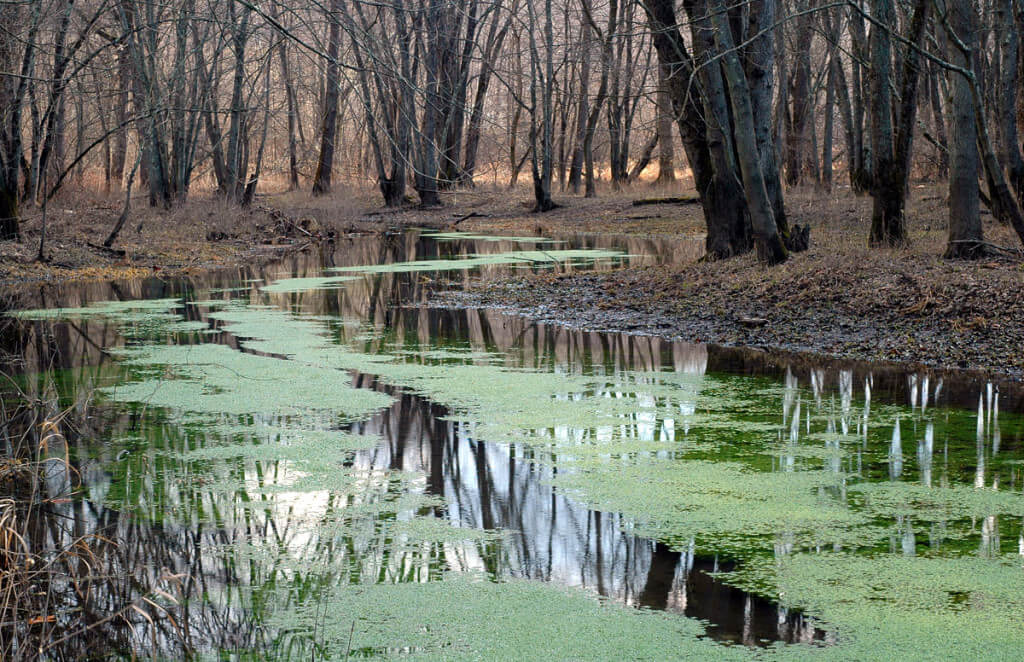 This is water starwort, Callitriche sp., an herb in the plantain family. It grows in warmer weather as well, but stands out less, as here at Ponkapoag Golf Course on June 19, forming rounded mats at the edge of a drainage ditch: 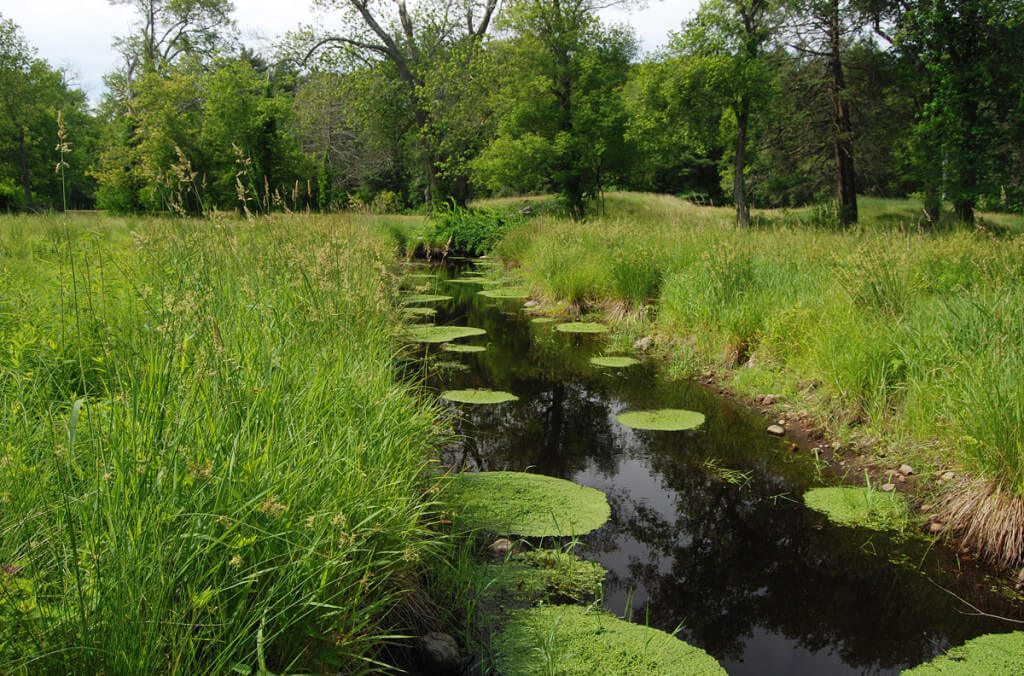 There are five species of Callitriche in New England, and if you want to ID them you have to do it in early summer, when you can find flowers and fruits. Here it is in bloom, with long-stalked stamens reaching up from under the floating rosettes at the stem tips: 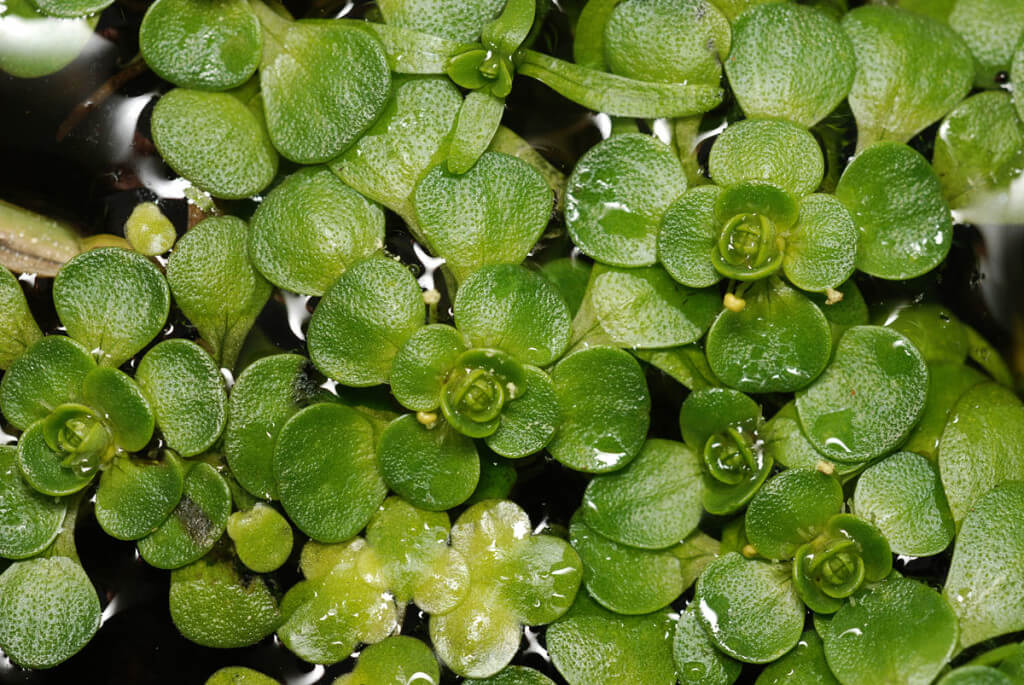 These are so-called apetalous flowers, and are easy to miss. Evidently the pollen falls off the ascending stamens and floats away, with luck ducking under another rosette and contacting a hidden submerged female flower, which then produces a pair of tiny bean-shaped seeds barely 1 mm long as seen here, from Pope’s Pond in Milton on July 7: 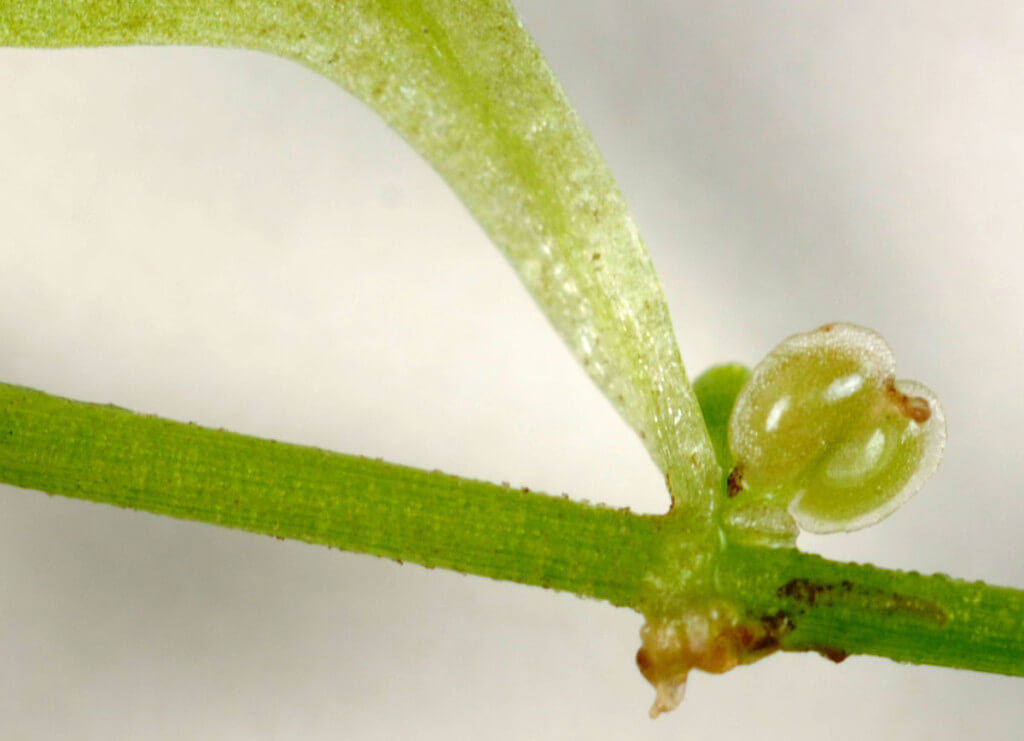 The transparent wings on these seeds, reaching from top to bottom, indicate that this is pond water starwort, Callitriche stagnalis, an introduced species from Europe. Presumably the mature seeds will break away and float to a new location.

Here’s a different-looking starwort, with narrow submersed leaves, photoed in a ditch alongside Blue Hills Parkway in Milton on December 31. Because it had no reproductive parts, I wasn’t able to key it to species: 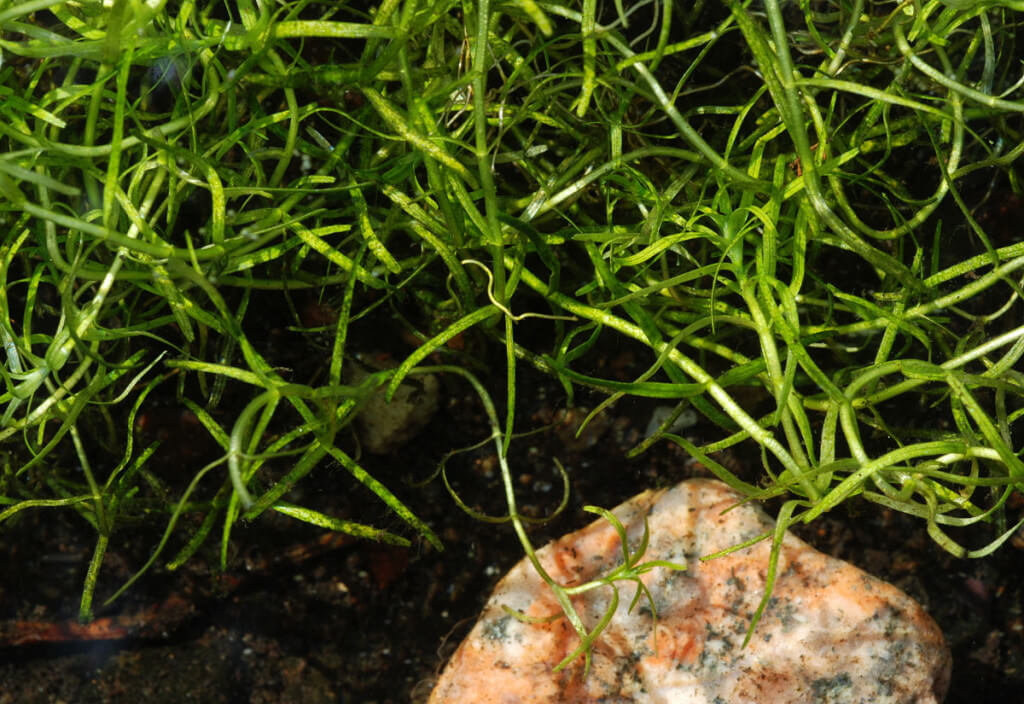 I rarely see this plant in shady streams, vernal pools, or woodland ponds. It seems dependent on a certain amount of organic enrichment provided by highway outfalls, golf courses, or leaking sewers. Perhaps it helps to take up these pollutants, even in winter, and hence contributes to water quality.