It's rare to find a fully submerged car in a river, never mind two of them.

During the Neponset River cleanup in Hyde Park last fall, volunteers knew to expect trash in the water, but no one expected to find a fully submerged car, never mind two of them.  This spring, with the help of the Merrimack River’s Clean River Project, the MA State Police, and Interstate Wrecker Service of Canton, a barely recognizable 1970’s Gran Torino and a 1990’s New Yorker sedan – both reported stolen – were removed from the bed of the river. The floating bottle here marks the first prize, in eight feet of water just downstream of the Dana Avenue bridge with the Boston DPW yard at rear. 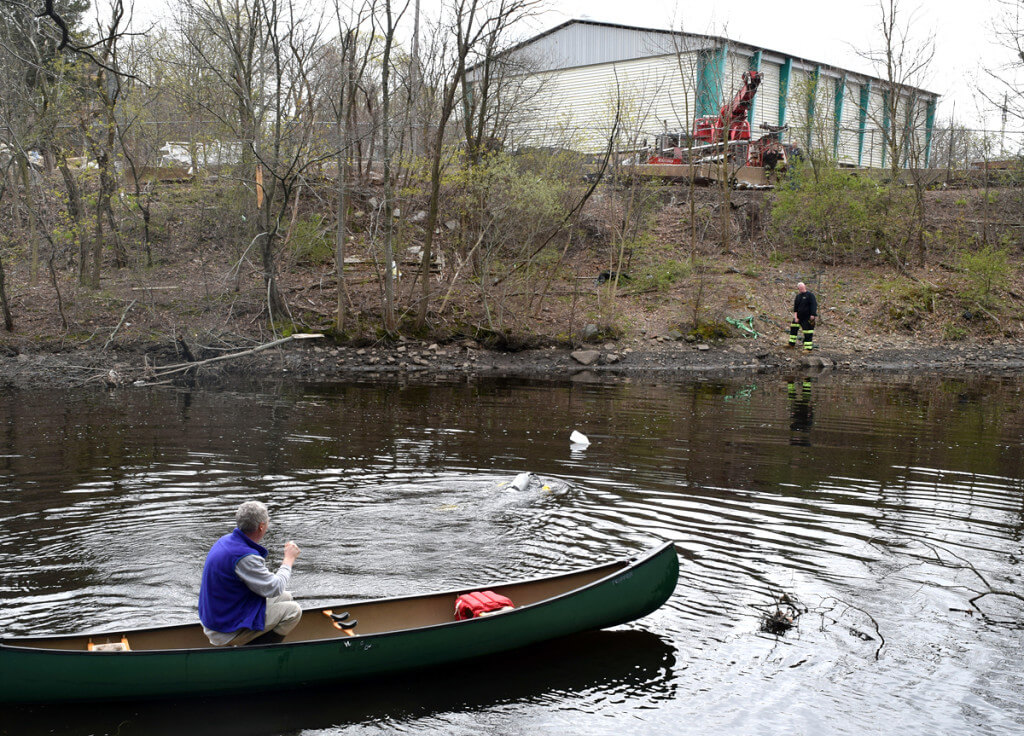 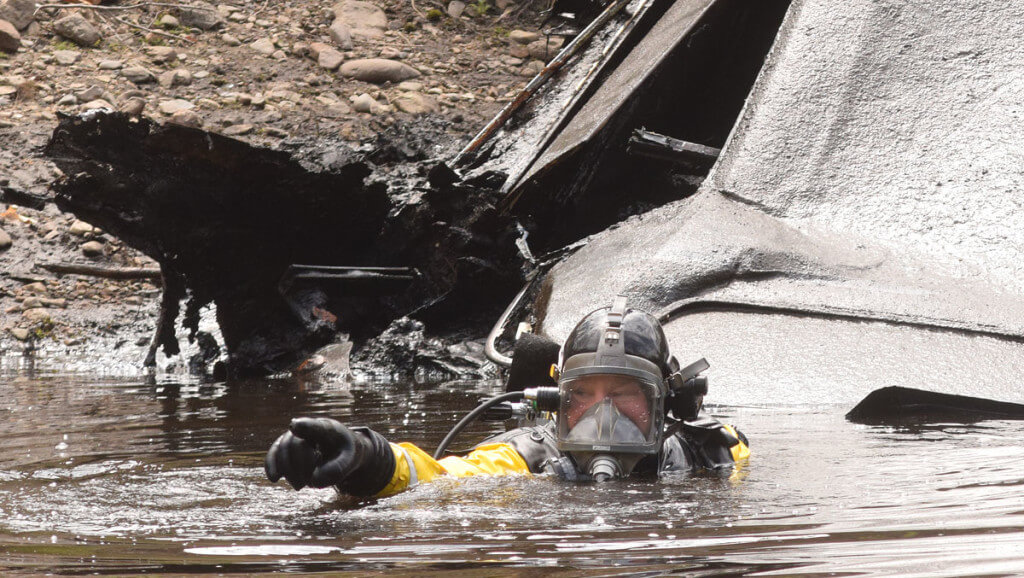 After 40 years in the river even a steel frame rusts out, and big chunks will come off if tugged–in this instance the engine and front end. 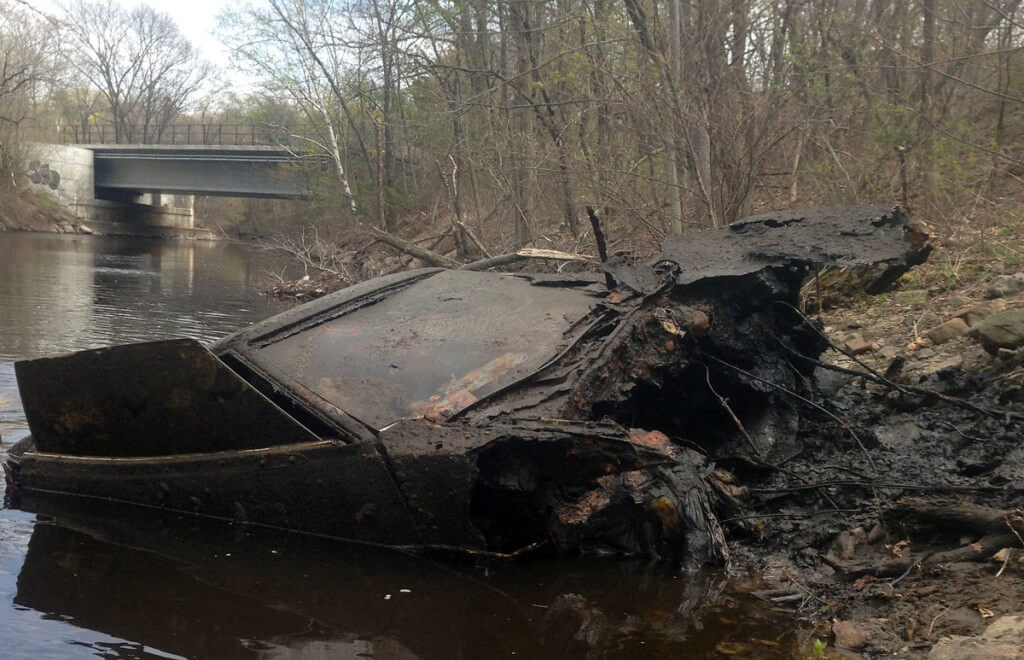 Incidentally, because the Torino was found with its windows closed, there was some concern that it might contain human remains, but none were discovered. 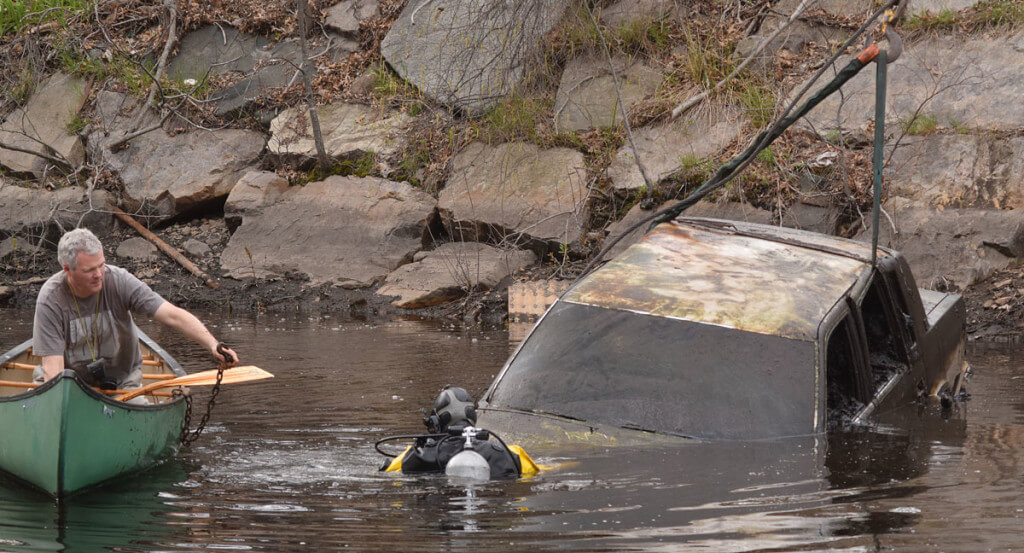 Here’s the car halfway up the bank with Fairmount Avenue at rear. In contrast to the Torino, it remained intact. 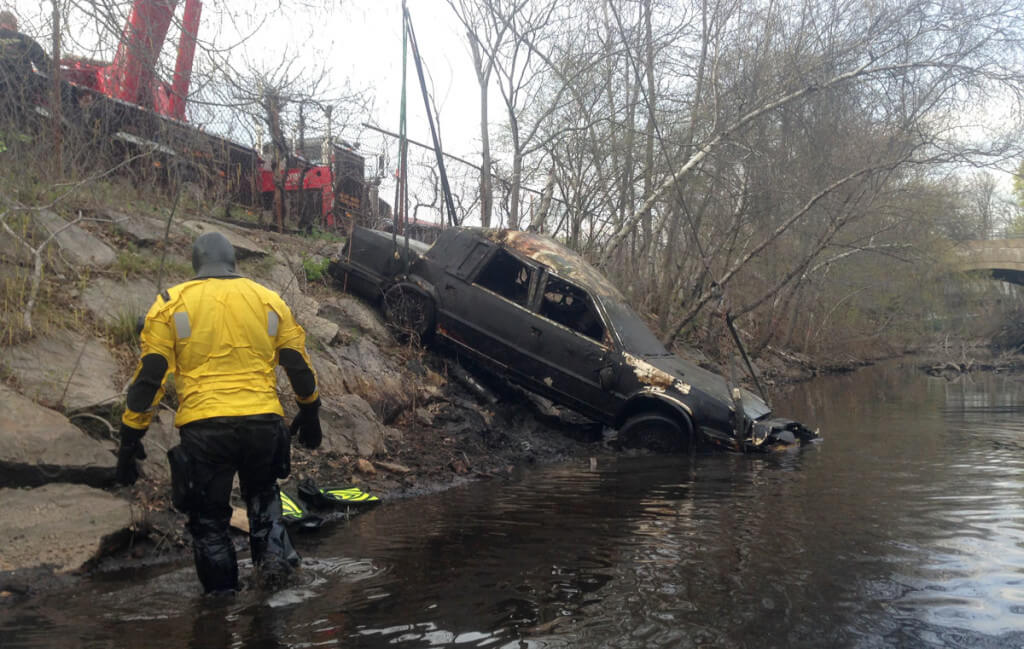 But the windows were open and the car was filled with mud to the headrests. 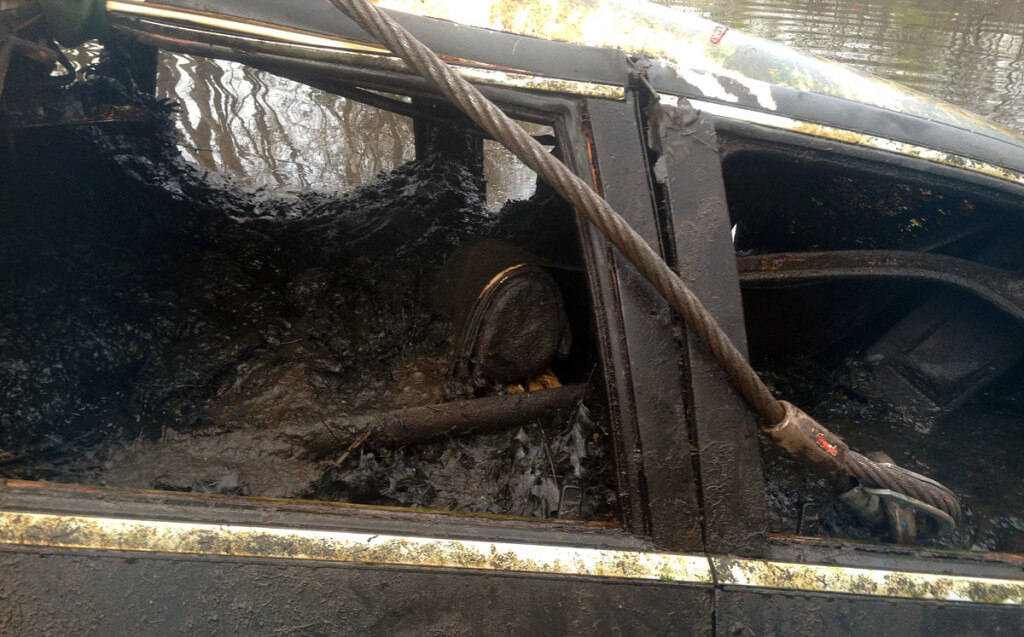 Here’s the plate from the New Yorker. Both plates were legible and allowed troopers to ID the cars.

Observers gathered at the rear of 707 Truman Highway. 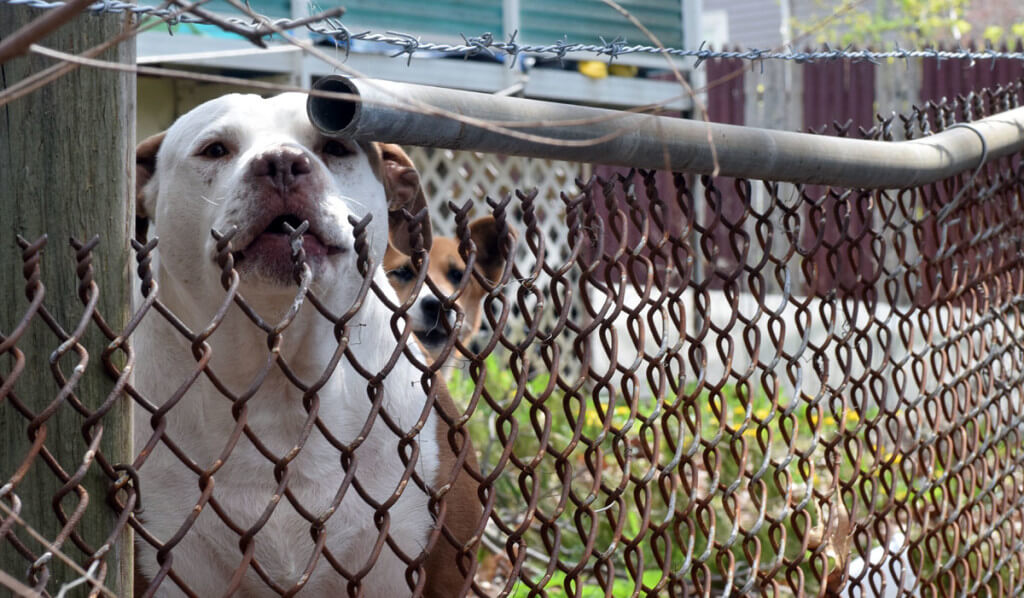 The New Yorker was hoisted intact over the fence around 12 Fairmount Court, former site of Lewis Chemical. That was the last we saw of it. 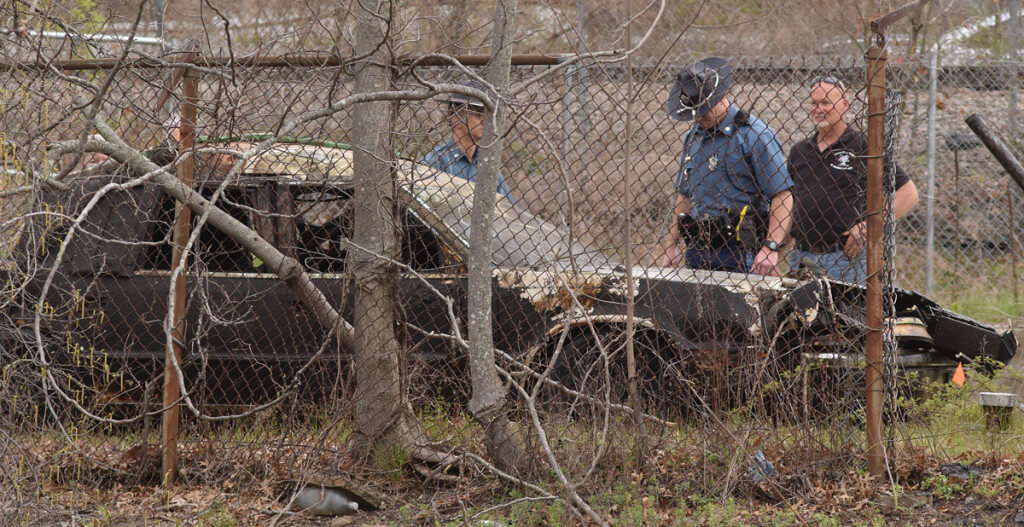 And here are Hyde Park activists Rita Walsh and Martha McDonough (a NepRWA board member), who made it all happen. Thanks ladies! 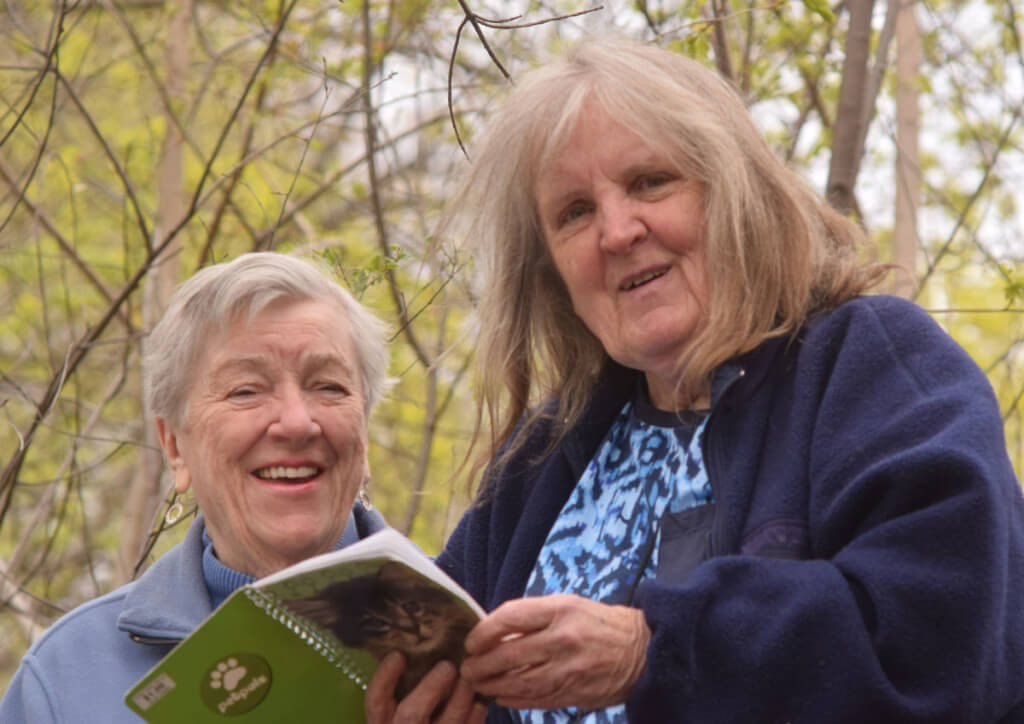