Exploring the Greenway Trail from Mattapan Square to Milton Village and back. 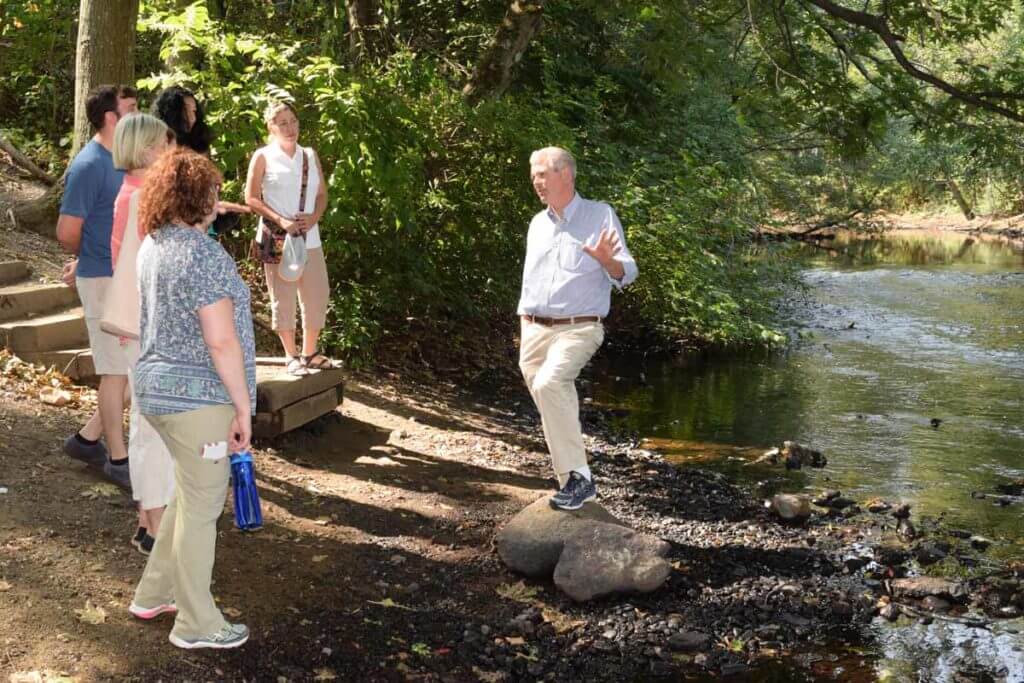 Here we are at the canoe launch on the Milton bank just above Mattapan square. The river is low; in spring it reaches the base of the steps. What was Ian talking about? I’m sure it was interesting. 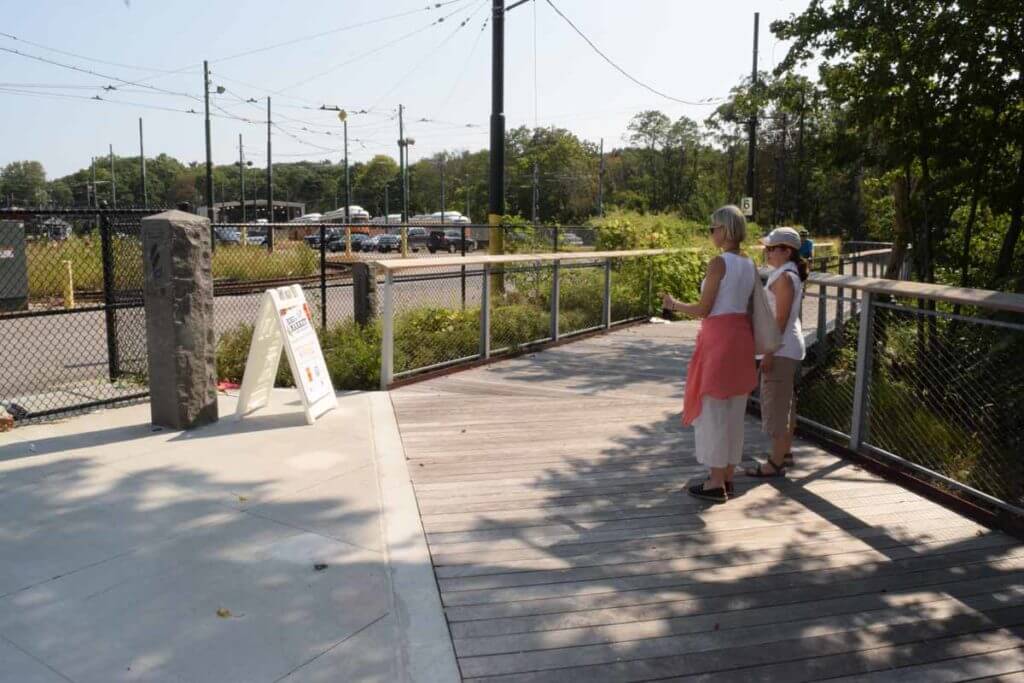 Here’s Dee and Nancy at the Greenway entrance between the MBTA yard and the Blue Hill Avenue bridge. I believe the yard gave up a little space here because it formerly reached right to the top of the bank. The planks tell you where to go. 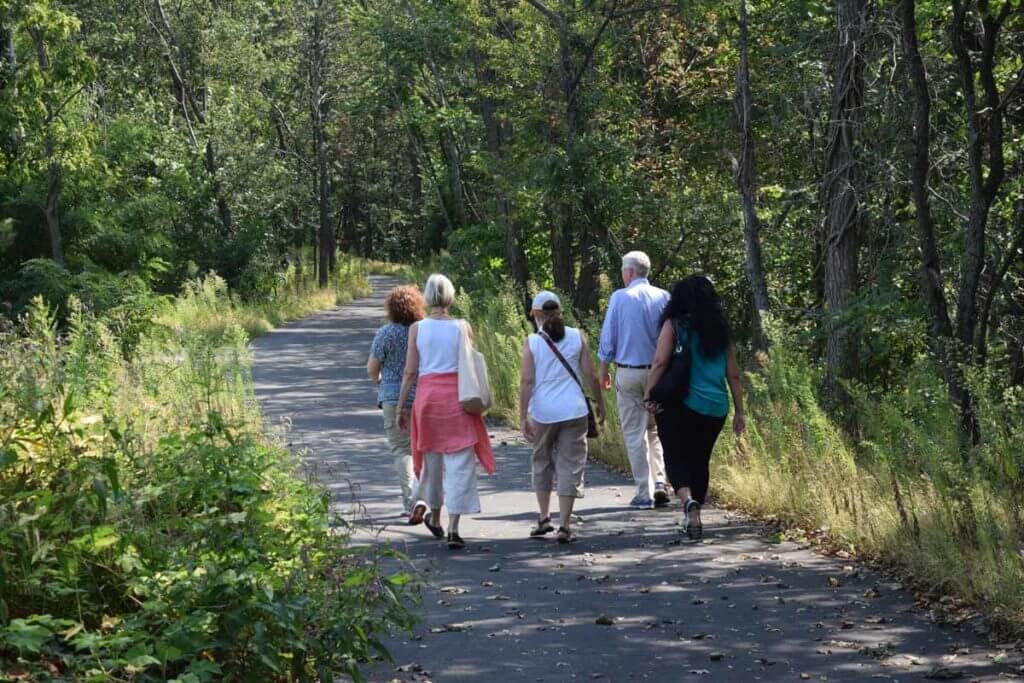 Here the path runs along the north bank in Mattapan across the channel from Unquity House in Milton. This is the default blacktop used on most of the trail. The river is out of sight to the right. These young woods date from the mid-1960s channelization project, when the banks were filled and graded. 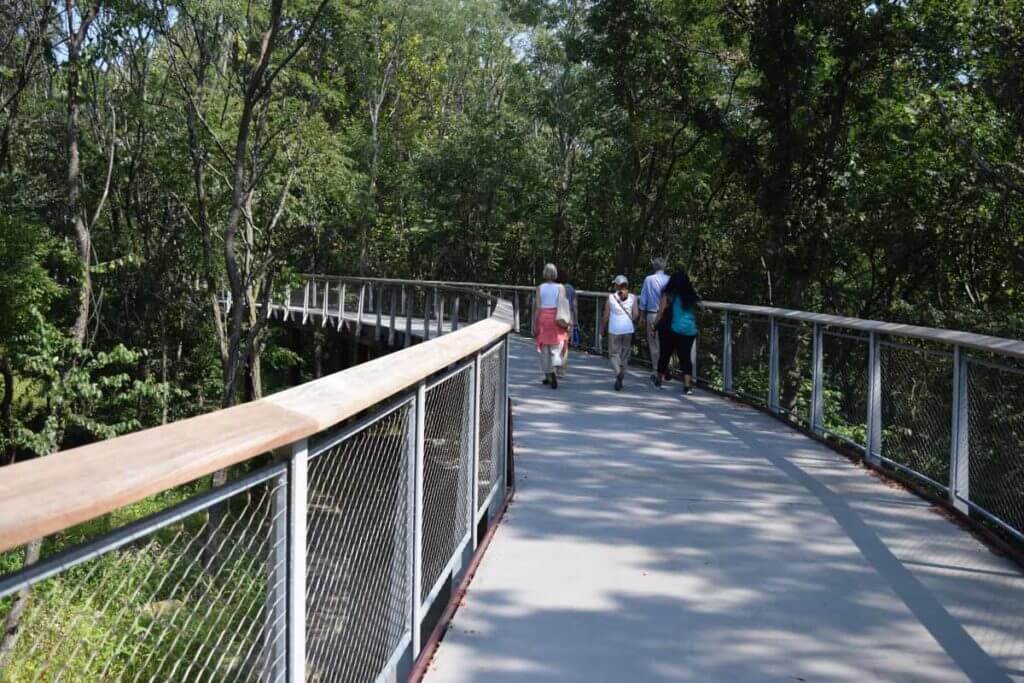 Here’s the start of the long curving bridge over the MBTA tracks. It rises gradually and gets into the trees. The high railing gives it a comfortable feel. I didn’t notice any built-in lighting, unlike the new North Bank Bridge in Cambridge. 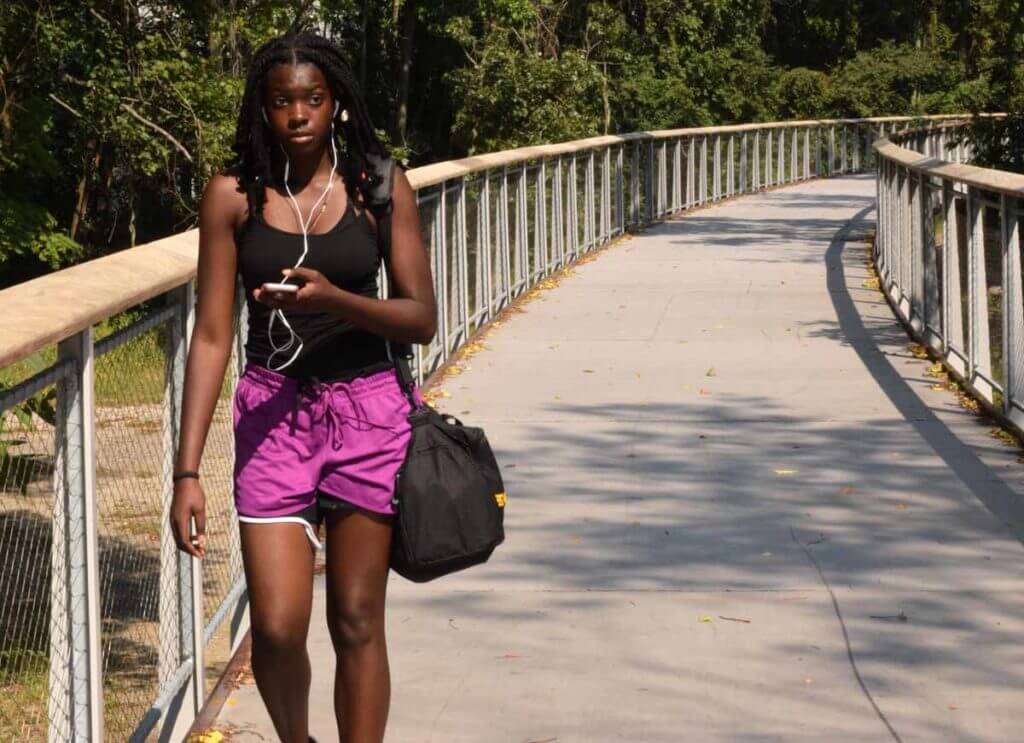 Here’s the high point of the bridge over an old mill site at the east end of the MBTA yard. The river curves east with the path but again it is hardly visible through the trees. It should be more evident when the leaves fall. 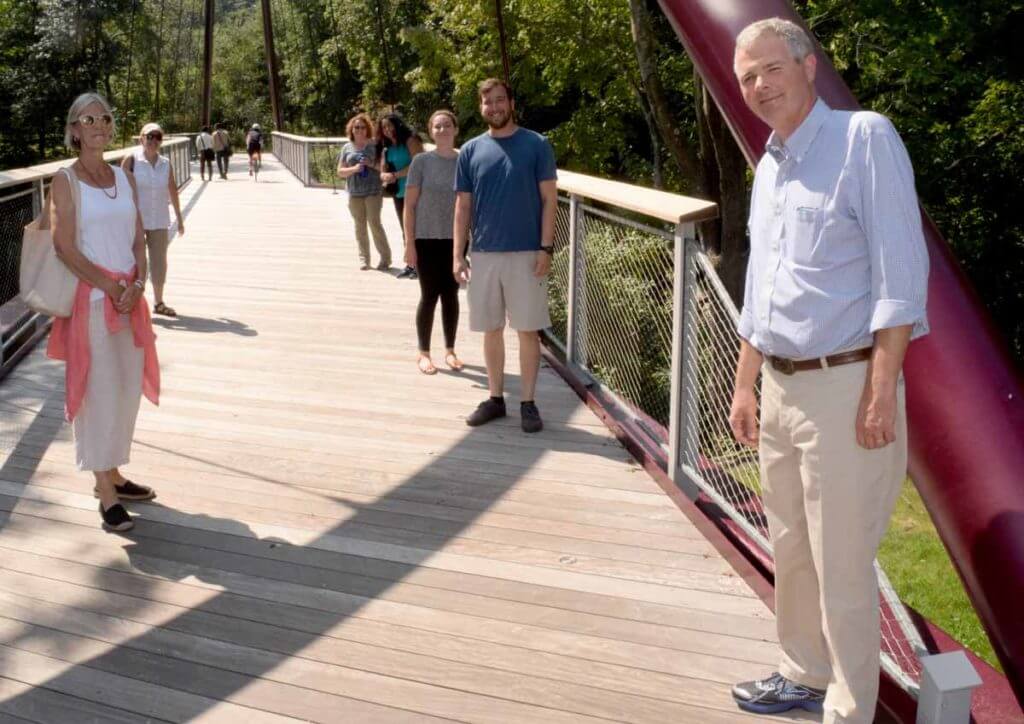 Here’s the other new bridge, which carries the path back to the Milton side. DCR named it the Harvest Bridge, “neponset” reportedly being Algonquian for “harvest.” It is a gorgeous thing. 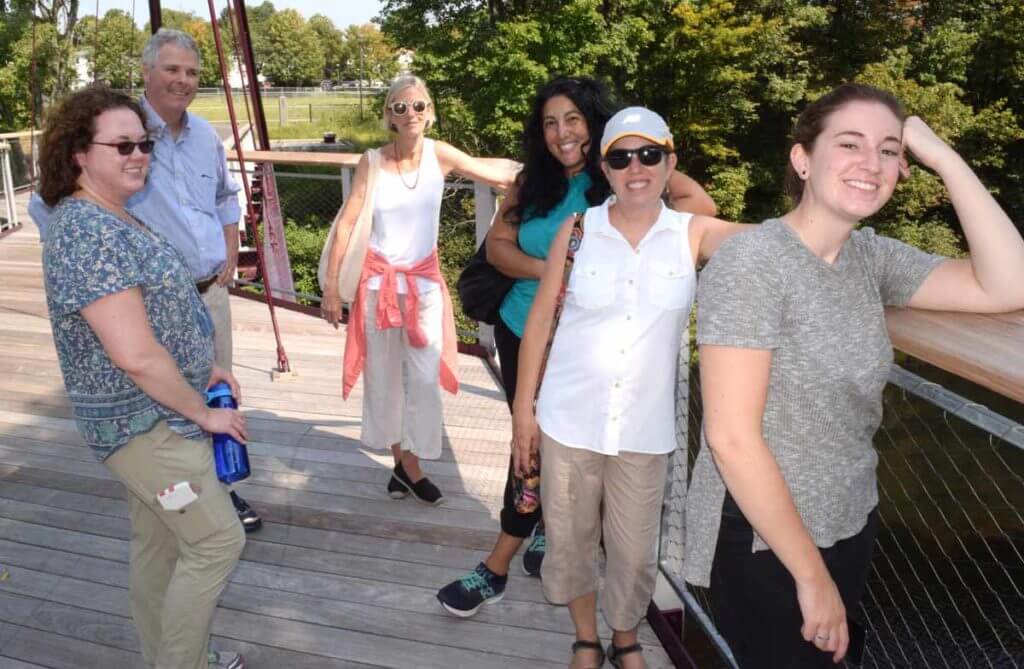 Still on the bridge, with Mattapan’s Ryan Playground at rear. Left to right, that’s Kerry, Ian, Dee, Nancy, Nancy, and Annie–NepRWA’s entire staff except Chris and myself. They had me do a selfie but it was awful. 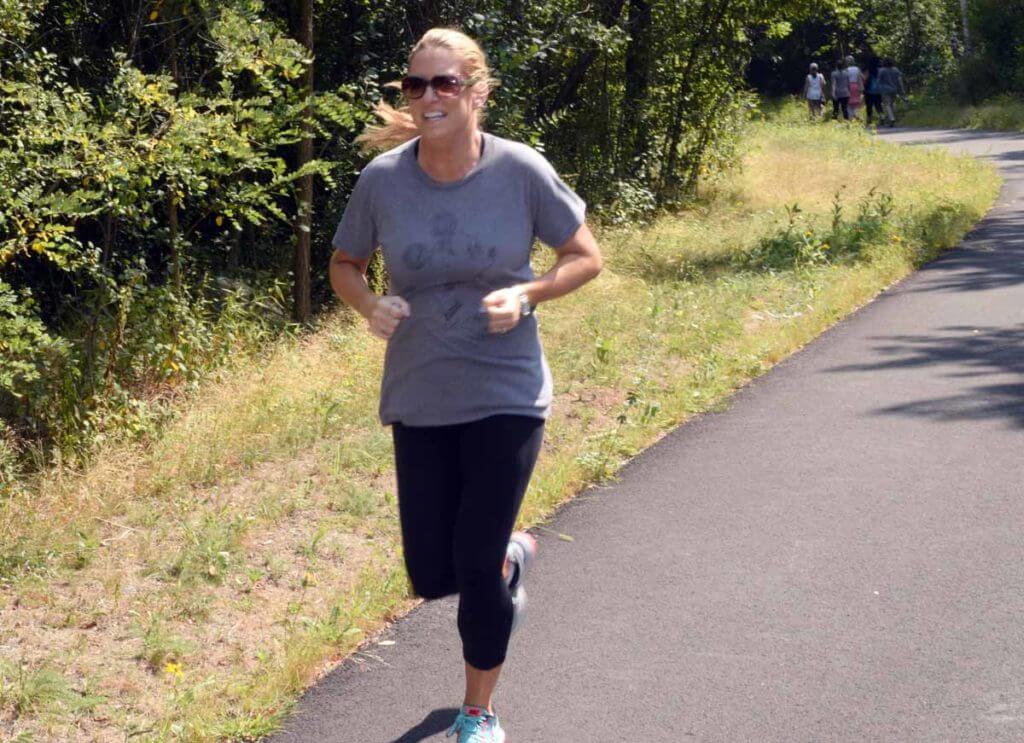 Here the trail continues east on the Milton bank. There was not much traffic on Tues morning but enough that we had to watch for it, especially bikes, which came up quickly. This jogger was keeping to the right. 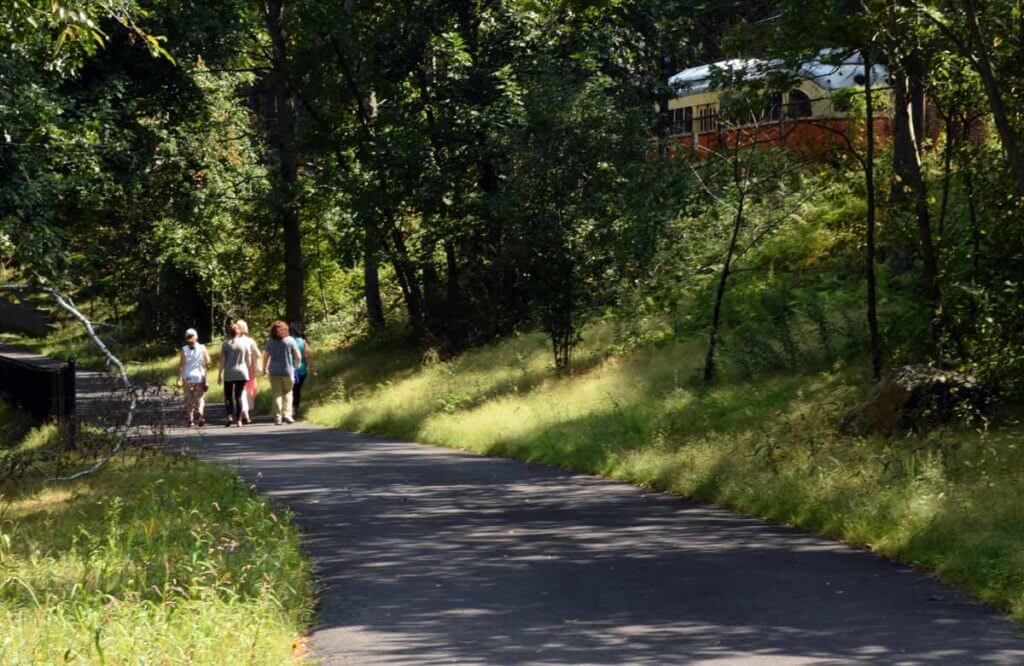 The entire Milton section runs between the MBTA line and the river. Nobody used to come here, although the area has been parkland for over a century. 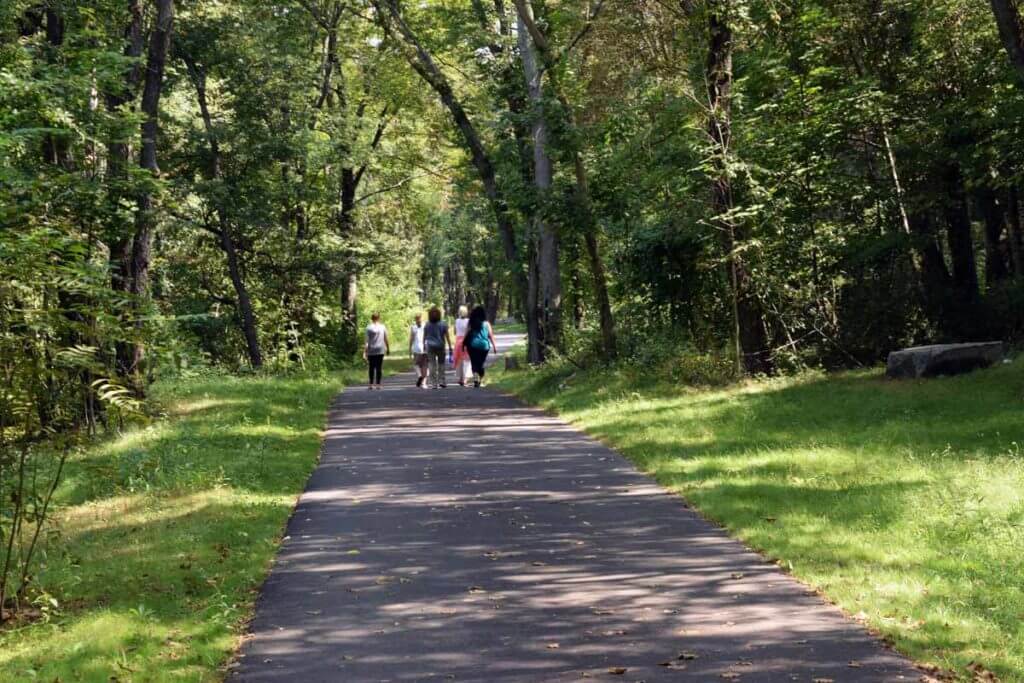 I had a limp and fell behind. The trail edge is loamed and seeded with Agrostis stolonifera, also known as creeping bent. Here’s hoping it takes. 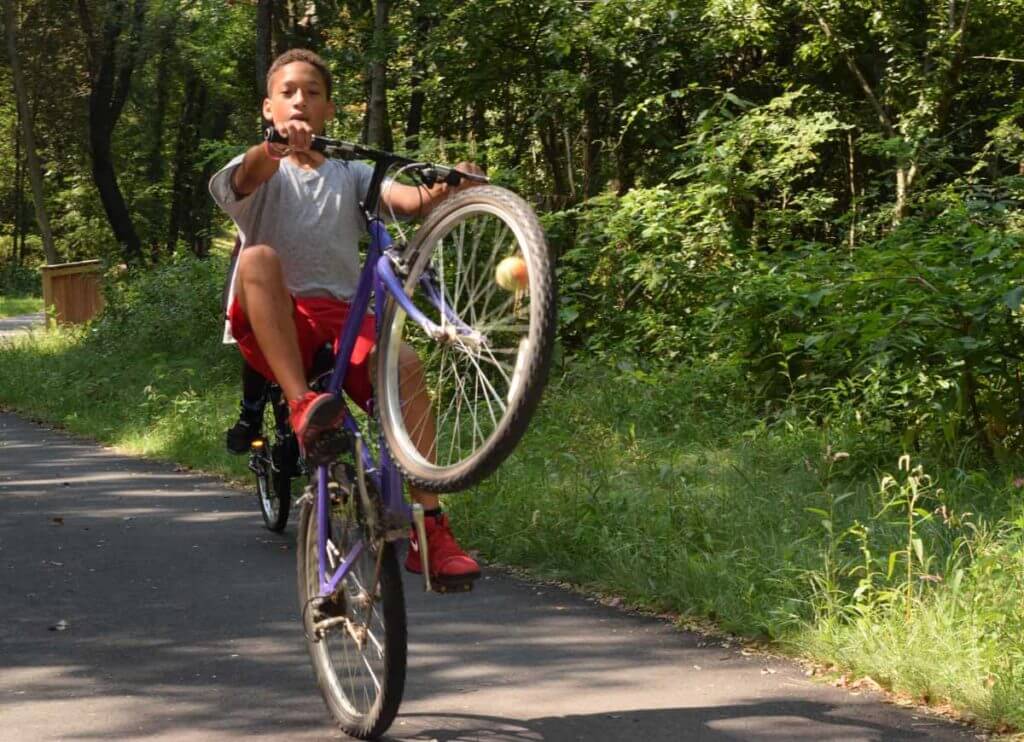 This kid nailed a wheelie. 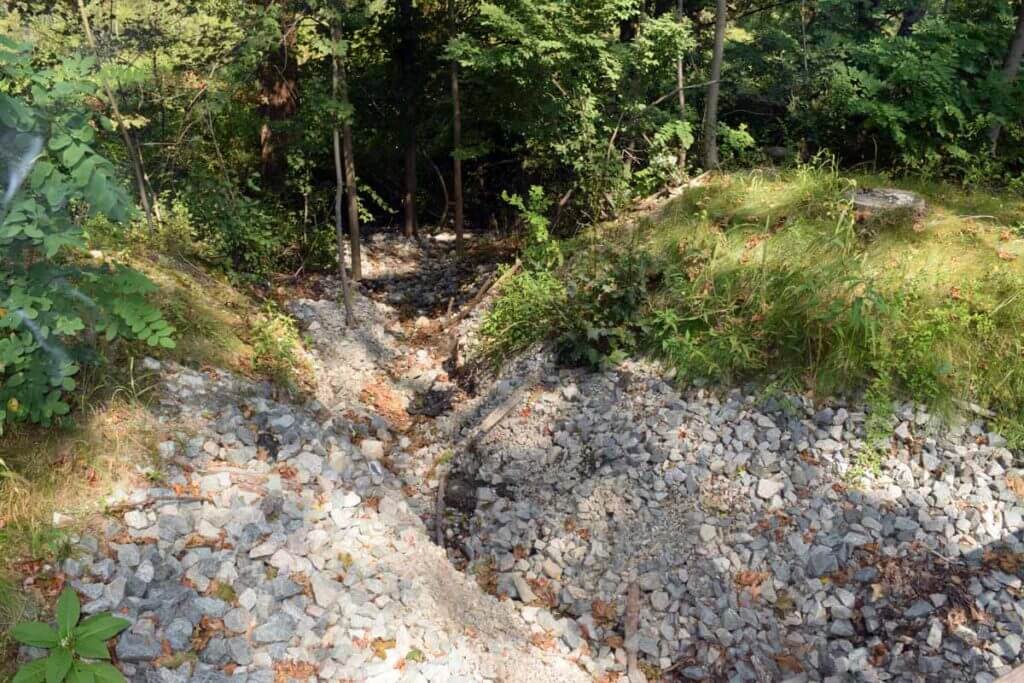 This open swale carries stormwater from Milton’s Eliot St and vicinity. It used to be narrower and was paved at the bottom.  It looks like a downpour blew thru the recently-added cobbles towards the river at rear. 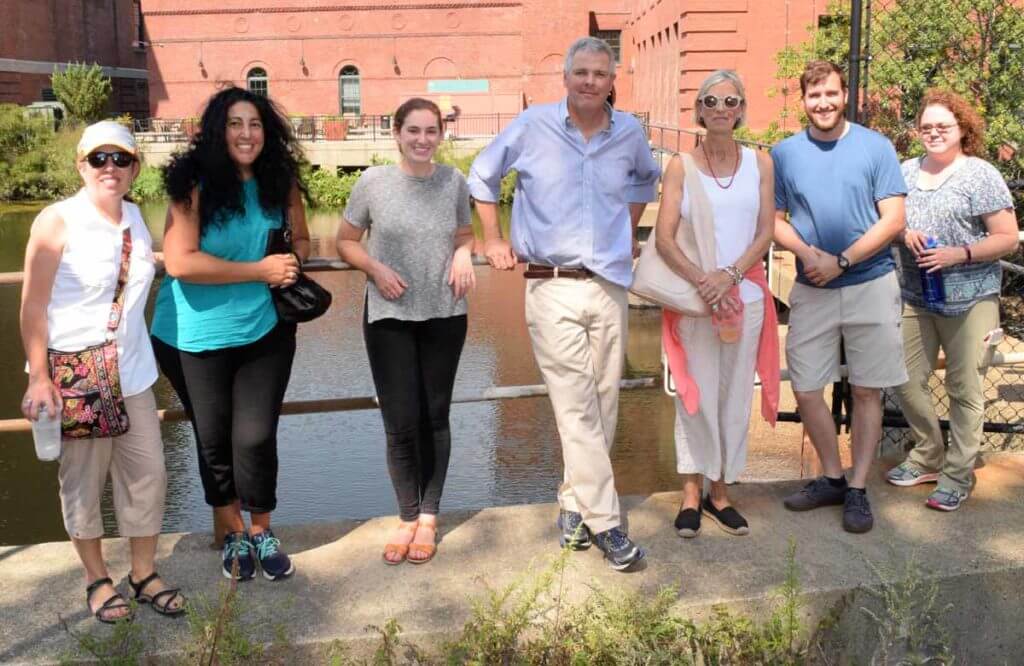 We crossed at Central Avenue to the pre-existing trail and stopped at Baker Dam. That’s Nancy, Nancy, Annie, Ian, Dee, Chris, and Kerry, with I think Dorchester’s Baker Square condos at rear, where I never see anyone sitting. 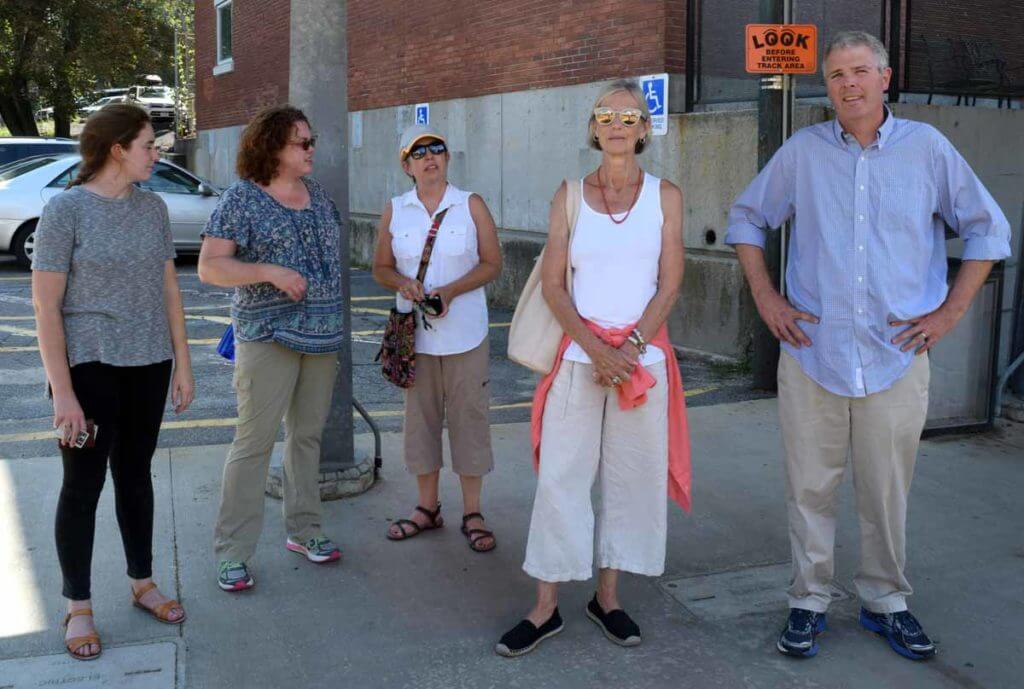 Rather than walk back we decided to take the T. Here we are at the Milton Village stop. 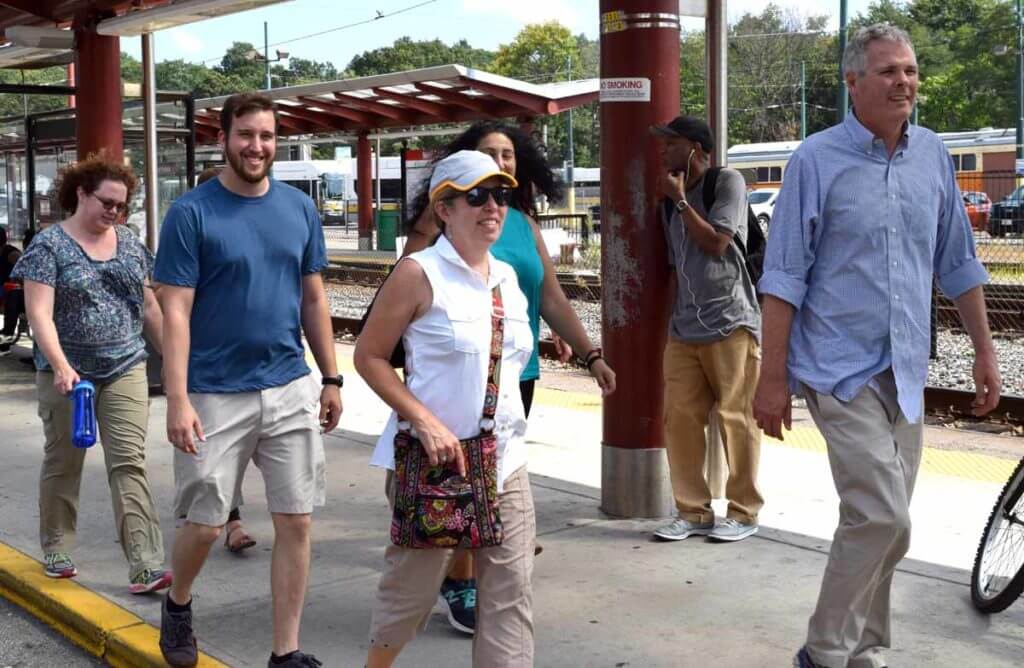 Back at Mattapan Square. 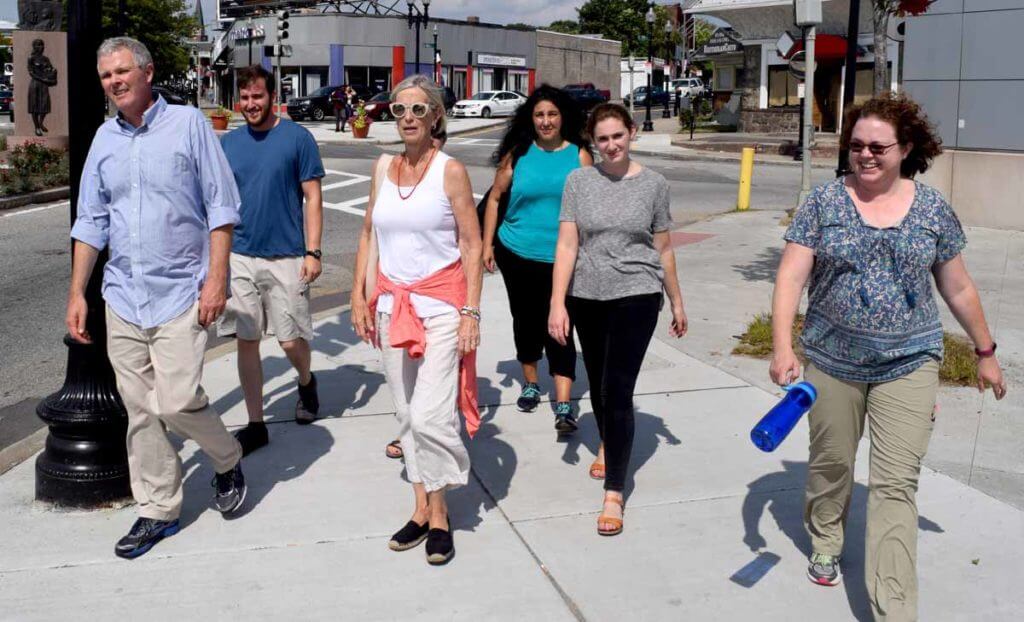 On foot in Mattapan Square. Nancy F. is still there, behind Dee. The new path runs about a mile between here and Central Avenue. Those of us who remember when it was first drawn up about 20 years ago were perhaps a bit skeptical that it would ever get built. Fortunately we were wrong! 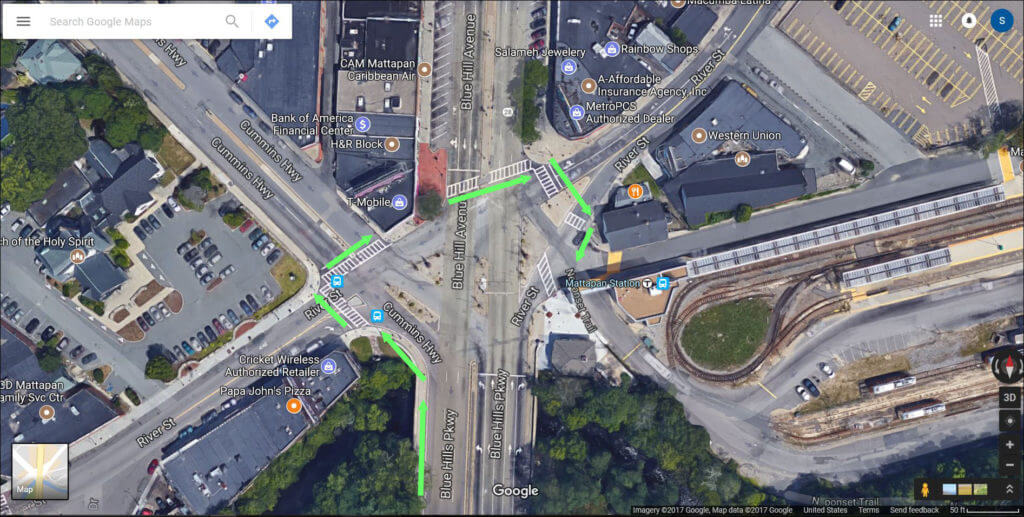 By the way, here’s how we crossed busy Blue Hill Avenue to reach the trail from the continuation on the Milton side, but we returned by the more direct and equally safe route shown below, which crosses the Avenue a bit further into Milton: