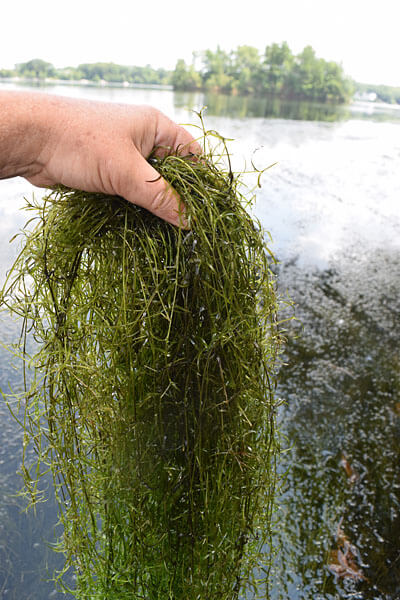 The plant photoed above is bushy pondweed, also known as Najas guadalupensis ssp. olivacea, which was formerly rare and local in eastern Massachusetts,  but is now phenomenonally abundant in a single location, Willett Pond.

Willett Pond is a 220-acre impoundment, mostly in Walpole, but including portions of Westwood and Norwood. NepRWA has owned it for about 15 years, and we give the 80 or so residential abutters the option to license access to it in return for an annual fee. But this year their access is blocked by the weed, which fills the water column entirely around the pond to a depth of about eight feet. Getting through this thicket to the open water beyond is problematic for any swimmer or motorboat. 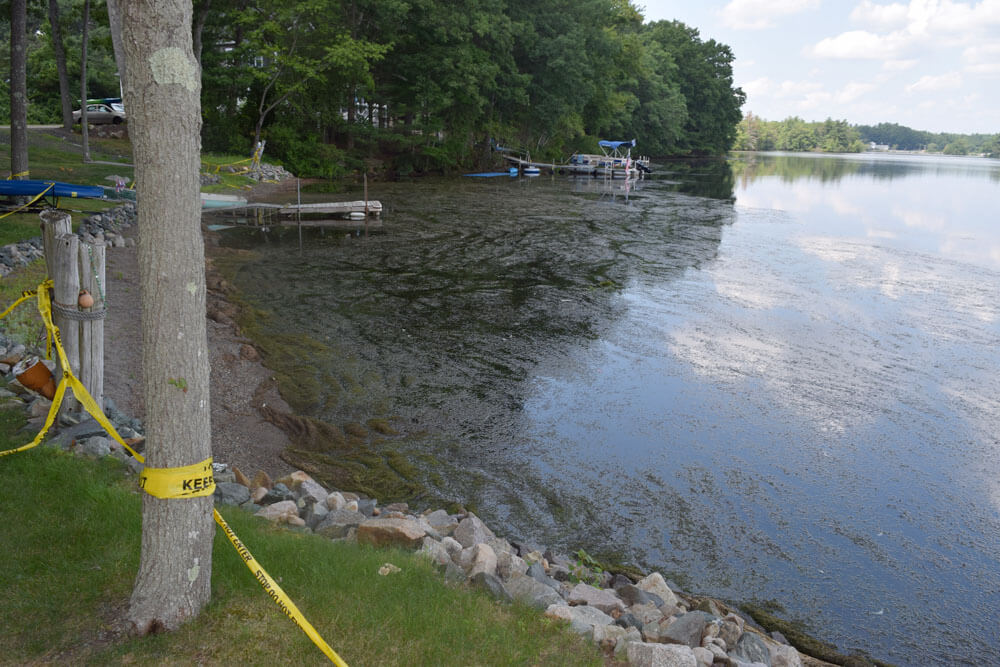 In years past these areas supported rooted aquatic plants, mostly redhead grass and wild celery, but there were spaces between them and there were not more plants than water.

Bushy pondweed is a curious plant. As you can see here, it is native to all the lower 48 states and most Canadian provinces, but is spotty in Massachusetts, having been recorded from only six of its fourteen counties. Though I’ve been botanizing for decades, I first saw it in 2013, when a Willett abutter reported it growing in gravel in about five feet of water in the pond’s northwest corner.  There are few if any reports of it becoming a troublesome weed in New England. 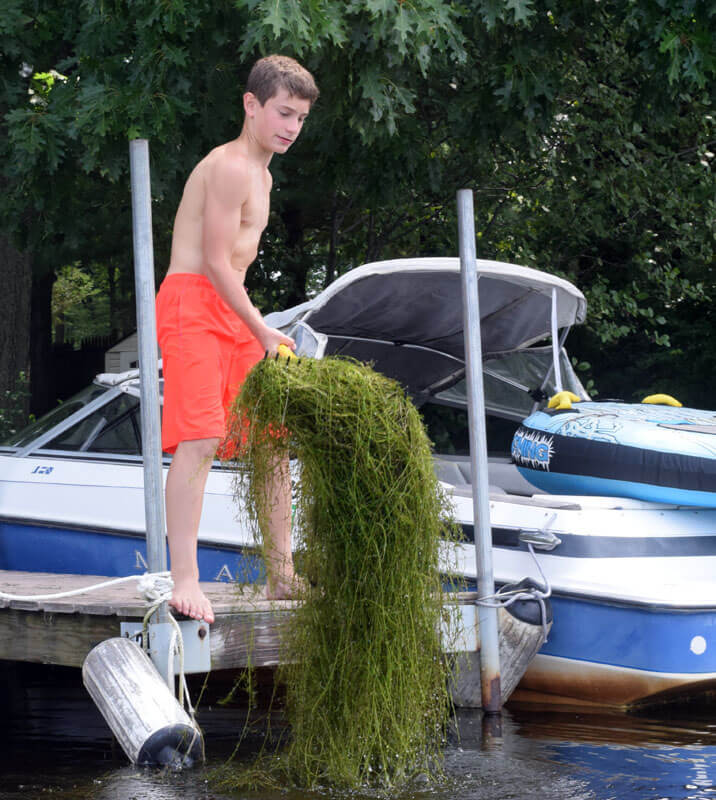 It’s what’s known as a rooted submersed aquatic, meaning that it is attached to the bottom and doesn’t grow out of the water. It is also reportedly an annual, completing its life cycle in one growing season and surviving the winter as a scattering of seeds, seen here as tiny red items maturing in leaf axils: 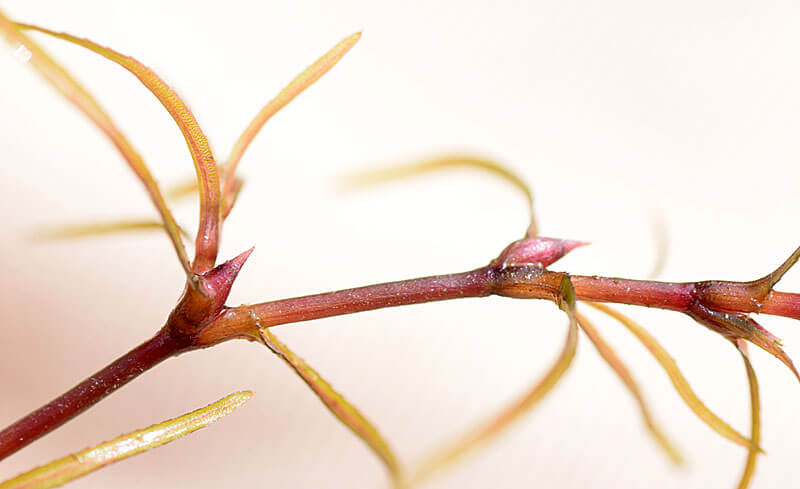 It’s my guess that bits of decaying stems bearing these seeds drifted, driven by winds, all around the pond’s shorelines late last year, sank, and gave rise to the huge existing populations. They may have received a boost, as well, from the extreme drought of July thru September 2016, which exposed normally flooded areas to atmospheric oxygen and allowed the breakdown of accumulated mud and peat to release nutrients, particularly nitrates and phosphates, into the pond-bottom substrates, which is where rooted aquatic plants obtain their sustenance. How else to explain the outrageous density of the weeds today? This year the pond is showing other signs of over-fertilization, such as this accumulation of cyanobacteria at the northeast corner: 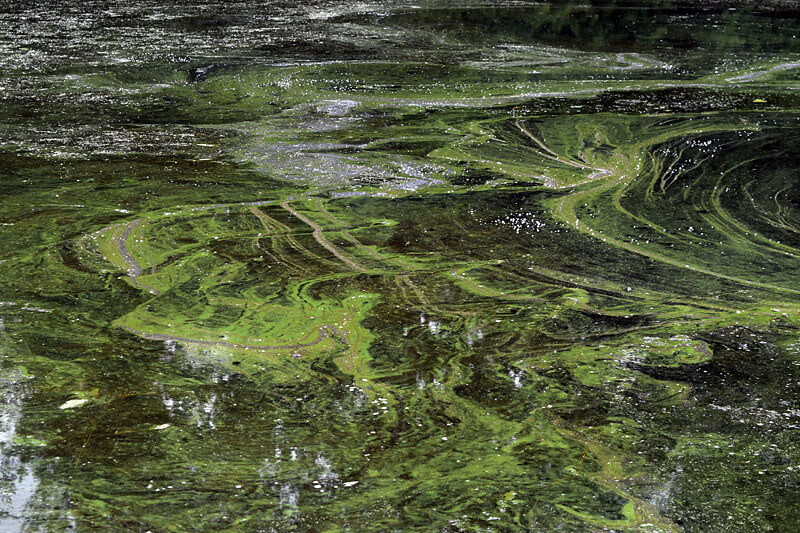 A similar phenomenon occurred this year at Walpole’s Turner’s Pond, which experienced an explosion of featherfoil, a rare native annual never seen there before. It so blanketed the surface that the town resorted to an application of the herbicide Sonar (fluoridone).

It’s still unclear whether Willett’s plague of bushy pondweed is going to be a temporary aberration or a permanent disability. Ultimately the volume and distribution of aquatic plants at Willett depends on a complex interplay of water, nutrients, and light, and in years past the pond’s lightly-developed watershed, large size, and considerable depth have prevented submersed plants from filling the pond. But over-fertilization via lawn chemicals, stormwater runoff, and leaky septic systems is continuing, and very little has been done to mitigate these impacts.  The pond we have today may not be the pond we have tomorrow.