When the leaves turn, it's time to head home.

On a warm Sunday in the last week of October I was sitting beside the outlet dam of a 25-acre marsh at Moose Hill Farm in Sharon when I heard a rustling in the dry bed of the narrow spillway behind me and discovered a three-inch painted turtle making its way through the fallen leaves to the checkboards, which were way too high for it to climb. 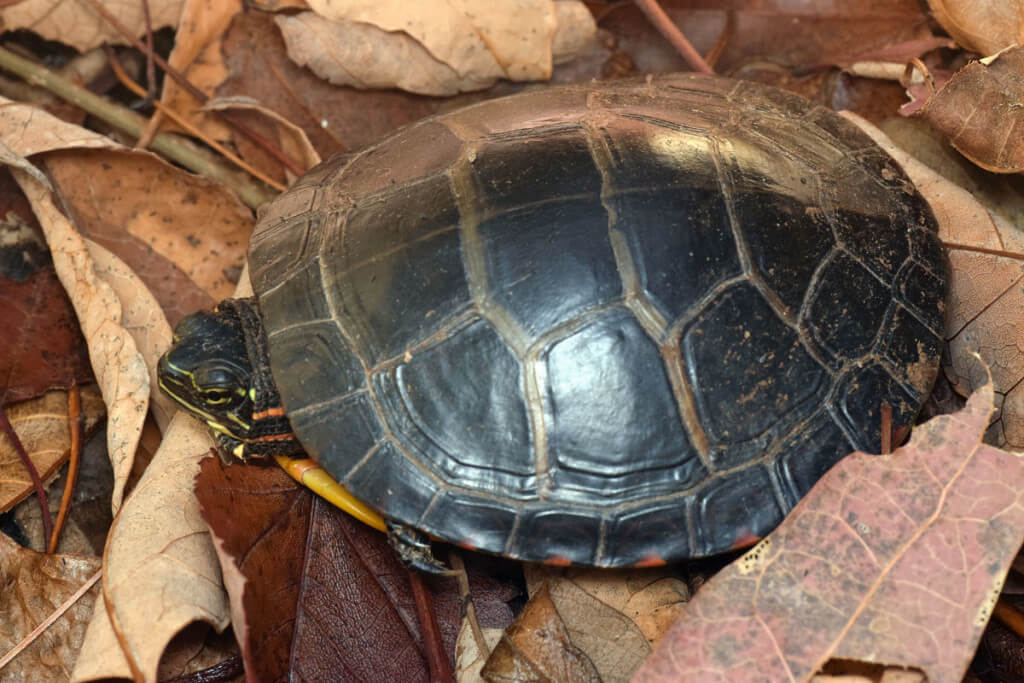 It was headed for the north end of the marsh, normally flooded for much of the year, but now dry except for the single puddle at rear in the photo below, which was about five inches deep (which happens to be the number of inches of rain that fell in Boston in October). 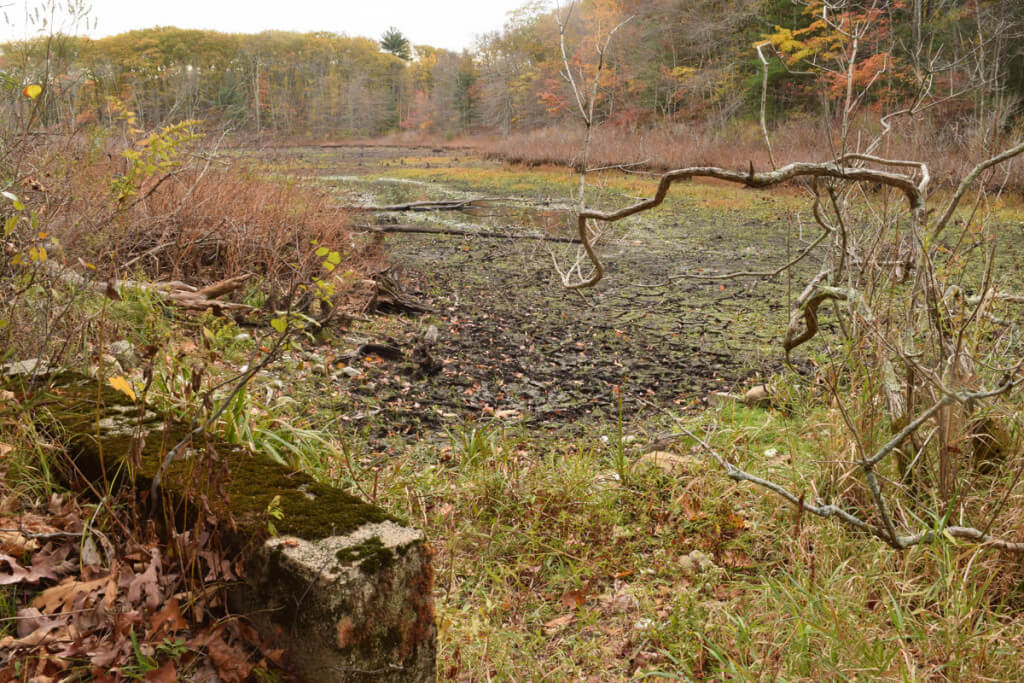 Since the turtle seemed unlikely to find its way out of the spillway anytime soon, I let it go in the puddle in the marsh, which had a few submersed weeds to hide in. It swam around for a bit and seemed pleased to be afloat for the first time in months.

I went back to the dam and was busying myself photoing a bristly gray spider on a pepperbush twig when I heard another dry rustle in the leaves and found another painted turtle, this one half again as large– 4 1/2 inches–and likewise moving from the woods toward the marsh, though it had avoided the spillway. Here’s the two of them compared:

I immediately assumed they were reacting to the fall weather and heading to the marsh to overwinter. Painted turtles are fully aquatic and seldom leave the water except to lay eggs. In our climate they spend the coldest months under the icy ceilings of ponds and streams, where they escape freezing and absorb the little oxygen they need through their skins from the water. They are not completely inactive; sometimes you can see them moving around under black ice.

But most painted turtles don’t have to migrate in the fall; they’re in the same ponds all year, and I wondered where these were coming from. Below is an aerial from May 11, 2016 showing the vicinity of the 25-acre marsh, which lies near the headwaters of Traphole Brook east of Moose Hill. There is no other open water nearby. Evidently the turtles left the marsh when it dried up during the summer-long drought, and were only now returning, water or no water. 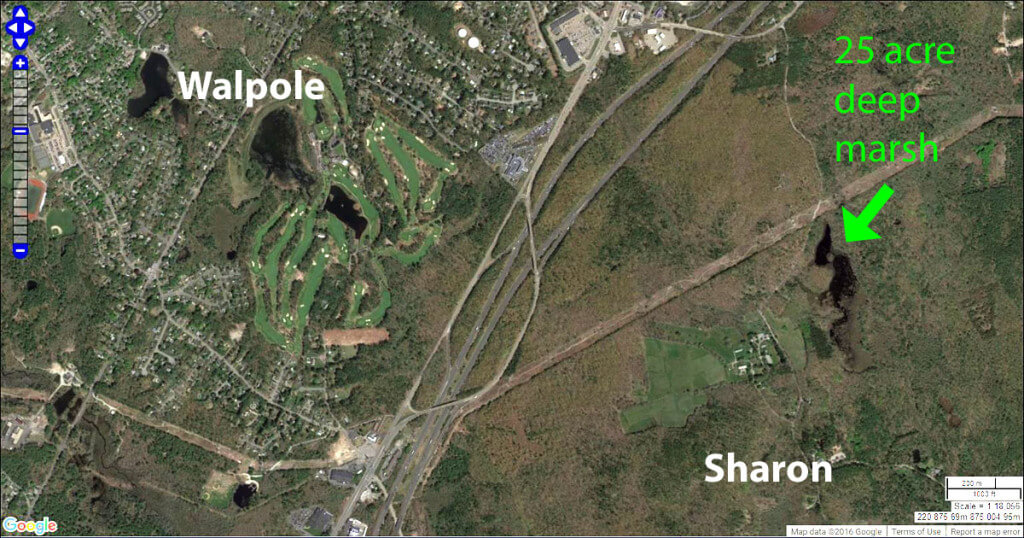 Where had they gone? Here’s another aerial with a wetland overlay indicating that the marsh drains northeast into a large maple swamp. Had they headed that way when the water vanished? They might have found better cover and lower temperatures in the shady swamp, even if there was no standing water. Maybe they had dug themselves into some rooty pockets and waited for rain–a hot-weather strategy known as estivation. 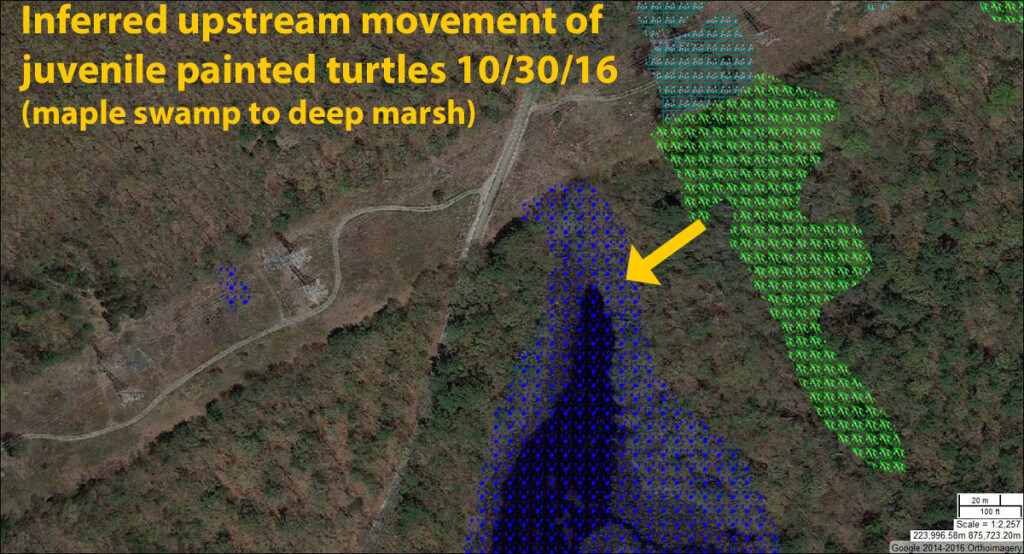 But of course I didn’t really know if the turtles had ever left the marsh–all I knew was that they were heading for it now. But the lack of any other open-water habitat nearby persuaded me that it was indeed their home, and that they had been forced out by the drought. Something similar happened when Goose Pond in Concord dried up this summer, and many of its resident painted turtles were crushed trying to escape across adjacent roads, as reported by herpetologist Bryan Windmiller in the GLOBE.

The 25-acre marsh wasn’t always a marsh. The photo below shows some of the old stumps scattered across its bottom, indicating it was once dry enough to grow trees, and that most were probably drowned when the dam and spillway were built decades ago. Moose Hill Farm is a large (347 acres) conservation property owned by the Trustees of Reservations, and a management plan written in 2007 (pg 55) speculated that warm-water fish like sunfish and bullheads inhabited permanent open water at the center of the marsh. Perhaps they did. I don’t believe there are any there now. 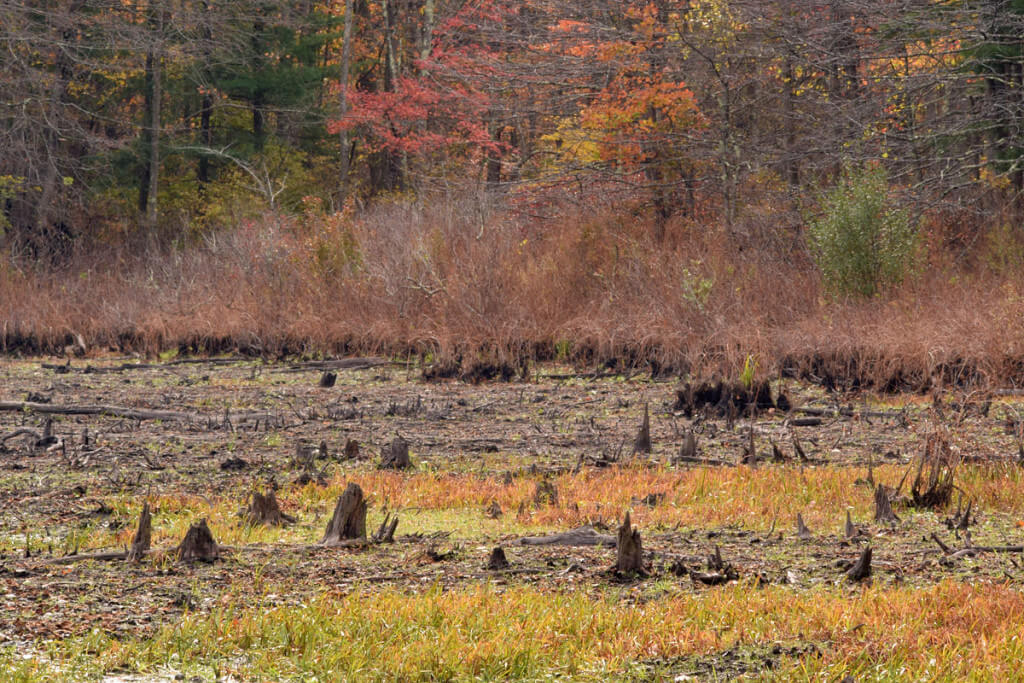