Not hard to find once you look... 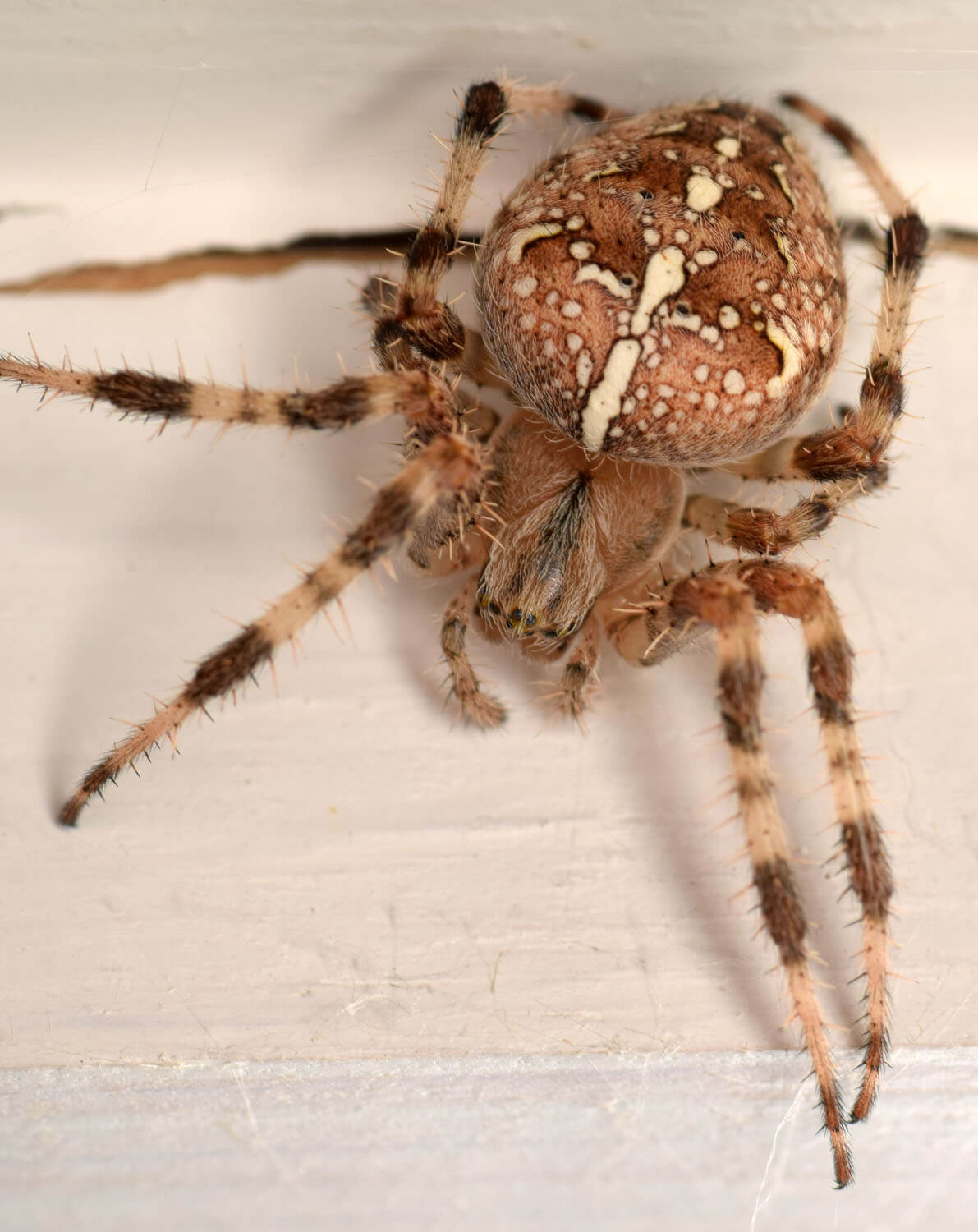 Here’s a 9.2 mm female cross spider I chased into a corner of the window in NepRWA’s kitchen at 2173 Washington St. in Canton in October with my scary lens barrel. She’s also called Araneus diadematus. She’s easily identifiable by the big cross made of cream-colored spots on her abdomen. We would often see her hanging upside down in her web at lunchtime, waiting for an unlucky fly.

October is a good month to find spiders because many of them are born in the spring and spend the whole summer getting fat. Here’s some babies of the same species photoed on May 13 in Pornic, France. 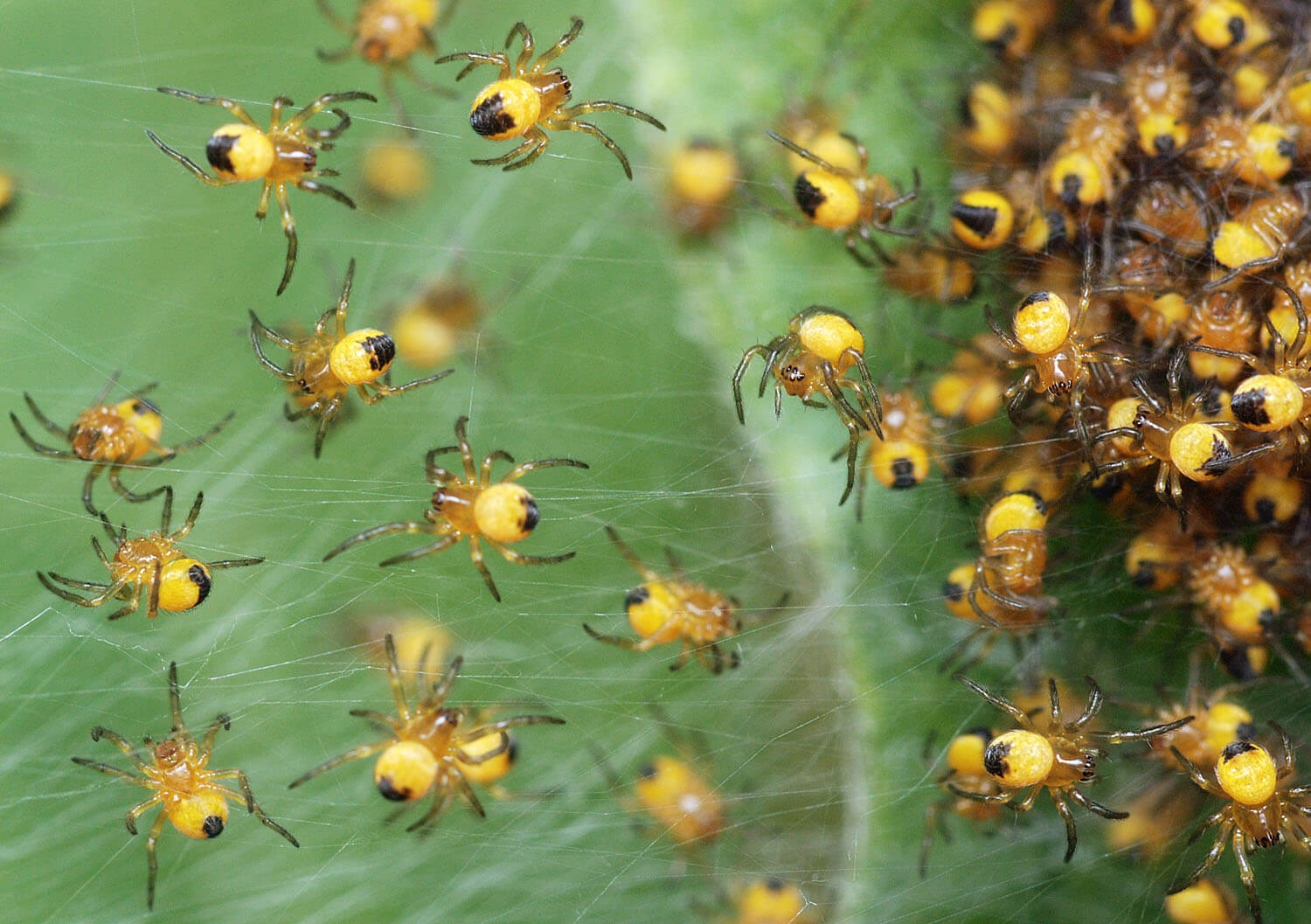 They just hatched from eggs placed in a round, silken bag in a hedge by their mother, who died the previous fall. They soon dispersed to find hideouts of their own, and perhaps a few survived to become parents themselves.

Cross spiders belong to a family of spiders called orb weavers, or Araneidae, because of the big, vertical webs they weave. They’re not typically found indoors. But there are plenty of other spiders that prefer warm, dark corners and may spend their entire lives in houses. Here’s one, for instance, that lives in our cluttered entryway, and that you can probably find in your basement:

This is a female longbodied cellar spider, Pholcus phalangioides, hanging from her web. Originally from western Eurasia, they now occur in basements all over the world. You won’t see them unless you get a flashlight and shine it in the darkest corners. Here’s one that caught a sac spider and wrapped it in silk: 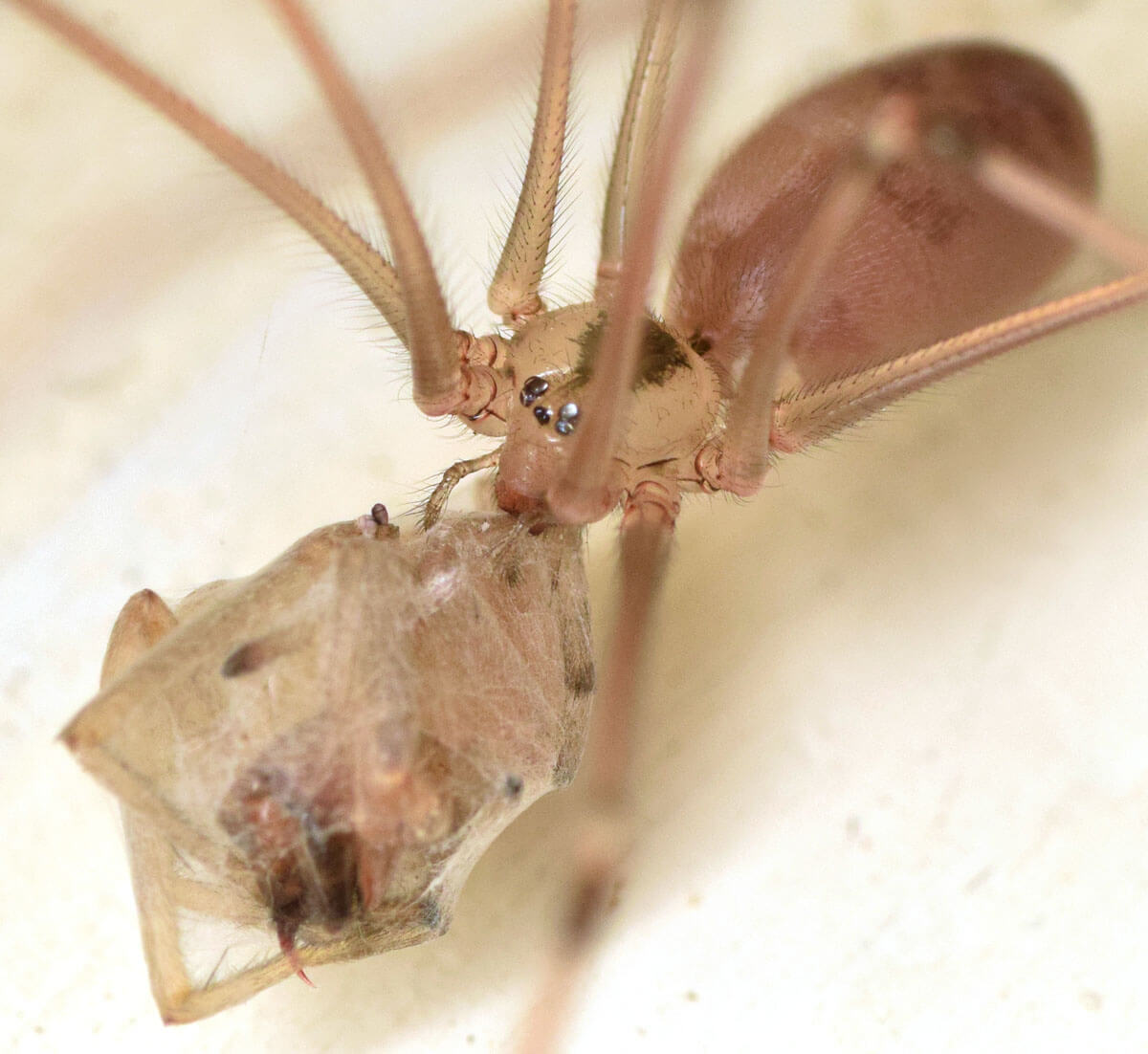 How she avoided getting punctured by those big fangs at lower left, I don’t know. Sac spiders aren’t bashful, and tend to wander; here’s a 5.3 mm male that caught and killed a slightly smaller one on my study wall at home: 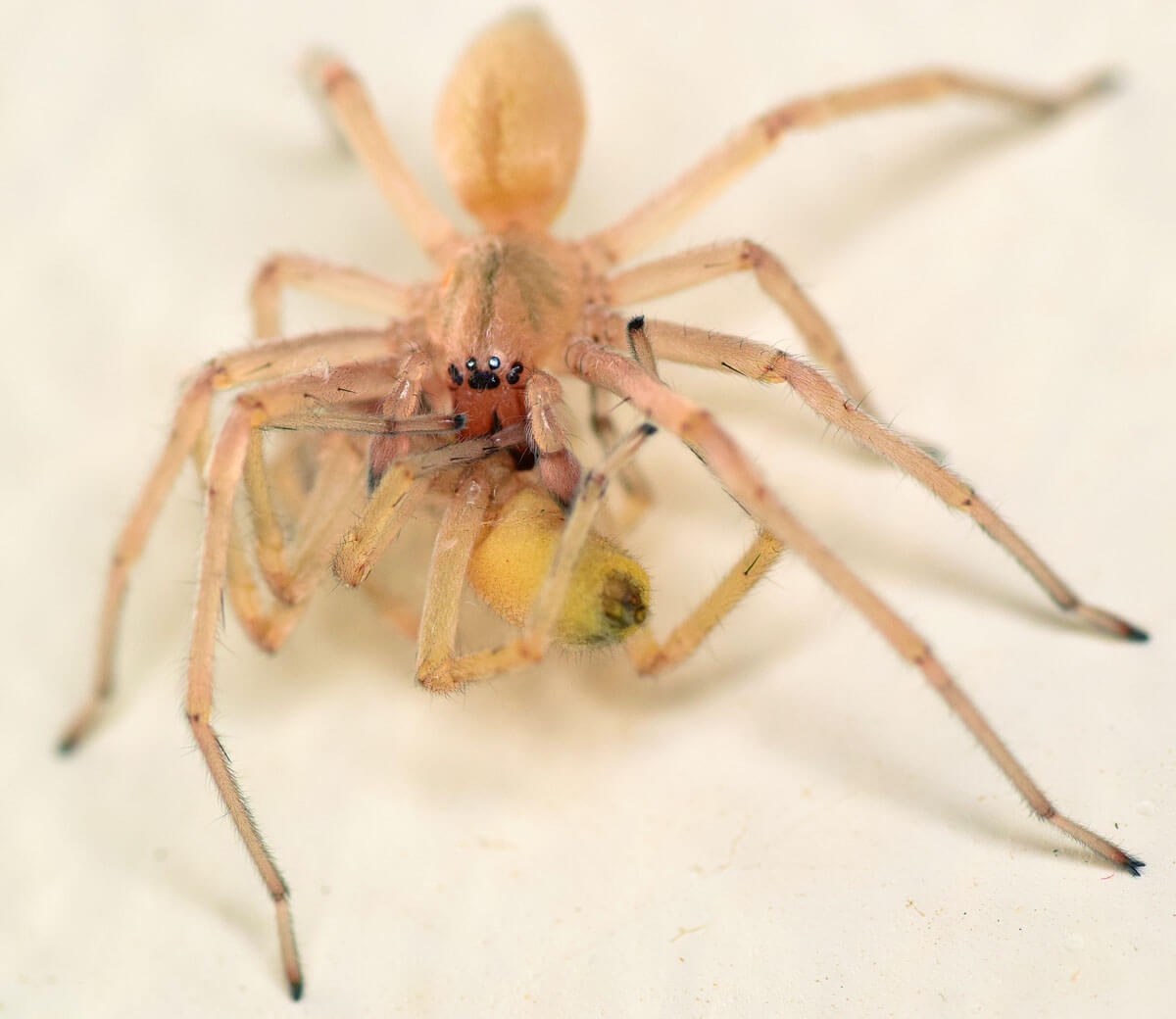 Female sac spiders build see-through egg sacs, like this one I found in an upper corner of my kitchen. It’s empty; did Mom tear it open? 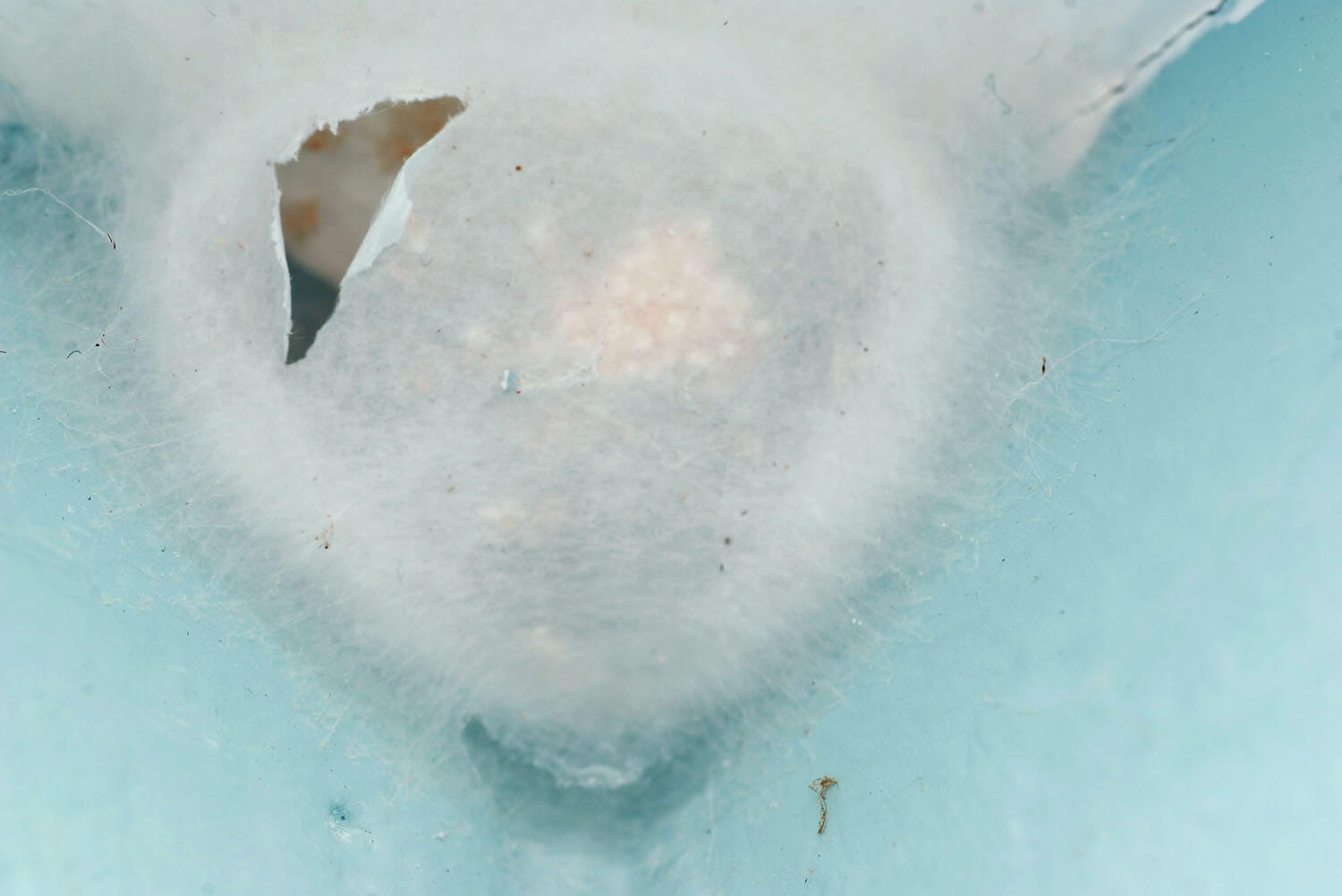 I tore it further to get this close-up of the deflated whitish eggs and the molted skins the babies left behind: 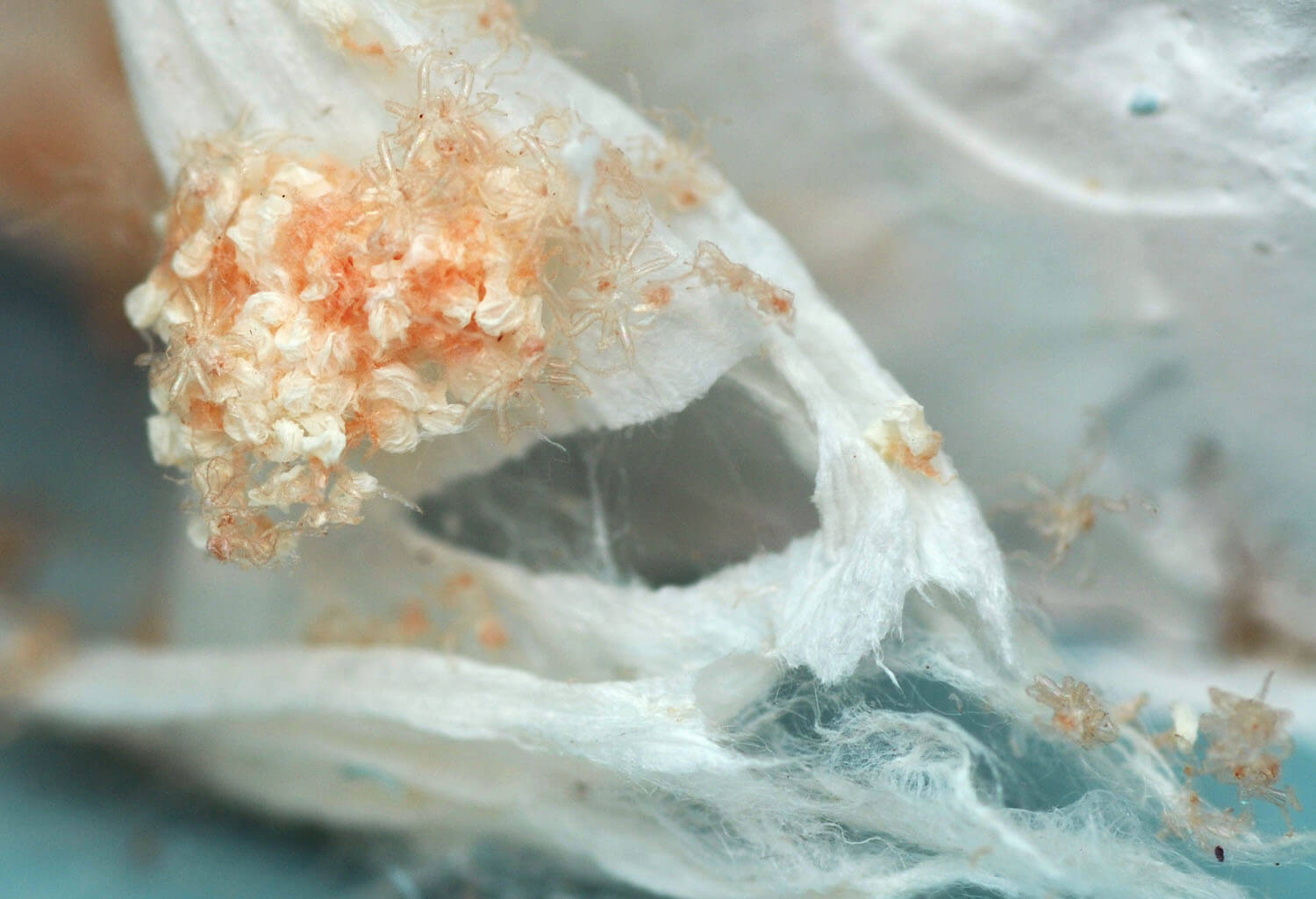 Here’s some different-looking egg sacs spun behind one of Ian’s computer gadgets in our utility room. These are the work of a triangulate cobweb spider, another widespread indoor species belonging to the family Theridiidae, the cobweb spiders, which includes the black widows.

Here again the sacs are torn open and the eggs are deflated and empty; the babies have moved on.  This is a 3.8 mm half-grown male I found in the kitchen at home: 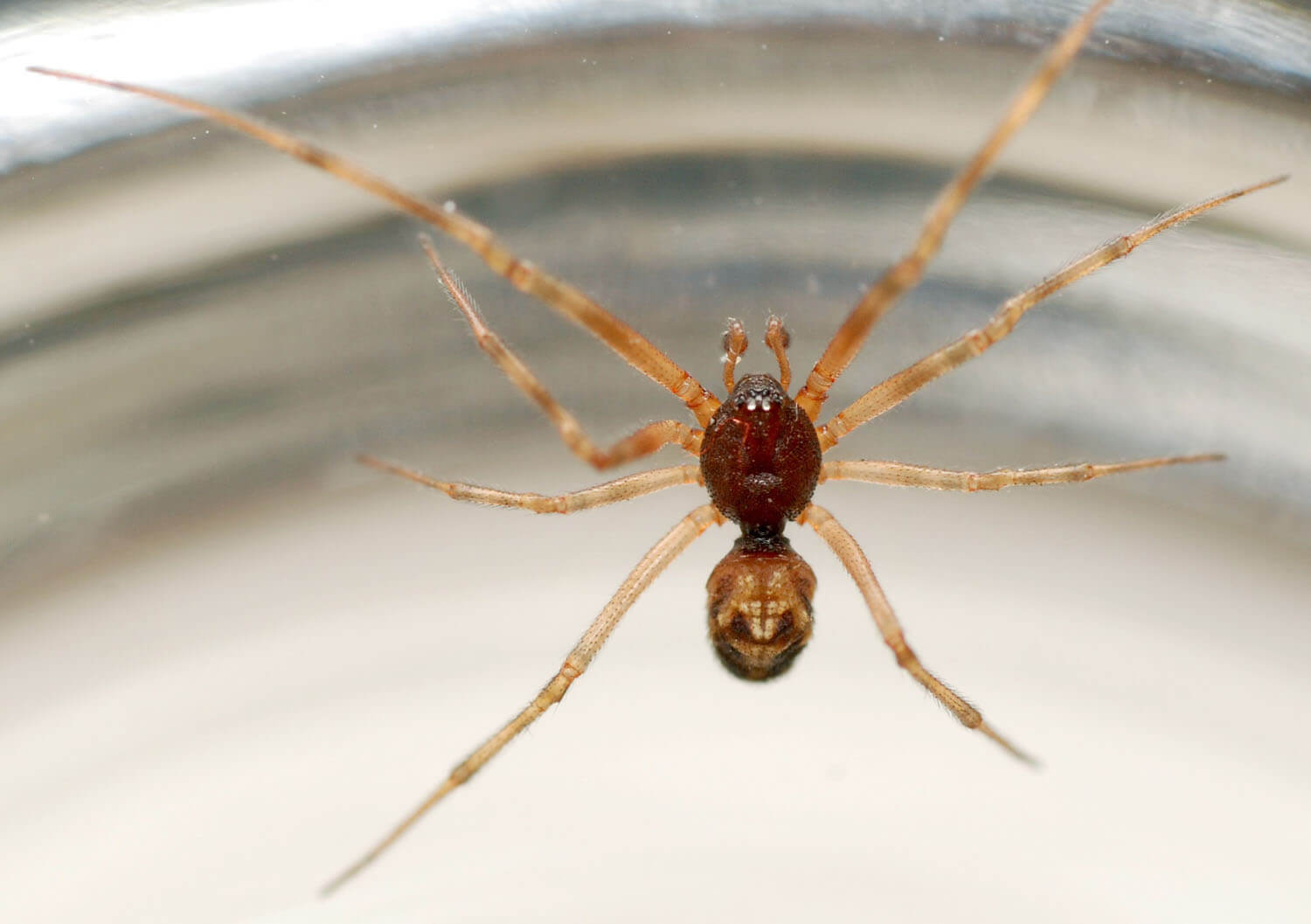 Males are usually easy to ID because they have enlarged palps in front, often compared to boxing gloves. They tend to have smaller abdomens as well, maybe because they spend more time wandering around looking for females than getting fat on flies.  Here’s a 4.8 mm female triangulate cobweb spider in her web with her sac spider victim:

That makes four kinds of spider noted in a quick walk-through of the NepRWA office in October: cross spider, longbodied cellar spider, sac spider, and triangulate cobweb spider. When you consider that they are all predators, and can’t succeed without a steady diet of other bugs, it’s evident that there’s a lot more going on than we are typically aware of.