Work has begun on the 1.3 mile section between Central Avenue in Milton and Mattapan Square

Here’s what I found when I tried to get to my usual water sampling spot at Ryan Playground on the Neponset in Mattapan on July 1st: 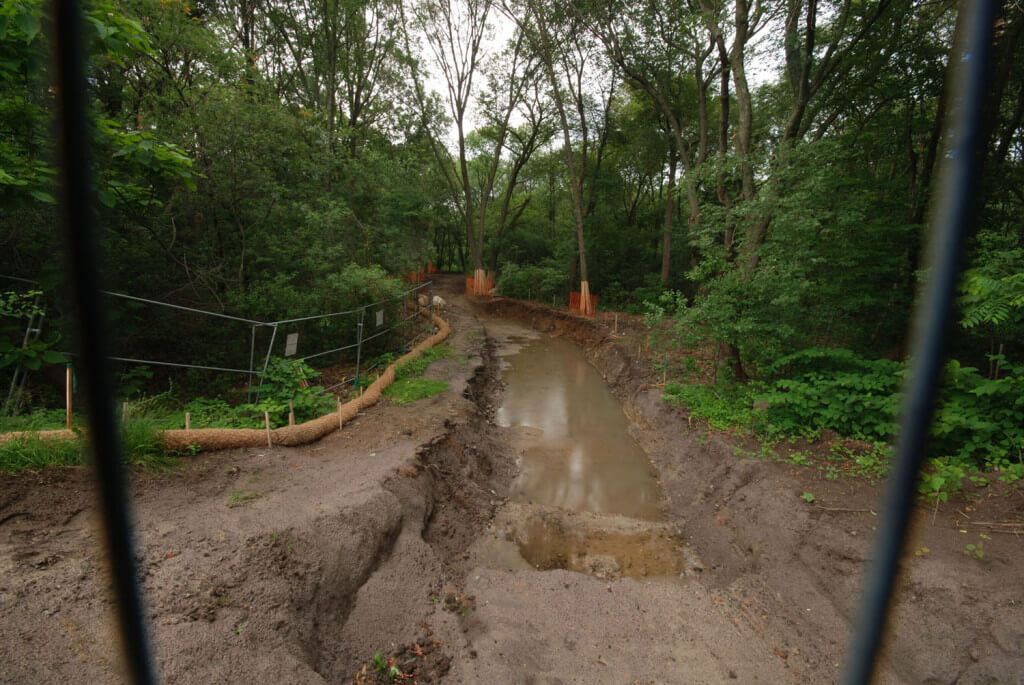 The woodchip path from the parking lot to the river had been dug up and fenced off, and a DCR guy in a truck asked me to stay out.

This wasn’t a complete surprise; at my last date in June, also a wet morning, the path along the river had been cleared, and an excavator clanked by: 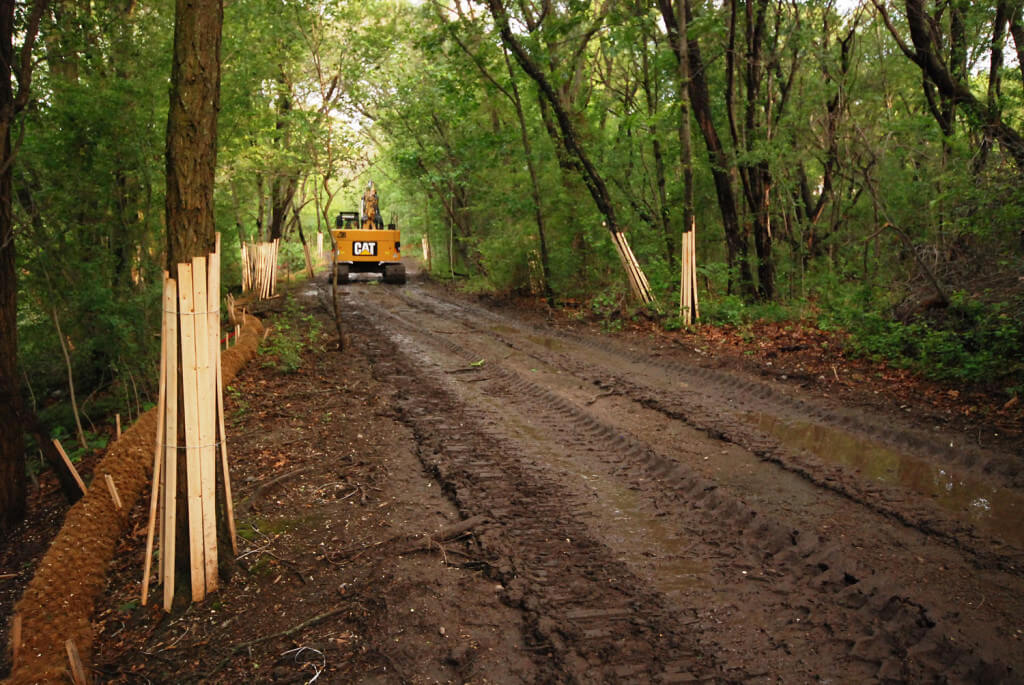 A month earlier, in May, the spot had been staked and flagged: 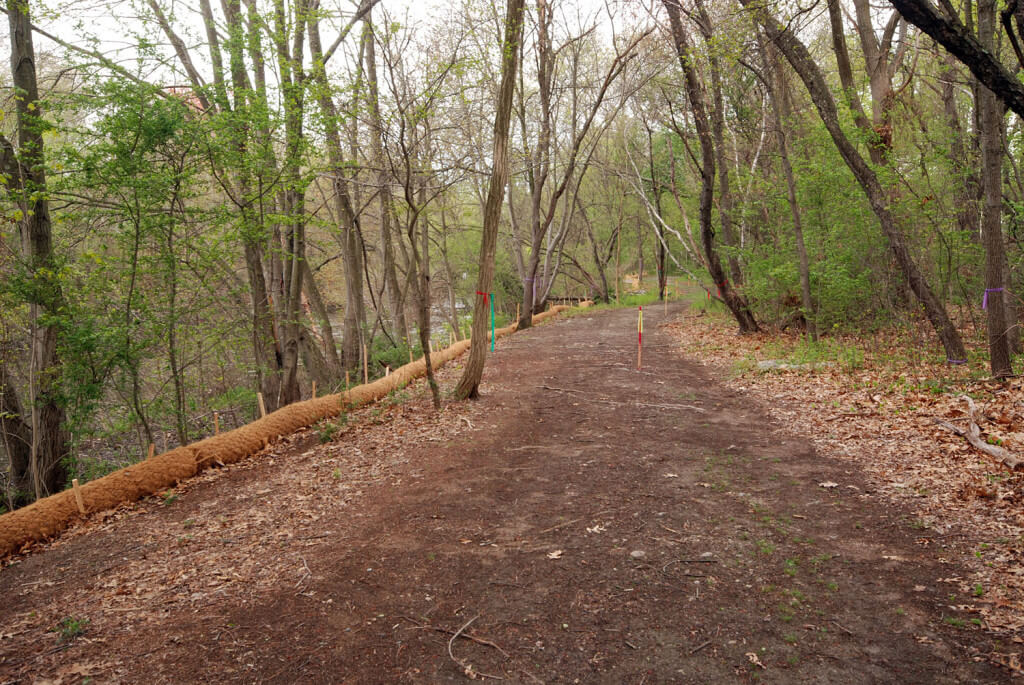 Evidently there was some serious park-making in progress:  the long-awaited 1.3 mile Neponset Greenway connection between Central Avenue in Milton and Mattapan Square, as depicted in February on the former mattress store at the T station entrance on Blue Hill Avenue: 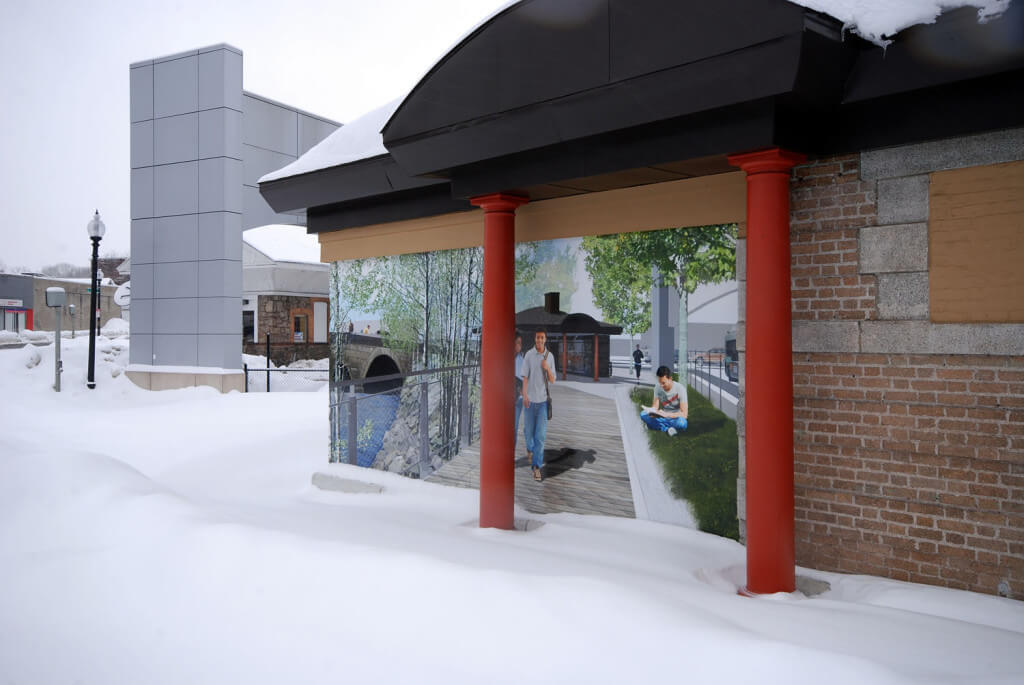 As many readers will know, this stretch languished in the planning stage for years, in part because the river divided urban Mattapan from suburban Milton, and residents on both sides were anxious about new activity in trashy, fenced-off tangles that had been neglected for decades and where practically any traffic was suspicious. It took the success of the downstream section in Milton Village, as well as DCR’s willingness to listen carefully and incorporate neighborhood suggestions, to at last get the work going.

Being particularly curious about the new bridge over the river planned for a site near the halfway point, I bushwhacked in from the Milton side and saw this: 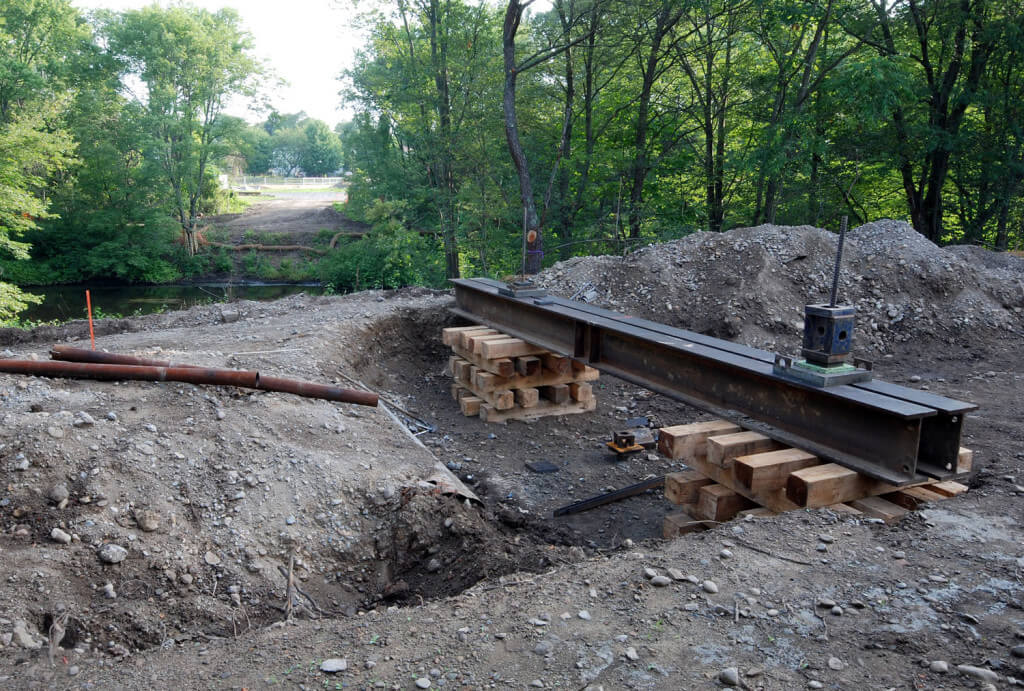 Here the fringing woods have been cut on either bank, and you can see across the channel to Ryan Playground and Southmere St in Mattapan.  According to a DCR drawing the completed span will look like this: 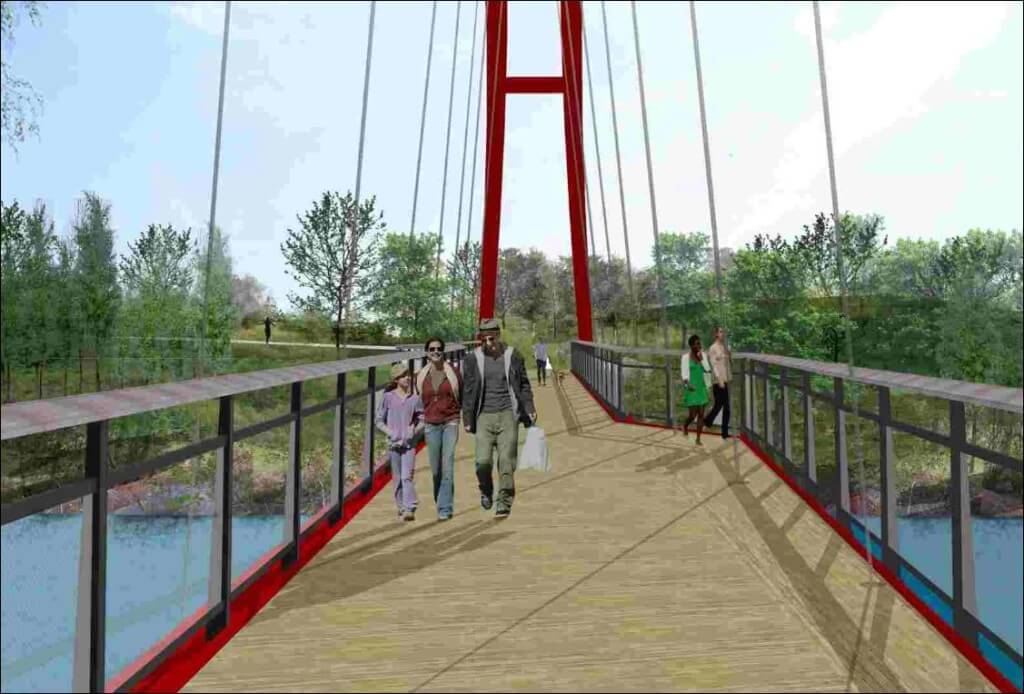 Compare the current view on the Milton bank, looking downstream stream toward Valley Road and the construction entrance on Central Avenue: 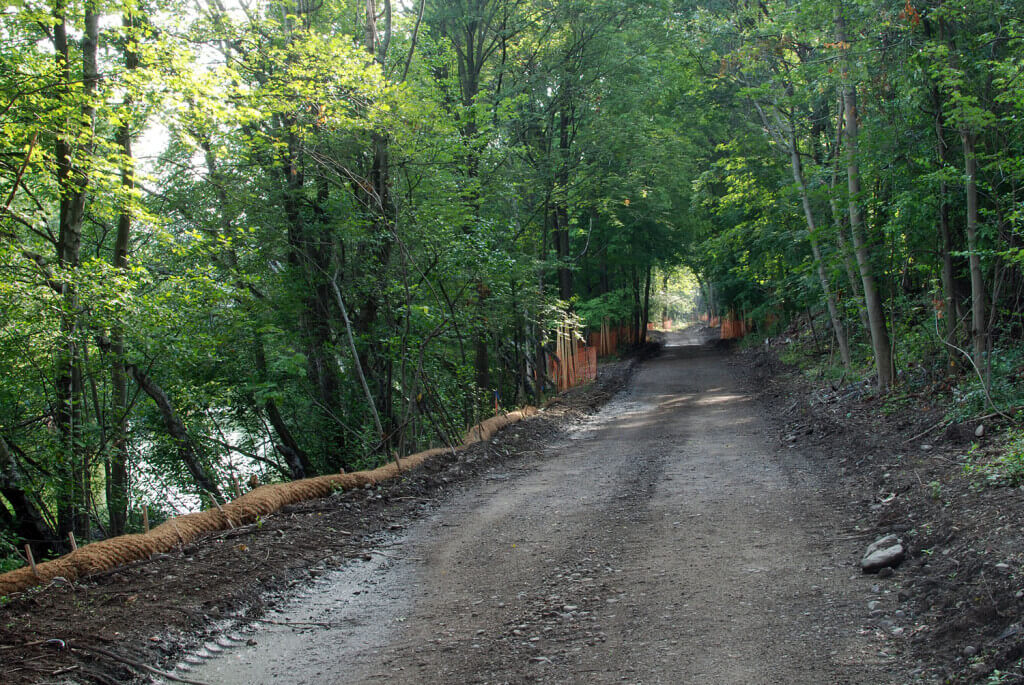 Another bridge is necessary on the Mattapan side to carry the trail over the tracks at the T yard, so that it can continue along the north bank to Blue Hill Avenue. DCR has described it as  a “canopy walk” since it will be fifteen feet high and take users into the treetops: 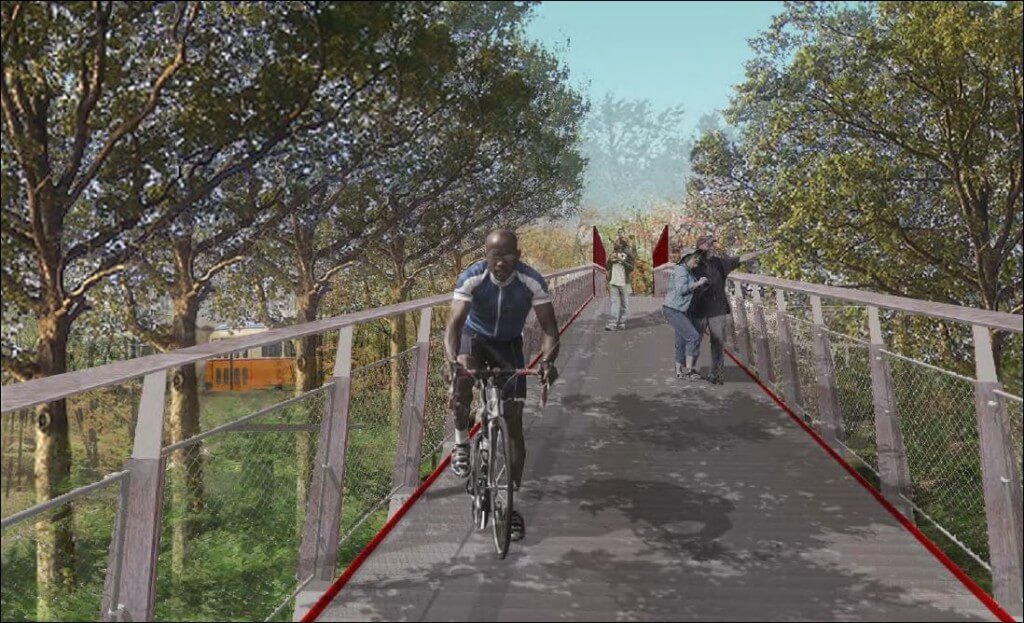 Work has begun on this bridge as well. Here you can see the footings being poured on the north side. The river is at rear, behind the trees: 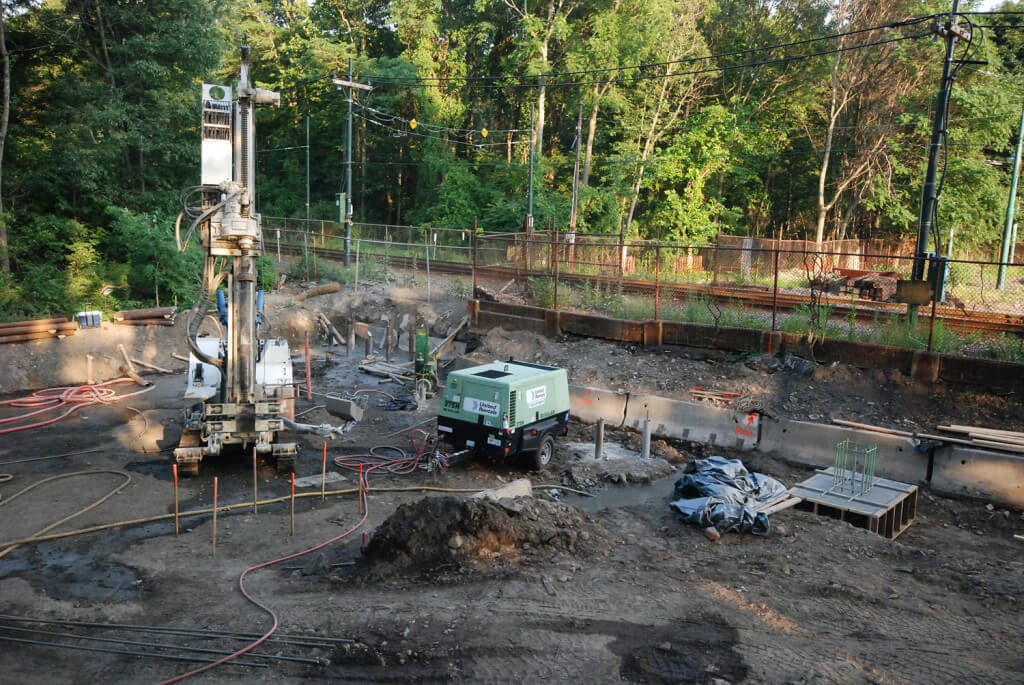 Here’s a DCR sketch with the bridge locations indicated in red:

Construction on the $9 million project is expected to continue until November of next year. It doesn’t seem too long to wait, considering that these parcels were originally acquired with public money in the 1890s.

PS: you can review DCR’s April, 2015 slide show about the project here.

One response to “Photos: construction underway on Neponset Greenway”