After some initial setbacks, our small dams program has regrouped and is now targeting three dams on Pine Tree Brook in Milton. We've also been working on a list of "micro" dams that can be remediated using volunteer crews.

Last spring, the Neponset Watershed Association launched a new “Small Dams Program” with the help of more than 100 local donors, a challenge grant and support from Patagonia and the NLT Foundation. The goal is to begin addressing more than 100 obsolete dams on the Neponset and its tributaries, which collectively take a heavy toll on the health of the river and the fish and wildlife that depend on it. 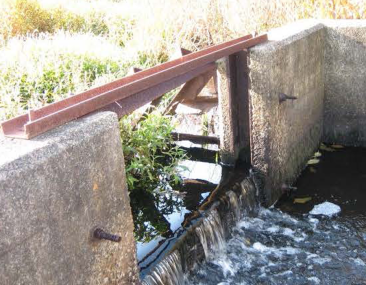 However, just a few months after launching the effort, we were sent back to the drawing board when the two pilot sites we had selected ran into trouble with landowners who were initially supportive but were not ready to move forward in the end.

We have spent the last several months regrouping, and I’m pleased to report that we seem to be back on track with several new possibilities in the pipeline. During the fall we revisited the comprehensive survey of dams across the watershed that we had completed with the help of volunteers a number of years ago, filled in some of the missing pieces, and went through an exercise to prioritize potential restoration sites.

The result is a new focus on three small dams along Pine Tree Brook in Milton. The three dams lie on land owned by the Mass. Department of Conservation and Recreation (DCR) and/or the Town of Milton between Canton Avenue and Unquity Road, near the Ulin Rink. Two are small dams with no modern purpose, and no aesthetic or other public use. The third is the Harland Street flood control dam, which is one of only two flood control dams in the Watershed, but it appears that a minor modification could restore fish passage without impacting flood control operations.

The upper reaches of Pine Tree Brook are believed to support a wild trout population, and restoration at these three sites could potentially be a benefit to this iconic and relatively rare species. Over the longer term, modifications at the Pope’s Pond Dam further downstream could potentially open all of Pine Tree Brook to migratory herring and shad spawning, once fish passage is restored at the Baker Dam. However, work at Pope’s Pond would be considerably more complex and is not part of the immediate project. 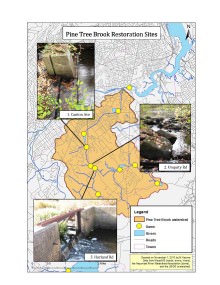 Following site visits with staff from DCR and the Milton DPW, a decision was made to submit these three sites to be considered as “priority projects” with the Division of Ecological Restoration (DER) within the Mass. Department of Fish and Game. Priority project status would officially put these dams on DER’s workplan, opening the way for technical assistance and potentially for additional funding down the road. In the meantime, we are getting ready for a site visit with a panel of volunteer experts representing various technical disciplines from engineering to biology, drawn from the ranks of academia and other interested professionals who live in the Watershed.

We are also working on pulling together a short list of “micro-dams.” These are mostly little more than a few rocks piled in a stream that could easily be disassembled by a small group of volunteers in an afternoon. Even though there isn’t much to these mini structures, they still have a significant impact on stream habitat and aquatic wildlife by fragmenting stream habitats, and trapping fish in small, isolated stream reaches. After doing some permitting work on these mini structures (yes, even things this small still need permits!) we hope to organize some volunteer dam removal parties.

Special thanks to Margaret Kearns of Instar Ecology who has been helping to lead our small dam program over the last few months.

2 responses to “New Small Dam Projects in the Pipeline”