The Milton Mews is a 276-unit apartment  complex proposed on Brush Hill Road in Milton. The project is being brought forward under the 40B affordable housing program, which would exempt it from most normal local zoning and permitting. Unfortunately, the project is located deep inside the Fowl Meadow Area of Critical Environmental Concern in a sensitive wildlife habitat. This has prompted the Watershed Association to take the unusual step of opposing the development in its entirety. On March 21, longtime Watershed Association Board Member, Taber Keally, testified before the Milton Board of Selectmen, urging them to oppose the project. Below are the talking points from his testimony… 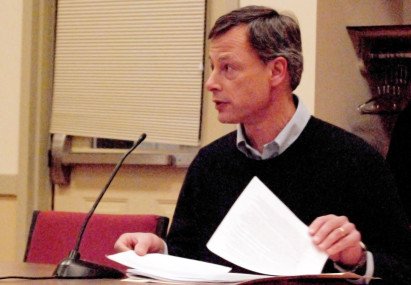 Taber Keally testifies in opposition to the Milton Mews 40b project at Board of Selectmen’s hearing.

NEPONSET RIVER WATERSHED ASSOCIATION OPPOSES BRUSH HILL ROAD DEVELOPMENT
We have been working to protect the Neponset River and surrounding watershed lands since 1968. Our involvement in Milton includes working in the schools to educate our children and monitoring river health through our water sampling program. We sample river cleanliness at 41 locations throughout the watershed; eight of these sampling sites are in Milton.

The Neponset has come a long way from its days as a severely polluted industrial river. In fact, most streams in the Neponset River system meet swimmable standards during dry weather.