The Town of Norwood was hit with an intense downpour on June 28 from a concentrated thunderstorm. 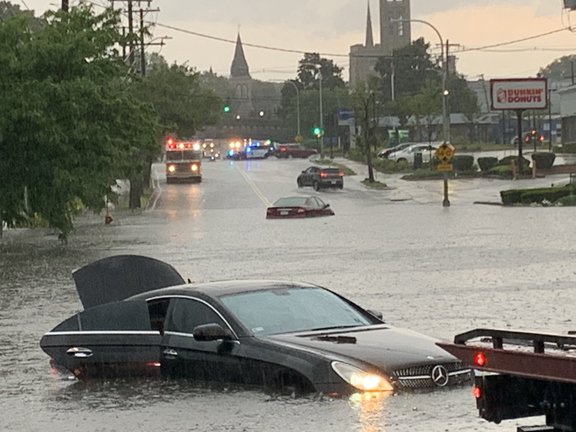 The storm generated extraordinary images on social media, wreaked havoc in downtown Norwood, and foreshadows the kind of events that will become much more common as ongoing climate change pushes our weather to even greater extremes in the coming decades.

The flooding was not caused by the river rising and overflowing its banks, in fact, the river itself didn’t flood severely because the rainfall was over such a small area. Rather, the problem was an intense downpour over an urbanized area with lots of pavement—often referred to as “street flooding” or “nuisance flooding.” 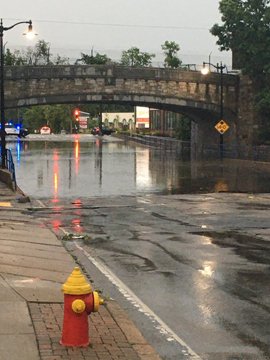 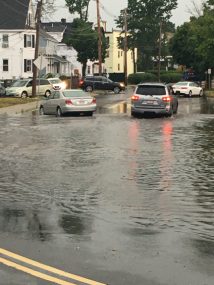 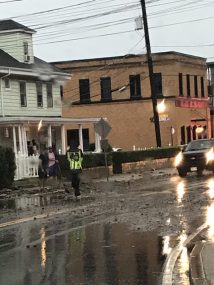 Unable to soak into the ground, the water overwhelmed manmade storm drain inlets and pipes. With the storm drains unable to carry the water away fast enough, there was nowhere for the rain to go but overland and into buildings. The Norwood Hospital was especially hard hit and will likely be closed for months, not to mention many other homes and businesses.

According to local observer Joe DelliCarpini the storm dropped 4.47 inches of rain over 24 hours, which sounds like a lot, but is not that unusual in our area. That much rain in a day has about a 20% chance of occurring each year (AKA a “5-year” precipitation event) in Norwood based on the latest federal rainfall “precipitation frequency” tables for Norwood.

Drivers on Route 1 in Norwood were lucky to make it through the floodwaters.

If that rain had fallen evenly over 24 hours, there likely would have been few problems, but records from the rain gauge at the Norwood Airport show 2.7” of that total fell in just 60 minutes. This peak rainfall rate has only about a 1% chance of hitting Norwood in any given year, making it the so-called “100-year storm,” and the airport likely wasn’t at the center of the storm.

New England has already seen a 71% increase in very heavy precipitation events since the 1960s, more than any other region of the country, with more change to come. To help prevent this sort of catastrophic damage in the future we need to do two things:

Bend the Curve on Emissions

A significant amount of climate change is already unavoidable, but we still have the chance to determine how bad things will get, by taking strong steps to rein in emissions. If we don’t act on emissions, the recent rain event in Norwood will begin to look like the “good old days” in a few decades.

We need to rethink the way we currently build communities and manage rainwater, by moving toward “green infrastructure” solutions that help to absorb, slow down, and store floodwaters to make our communities more resilient to intense downpours.

It’s a big change that will require strong leadership from cities and towns, state agencies, and private developers. But using these approaches, development and redevelopment projects can make flooding problems better instead of worse and at the same time protect our drinking water supplies, clean up our waterways, and make our neighborhoods more attractive.

Many communities in the Neponset Watershed, including Norwood, are already collaborating with us to start making these kinds of changes, but we still have a very long way to go, and municipal leaders will need strong support from local residents to adopt strong policies and make needed investments over the next few years.