Recent development in Boston beside the Tileston and Hollingsworth Dam has made it more visible but no less problematic. 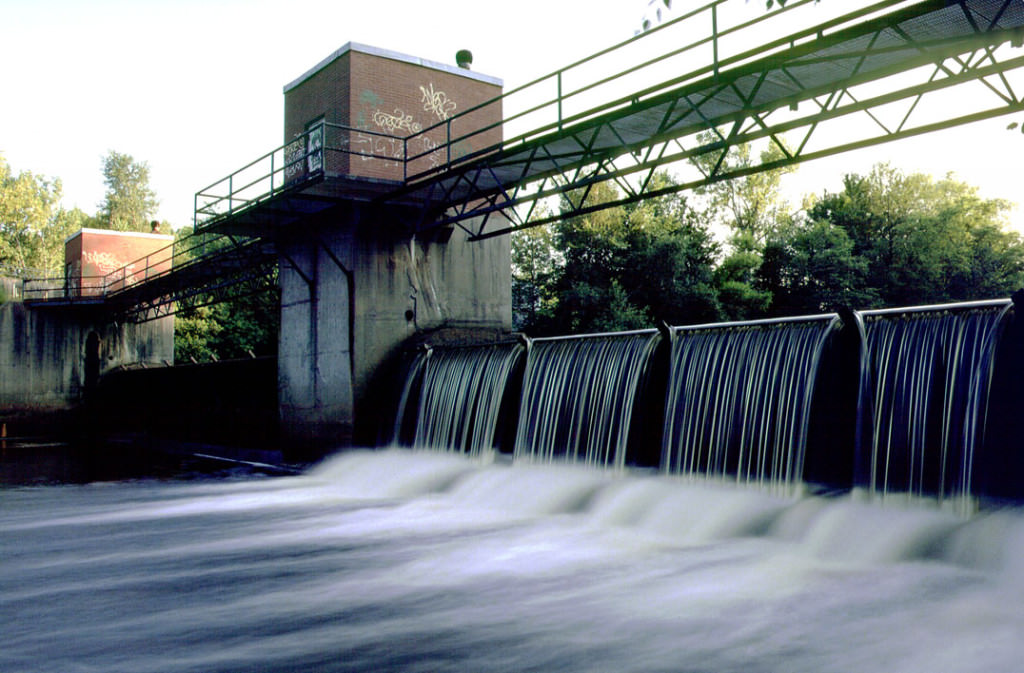 If you’ve canoed the lower river, you know about the Tileston and Hollingsworth Dam–a formidable roadblock on the Milton/Hyde Park line at the former Bay State Paper complex, where the river falls about six feet over a concrete wall divided into two parts, each topped by a sort of adjustable drawbridge called a bascule that can be raised and lowered to fine-tune the rate of flow. You also know that the only way past the dam is a lengthy carry around the derelict mill buildings on the Milton bank, a twisting route often blocked by chainlink fences and barbed wire. 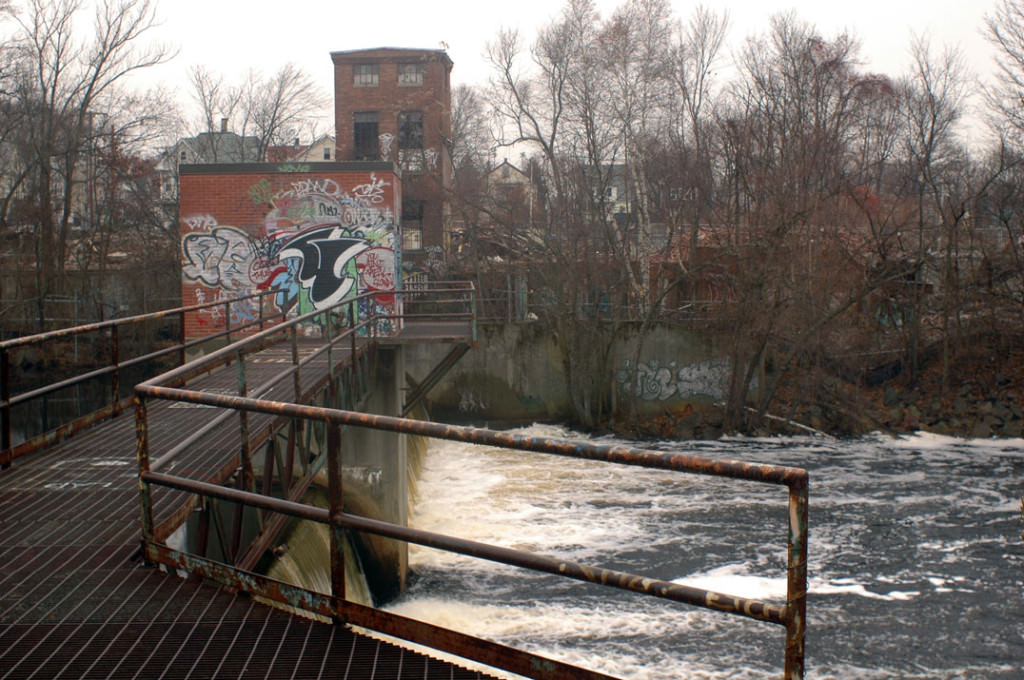 Tileston and Hollingsworth Dam from Milton bank 11/30/08. The mill at rear has just been demolished. Homes at rear are on far side River St, Hyde Park.

But the Milton option was the only one, since the Hyde Park bank was completely bricked in by the massive mill complex, and you couldn’t even walk the narrow wedge of rubbly fill at the water’s edge, much less drag a canoe over it. 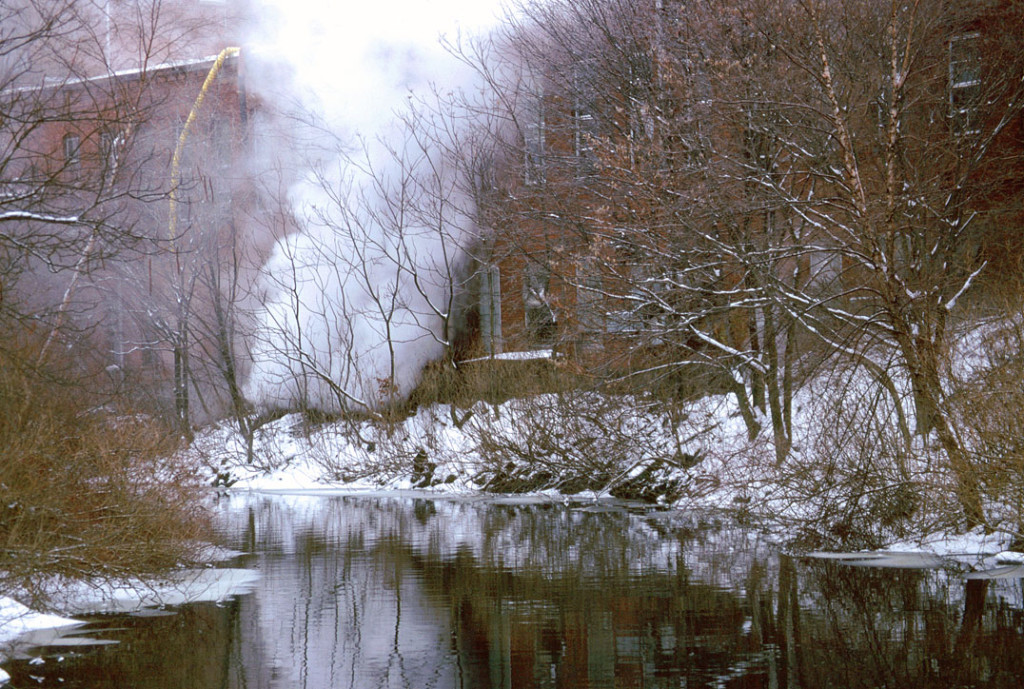 I live not far from the dam in Milton, and from time to time I wander in from Truman Highway, under the railroad and around the perforated sheds and roofless tanks, if only to see if it’s still do-able. And it is probably not news to many of you that the view across the river has been completely transformed; nearly all the mill buildings on the Hyde Park side have been knocked down and hauled away, and the resulting vacancy, renamed The Shops at Riverwood, has a brand new PriceRite supermarket and Sovereign Bank down at the far end. The $30 million project is being built by the Finard Properties of Burlington with $5 million in financing from the city. 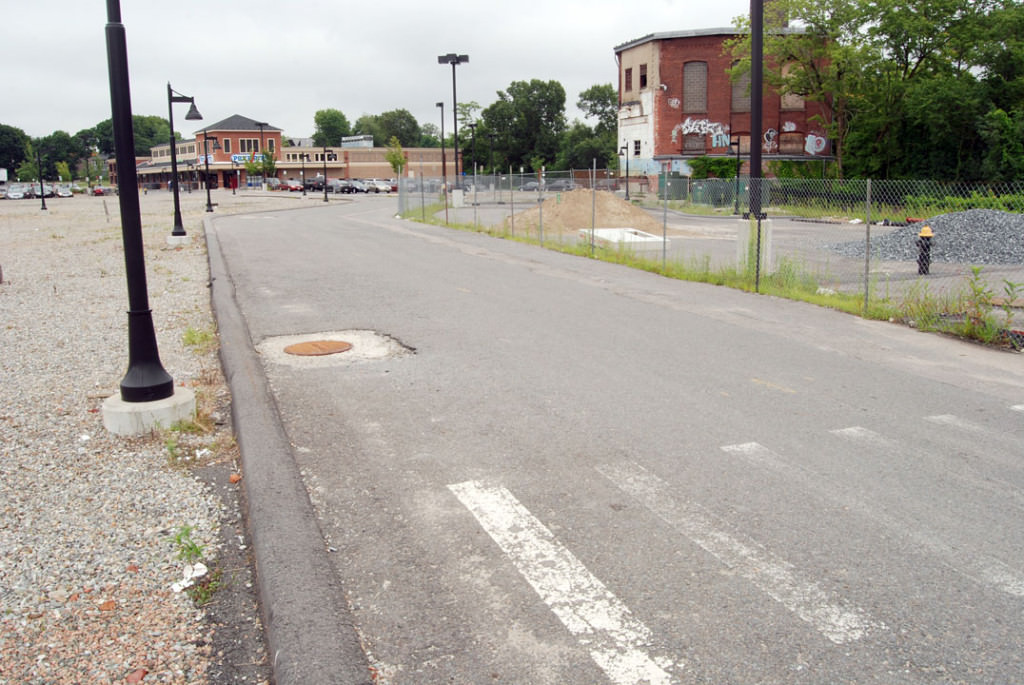 The bank and supermarket opened in 2010, and in the last month, the steel for another building went up right beside the dam, a large two-story box which will reportedly have a Dollar Tree on the ground floor facing the parking lot and perhaps a restaurant or similar tenant up above and at grade beside River St. 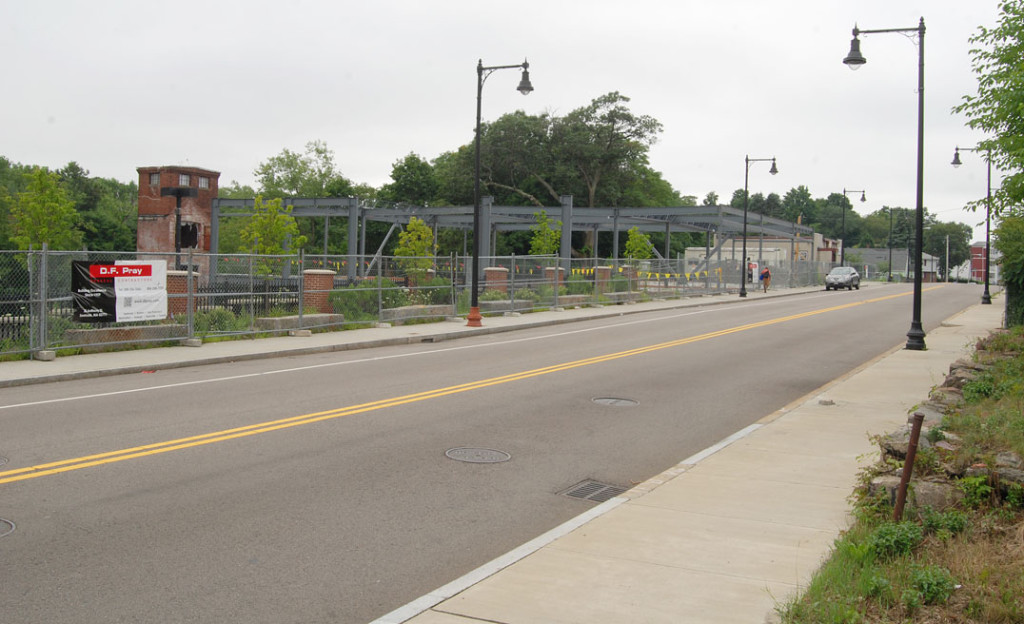 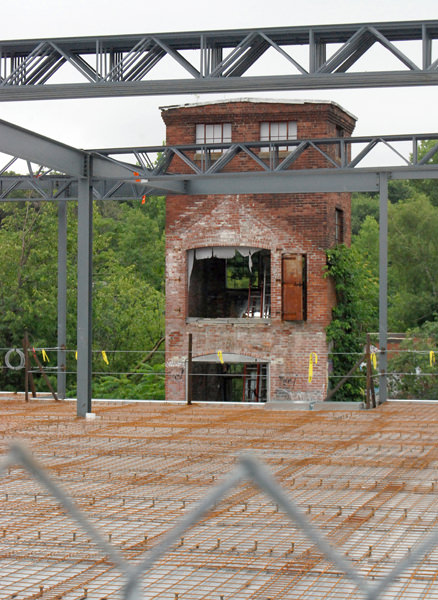 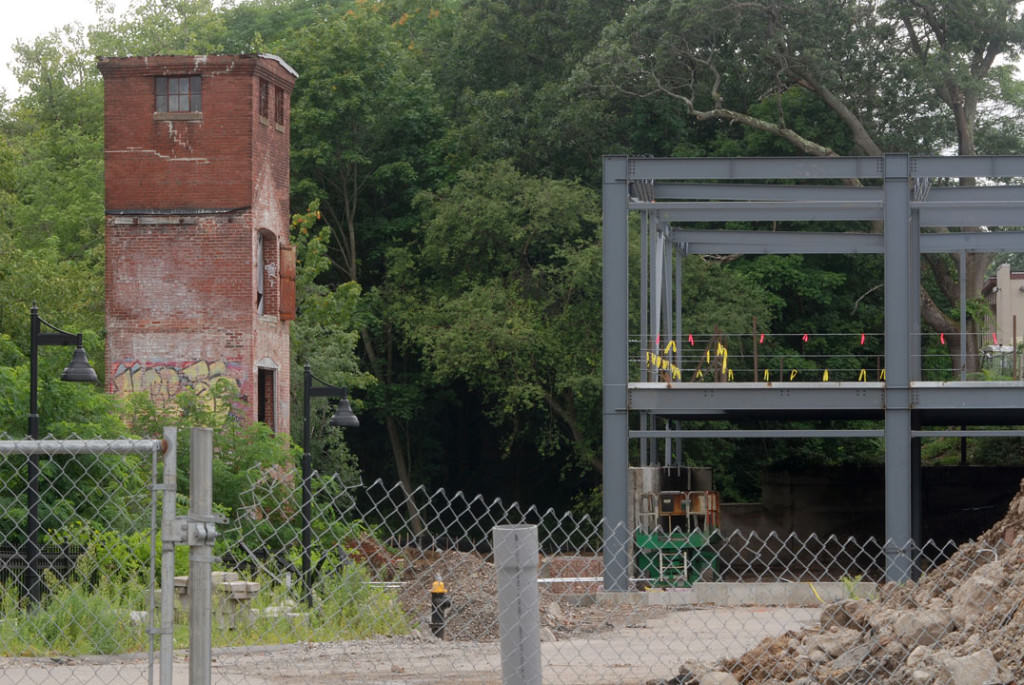 Does this mean paddlers will now be able to portage the Hyde Park side of the dam? Evidently not; the immediate bank is as rubbly and overgrown as ever, but instead of a mill looming over it, it has a new retaining wall topped by a waist-high fence–great for views of the river, not so great for humping canoes. Indeed, it looks as though the developers preferred to simply pull away from the bank rather than attempt to incorporate it in the project. In honor of what was, they didn’t touch the iconic three-story brick tower that anchors the end of the dam or the bulkier steam plant downstream, whose mighty brick chimney still dominates the area.

In the meantime, the dam itself has deteriorated further. Up until recently, the dam’s owner, the state Dept. of Conservation and Recreation, usually kept the Milton-side gate raised, confining flows to the Hyde Park-end in dry weather, but the latter gate tended to slip, and frequently had to be cranked up again, which cut-off flow until the river overtopped it. Now it looks as though the agency has decided the Hyde Park gate is not worth repairing, because a series of holes has been punched into it, and these now discharge the river’s entire flow except during high water. 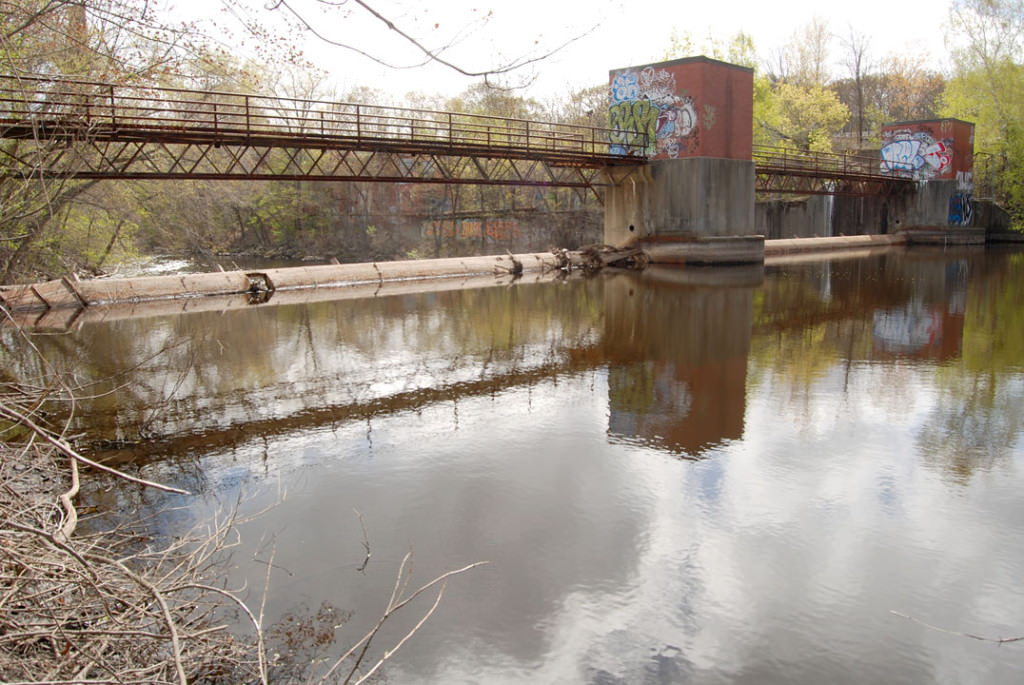 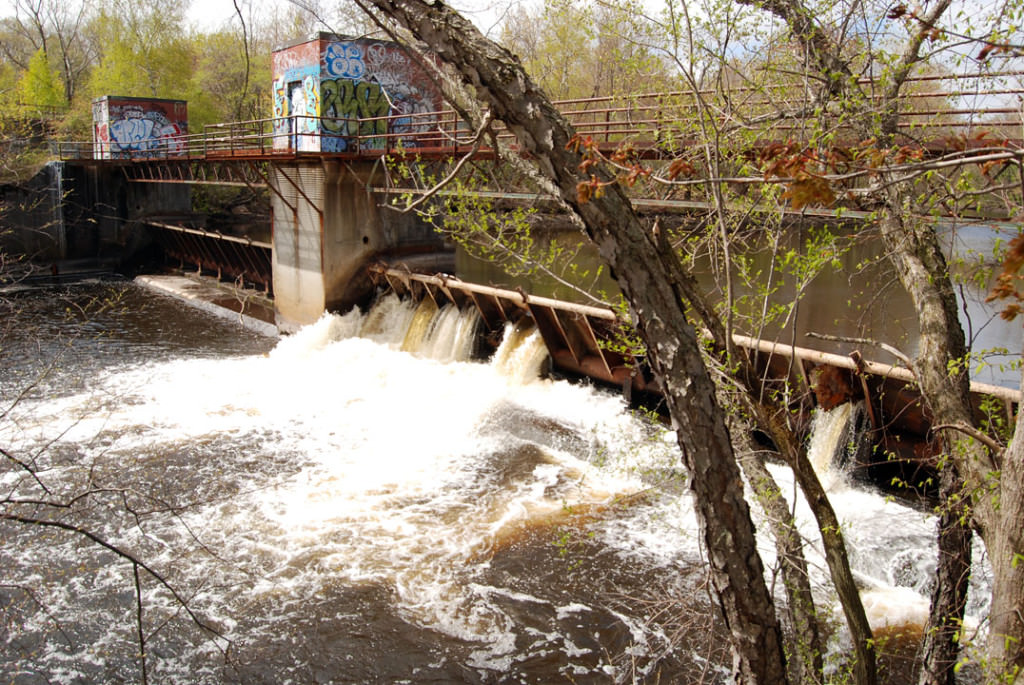 I am not a dam expert, and don’t know why the rebuilt dam was equipped with gates approximately fifty years ago, not long after Hurricane Diane blew out its predecessor in August 1955. The gates allowed DCR to vary the elevation of the river behind the dam over a range of five feet or so, a function presumably useful to the adjacent mill, which would continue to operate off and on until 2004. But the holes in the gate have dropped the pool behind the dam to a new and somewhat lower elevation, exposing the former high-water mark as a deep incision on the Milton bank just upstream. 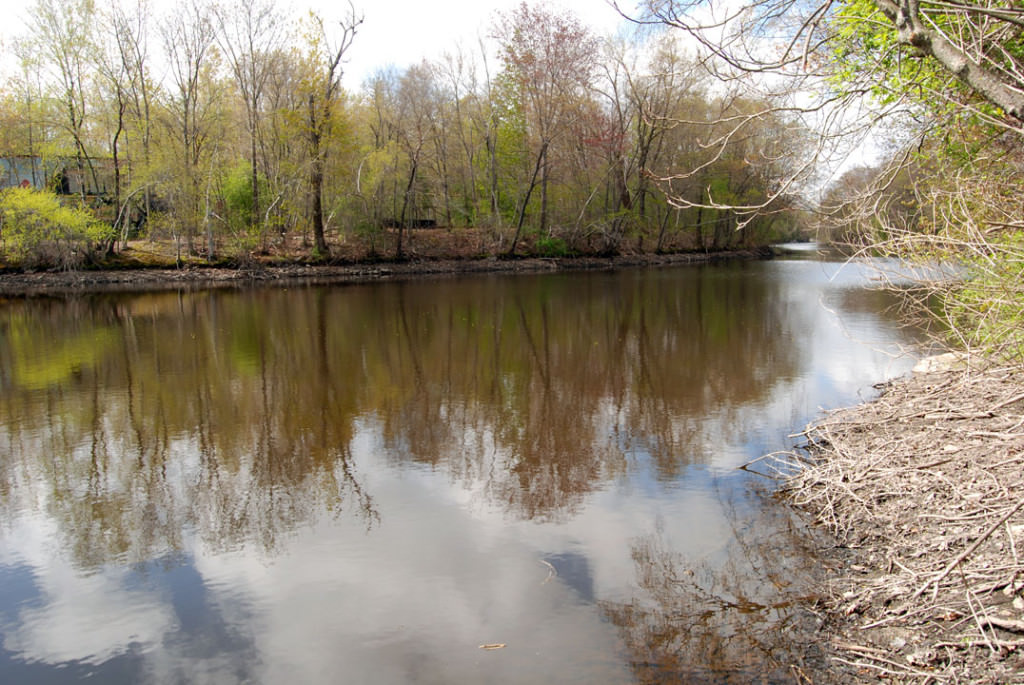 If you are eager, as I am, for the dam to come out entirely, so that the Neponset can once again glitter with ocean-going fish running upstream to spawn, you can’t be displeased that it’s not being maintained. Hey, you might even wish it would fall apart quicker. Now that the Hyde Park side of the dam is being spiffed up and made over, and more and more people are coming to the site, here’s hoping that the river will get some attention as well.