Observing the Drought’s Effect on the Neponset

According to the Blue Hill Weather Observatory, the watershed received 2.80 inches of rain in the months of June and July compared to 7.01 inches for the same time frame last year.

A tributary of the Neponset affected by drought

As you may have heard or read recently on our website, Massachusetts is experiencing a drought this summer, with the Neponset watershed categorized as an area facing “severe drought”.

Even during an average year, stream flows in the Neponset are heavily impacted by water withdrawals, loss of groundwater recharge from paved areas, and groundwater that leaks into aging sewers and gets carried away. But this year’s rainfall shortage has made the situation much worse than usual. Staff and volunteers have visually observed the effects of the drought firsthand, with water levels along the Neponset River and its tributaries being markedly lower than usual. It has also made sampling for our monthly Citizens Water Monitoring Network challenging this summer.

Another drought indicator is low water discharge, which is a measure of the amount of water flowing through a particular area along a waterway. The U.S. Geological Survey (USGS) has stream gauges in the river that continually measure the water discharge throughout the day. 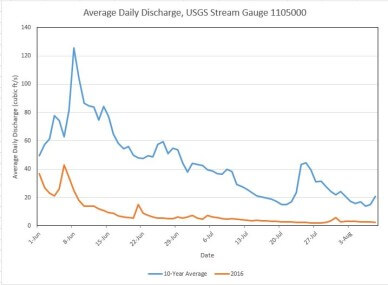 Data from this graph was obtained from the USGS stream gauge 01105000. It is located on the main stem of the Neponset River in Norwood, 200 ft upstream from Pleasant Street Bridge. The graph shows discharge measurements from June 1 through August 8. The blue line represents the 10-year average by day from 2005-2015. The orange line represents measurements from this year.

From the graph above, it is clear that the decreased precipitation this summer has had a dramatic impact on the river’s discharge rate. The usual spike in discharge observed at the beginning of June was nearly 100 cubic feet per second less than the average. It is likely parts of the Neponset River could dry up completely by late summer. 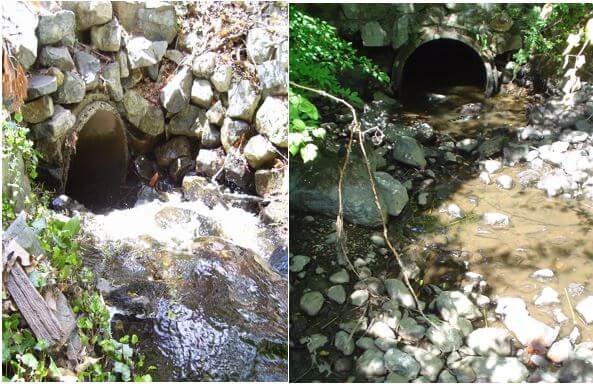 Drought can have significant effects on a watershed. Not only is surface water scarce, but it also greatly impacts the amount of groundwater that’s available. Low water levels puts tremendous pressure not only on the 120,000 people who use Neponset Watershed groundwater as a drinking water supply, but on wildlife as well.

Click here for tips on how you can help conserve water during the drought.

2 responses to “Observing the Drought’s Effect on the Neponset”