In late March, smelt wait for the water temperatures to pick-up before beginning their spawning runs up the creeks that lead from Neponset Estuary. 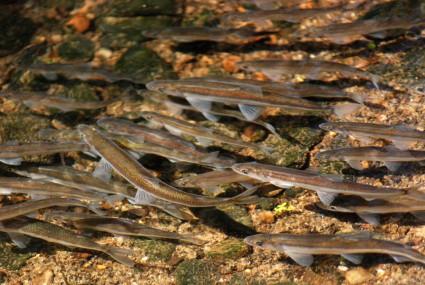 As described on the Gulf of Maine Research Institute website:

Temperature observations by the Massachusetts Commission show that the first smelt appear on the spawning beds in Weir River, a stream emptying into Boston Harbor, when the temperature of the water rises to about 40-42°.[13] This may take place as early as the first week in March or as late as the last, about Massachusetts Bay, depending on the forwardness of the season and on the particular stream. The chief production of eggs takes place in temperatures of 50-57°, and spawning is completed in Massachusetts waters by about the 10th or 15th of May, year in and year out. East of Portland, smelt seldom commence to run before April, and continue through May. In the colder streams on the southern shores of the Gulf of St. Lawrence they do not spawn until June. On the other hand, they may commence spawning as early as February along the southern New England coast west of Cape Cod.

As a rule smelt do not journey far upstream; many, indeed, go only a few hundred yards above tidewater, whether the stream be small or large. Thus Dr. Huntsman informs us that the smelt that enter the estuary of the Stewiacke River, Nova Scotia (a tributary of the lower Shubenacadie, near the head of the Bay of Fundy) spawn only in the tidal part. And some spawn in slightly brackish water in certain ponds back of barrier beaches (e. g., Straits Pond, Cohasset, Mass.). But flooding with salt water, which sometimes happens, kills the eggs.

The adult smelts return to salt water immediately after spawning to spend the summer either in the estuary into which the stream in which they spawn empties or in the sea close by. On the Massachusetts coast north of Cape Cod all the spent fish have left fresh water by the middle of May, earlier in some years. On the Maine coast, too, a good proportion of the spent fish are in salt water by the first weeks in May; thus we have seen a bushel of large smelt taken in a weir at Cutler (near the mouth of the Grand Manan Channel) as early as May 4.

The eggs average about 1.2 mm. (0.05-inch) in diameter and they sink to the bottom, where they stick in clusters to pebbles, to each other, or to any stick, root, grass, or water weed they chance to touch. According to the Manual of Fish Culture a female weighing as little as 2 ounces will produce between 40,000 and 50,000 eggs;[14] The eggs of the closely allied European smelt (Osmerus eperlanus) hatch in 8 to 27 days, according to temperature, and the incubation period of the American fish is the same probably, for smelt eggs are reported as hatching in 13 days at the Palmer (Mass.) hatchery.

Smelt populations have been in decline. As noted in the MA Division of Marine Fisheries’ “Technical Report TR-5: Rainbow Smelt (Osmerus mordax) Spawning Habitat in the Weymouth-Fore River” by Bradford C. Chase and Abigail R. Childs, Annisquam River Marine Fisheries Station, September 2001, there has been:

“…a region-wide trend of declining smelt populations during the last 15-20 years. The causal factors for this trend are not well identified. Structural impediments of adult smelt migrations to spawning habitat and the chronic degradation of spawning habitat from stormwater inputs are common concerns for many river systems in Massachusetts Bay that support smelt.”