Lessons from a Tough Summer for the River 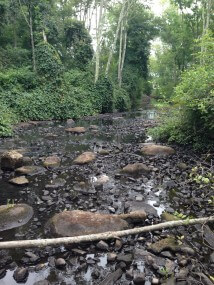 The drought of 2016 will go down as one for the record books in the Neponset Watershed, with the lowest average flows in 76 years of record keeping in July, August, and likely to set records this fall.

The impacts on the river have been significant. As this photo of the Neponset in South Walpole during August illustrates, drought means a loss of aquatic habitat: if it’s not underwater, fish and other aquatic life can’t live there. The impacts cascade up the food chain to birds, mammals, and recreational users alike.

Of equal concern is that a dry river indicates challenges aren’t far behind for the 120,000 people who get some or all of their drinking water from wells, since those wells tap the same underground springs that feed the river.

The main driver of this year’s low water is of course lack of rain, but the drought highlights the problems that make stream flow an issue every year in the Neponset Watershed: water withdrawals, loss of recharge due to pavement, and the way we manage our “used water” (aka sewage).

That makes it a good time to think about how we should be responding to these issues in the long term, especially given that climate change is expected to lead to hotter summers, less of the gentle rain that recharges our underground aquifers, and short but intense droughts every few years.

We’re working with the Mass Rivers Alliance (www.massriversalliance.org) and our communities to pursue three key solutions: