Anticipating the expansion of the Neponset River Greenway - a gem of a community resource - from Milton into Mattapan Square. 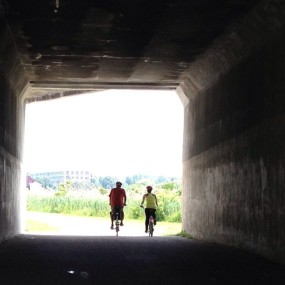 Cyclists on a Sunday morning ride pass beneath the trolley line on the Neponset Greenway, June 23, 2013.

This summer, the Patrick Administration announced state funding for design completion of the Neponset Greenway extension.

Already a popular linear, waterfront park, the extension of the greenway – pushing the paved path beyond Central Ave. and Elliot St. in Milton, to Blue Hill Ave. in Mattapan Square – will make the corridor ever more useful, and connect more communities and points of transit, like MBTA stops.

Since 2002, Boston residents have enjoyed the paved path that runs alongside the Neponset Estuary and adjacent parks, for strolling, biking, plain old enjoying the outdoors, launching small boats into the Neponset Estuary, socializing, and commuting.

The path follows the route of former RR tracks and stretches from the mouth of the Neponset at Tenean Beach in the Port Norfolk neighborhood of Dorchester, through Pope John Paul II Park (opened in 2001 – includes sports fields and walking paths; it used to be a landfill and a drive-in movie theater!), through Neponset II Park (opened in 2006 – includes a boat launch and water fountain park!), along a salt marsh and the trolley line, past Lower Mills and the old Baker Chocolate factory buildings, to Central Ave. and Eliot St.

Eventually, the Neponset Greenway will extend past Central Ave. and Eliot St., to Mattapan Square – linking the greenway with another MBTA stop and a busy retail center surrounded by homes and service centers like a library, school, churches and health service centers. This path extension also will put path-users on a direct route to the Blue Hills Reservation.

Meanwhile, on the Quincy Neponset riverbank, we’ve been developing a parallel greenway and paved path – the “Quincy RiverWalk.” By next spring, users should be able to explore this greenway and also cross between it and the Neponset Greenway via the Neponset St. bridge.