Eagle sightings along the bank of the Neponset River in Milton are encouraging signs that the river is getting healthier. 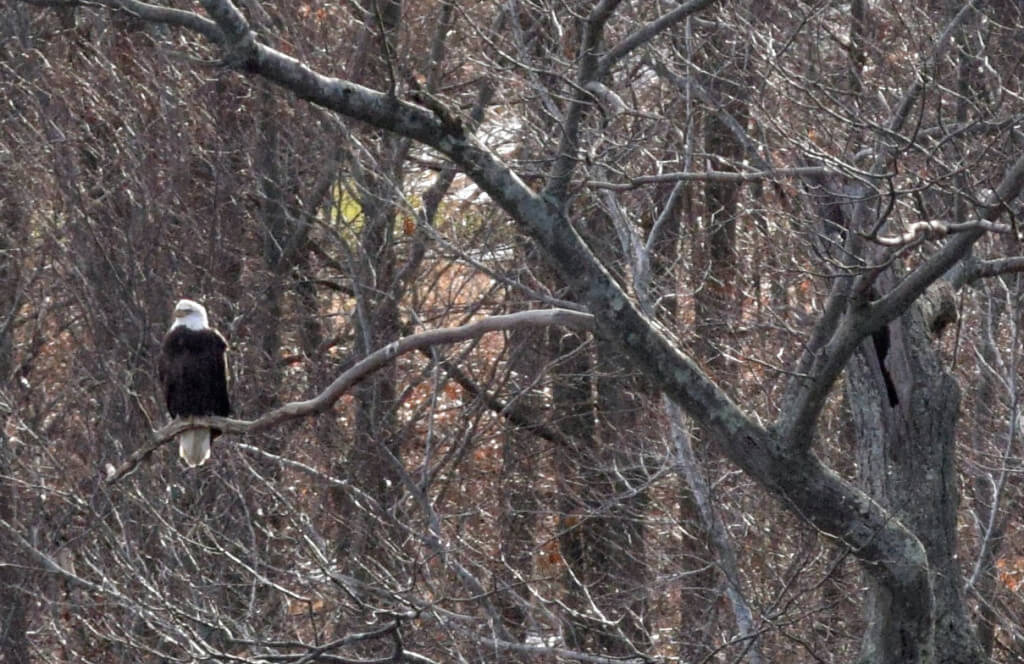 Sighted on January 28 on the bank of the Neponset River in Milton, below Governor Hutchinson’s Field. Photo taken by NepRWA’s Tom Palmer. 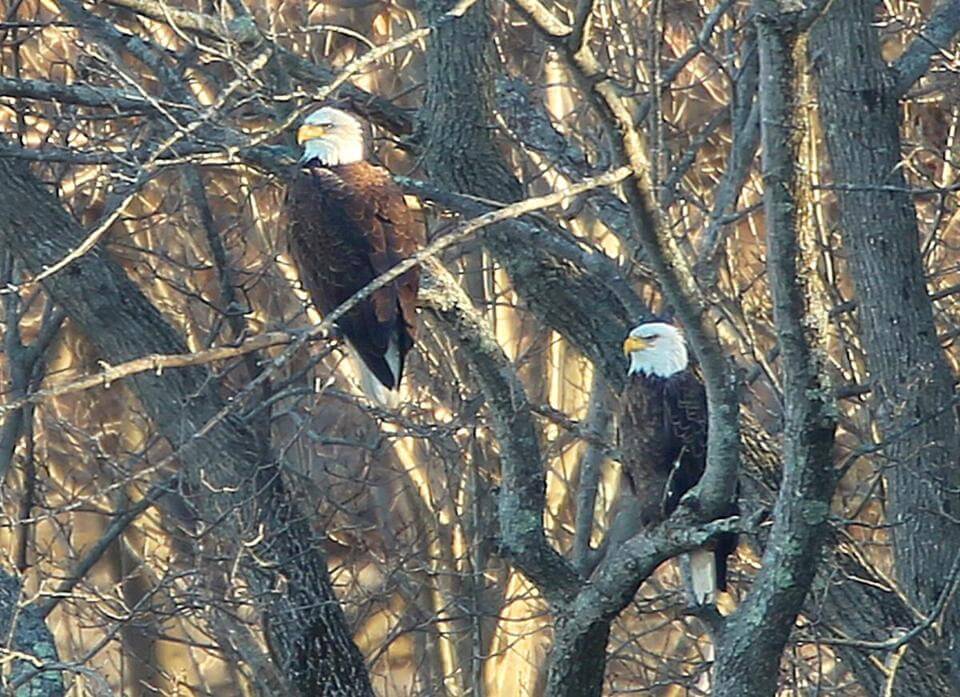 Two bald eagles sit in a tree along the Neponset River shoreline in Milton. Photo by Boston Globe staff photographer, John Tlumacki. NepRWA Board member and Neponset neighbor, Terry Dolan, has affectionately named the two eagles, Sam and Abigail, in a nod to the Adams Street area of Milton, near the Neponset River.

Reprinted from the Boston Globe:

For his entire life, Tom Palmer has been jealous of people lucky enough to spot a bald eagle soaring through the sky or clutching the limb of a tree high above the ground.

But the Milton resident no longer envies a soul.

On Wednesday, Palmer, who works for the Neponset River Watershed Association, not only witnessed one of the noble birds in his neighborhood’s backyard, he also captured photos of it.“I had never seen one in my life before,” the 60-year-old bird enthusiast said in an interview. “It’s exciting. These are American icons.”

Palmer’s sighting marked the second time in less than 10 days that someone locally had witnessed the giant birds of prey, with their impressive seven-foot wingspans, frolicking in their natural habitat.

Two bald eagles, their white heads visible from a distance, were seen on Jan. 21 on the frozen Charles River, not far from the Longfellow Bridge. Photographs of the birds were shared to the community message board, Reddit.

Residents in Arlington have also reported seeing the birds, at Spy Pond.

Palmer’s sighting came this week on the banks of the Neponset River in Milton, just below Governor Hutchinson’s Field, a hilltop nature reserve owned by the Trustees of Reservations.

“It was high atop the trees,” Palmer said. “I think more and more people are seeing them. They are too big to escape notice.”

Jeremy Bick, stewardship manager for the Trustees’ Boston region, said employees of the nonprofit have seen their share of bald eagles, from time to time, near Hutchinson’s Field during the past two years.

“When we see them out there, we get excited about it,” he said. “It’s different from just seeing the red-tailed hawks, or the osprey. The bald eagle is much cooler.”

He said other sightings have been reported in Jamaica Plain, around the pond.

The species was reintroduced in Massachusetts at the Quabbin Reservoir in 1982. The first nest in the wild with eaglets was reported in 1989. As numbers grew, the winged predators’ status here was changed from “endangered” to “threatened” in 2012.

State officials say there were around 46 eagle territories — two eagles that are probably mated, or are going to mate — in 2014, the latest data available. But they are confident that that number has grown.

Marion Larson, chief of information and education at the state Division of Fisheries and Wildlife, said eagle sightings increase in the winter, because birds are coming down to Massachusetts from northern New England and Canada, where rivers and lakes may be frozen, for better access to food.

“It’s great to see eagles in Boston and in Cambridge,” Larson said.

One response to “Eagles Spotted along Neponset River”