Beavers return to the Watershed, and other interesting finds

There is always something going on with nature, particularly in our highly tracked-up and paved-over version...

Leave it to Beaver 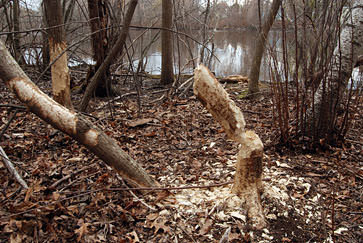 Beavers have returned to the Neponset Watershed.

Up until a year or two ago, the Neponset River watershed was home to about 330,000 people–and no beavers.

That’s no longer the case. As recently reported in the Canton Citizen, beavers have returned; they built a dam on Ponkapoag Brook where it borders the Milton-Hoosic Club. Presumably they have a lodge nearby and are huddled inside, chewing up the aspen and alder twigs they stashed underwater for the winter.

How did they get there? Beavers have been on the lower Charles for years, and recently moved to its headwaters in the Norfolk/Wrentham area. Evidently one or more wandering youngsters found their way to Canton. Since there are plenty of wooded floodplains in the watershed, we can expect them to set up housekeeping in many places, and plague us with the drowned driveways and backed-up septic systems that are already familiar in Boston’s northern and western suburbs.

But I’m not complaining.  Like many people, I want to live in a place whose inhabitants are not limited to humans and pets–what fun is that? Wild plants and animals are always looking for new habitats to occupy and, other things being equal, I’m not sure it’s up to us to police them.

Fiddlers in the Marsh

This past September, I was touring the Neponset’s marshes above Granite Avenue in Dorchester with some UMASS grad students, and one of them picked up something I hadn’t seen since my long-ago summers on Long Island Sound–a fiddler crab. These peanut-sized marsh-peat burrowers eat algae and organic debris, and the males are utterly distinctive thanks to a single pale enlarged claw. One of the students told me that warming ocean temperatures had allowed them to move north of Cape Cod and that they had recently spread as far as New Hampshire. He pointed out dozens of tiny pinhole tunnels dug by juveniles in the banks of the creek we were standing in.

Curiously, nobody said “They don’t belong here and will make it even harder to restore the marsh.” The line between a harmful invasive and an engaging newcomer is not always easy to draw–are there rare natives that will be put at risk by the fiddlers? I don’t know–that could indeed be the case, though probably not in Dorchester, where the two most conspicuous crabs are already foreigners: the European green crab and the Asian shore crab.

In August a similarly ambiguous immigrant showed up in Willett Pond, NepRWA’s 200-acre impoundment on Mill Brook in Walpole. It’s a submersed aquatic plant called bushy pondweed (Najas guadalupensis), and I was alerted to it by shoreline resident and MIT undergrad Sean Burchesky, perhaps the pond’s keenest observer. He saw its wiry, thin-leaved stems completely filling the water column in four of five feet just outside the cove at the pond’s northwest corner, and said he’d never seen it before.

I dredged some up from a canoe and brought it home to ID, learning that it was native to much of North America but was introduced in Massachusetts, and that it provided food for waterfowl and shelter for fish and invertebrates. I had never seen it in Willett or anywhere else. Was this good news or bad? Later another pond resident told me it had fouled his trolling motor.

In part because it already occupied large areas around the cove, I didn’t come back and try to rake it all out. Willett has about thirty species of aquatic plants, including formidable invasives like water milfoil, and yet none dominates or prevents users from fishing or swimming. My only plan is to keep an eye on it and see if it continues to expand. Am I a wuss?