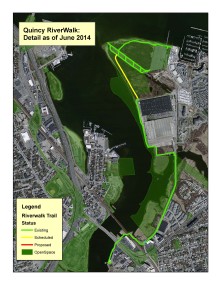 Boston has the Neponset Greenway and the Harbor Walk, and now Quincy is about to have its own two mile long waterfront walkway: the Quincy Neponset RiverWalk!

It’s taken more than a decade for NepRWA and others to put all the pieces together, but construction is about to begin on a critical link in the northern section of the RiverWalk, which will run from Boston Scientific Corporation to Squantum Point.

Virtually all of the parcels on which the RiverWalk are built are privately owned properties, except for Squantum Point Park, but NepRWA was able to negotiate deals with all the property owners to gain public access to the waterfront. Sometimes this was relatively easy, as with the Boston Scientific Corporation, on whose land more than half of the two mile long RiverWalk lies. With others not so easy.

It took ten years from the time NepRWA reached a “Settlement Agreement” with the developer of Neponset Landing on Hancock Street, until he finally extended the RiverWalk from Adams Inn, across Neponset Landing, under two bridges and out to Commander Shea Boulevard, which is owned by Boston Scientific. The final link from Boston Scientific to Squantum Point was enabled by a Quincy Community Preservation Act grant and by a contribution from the Neponset River Watershed Association.